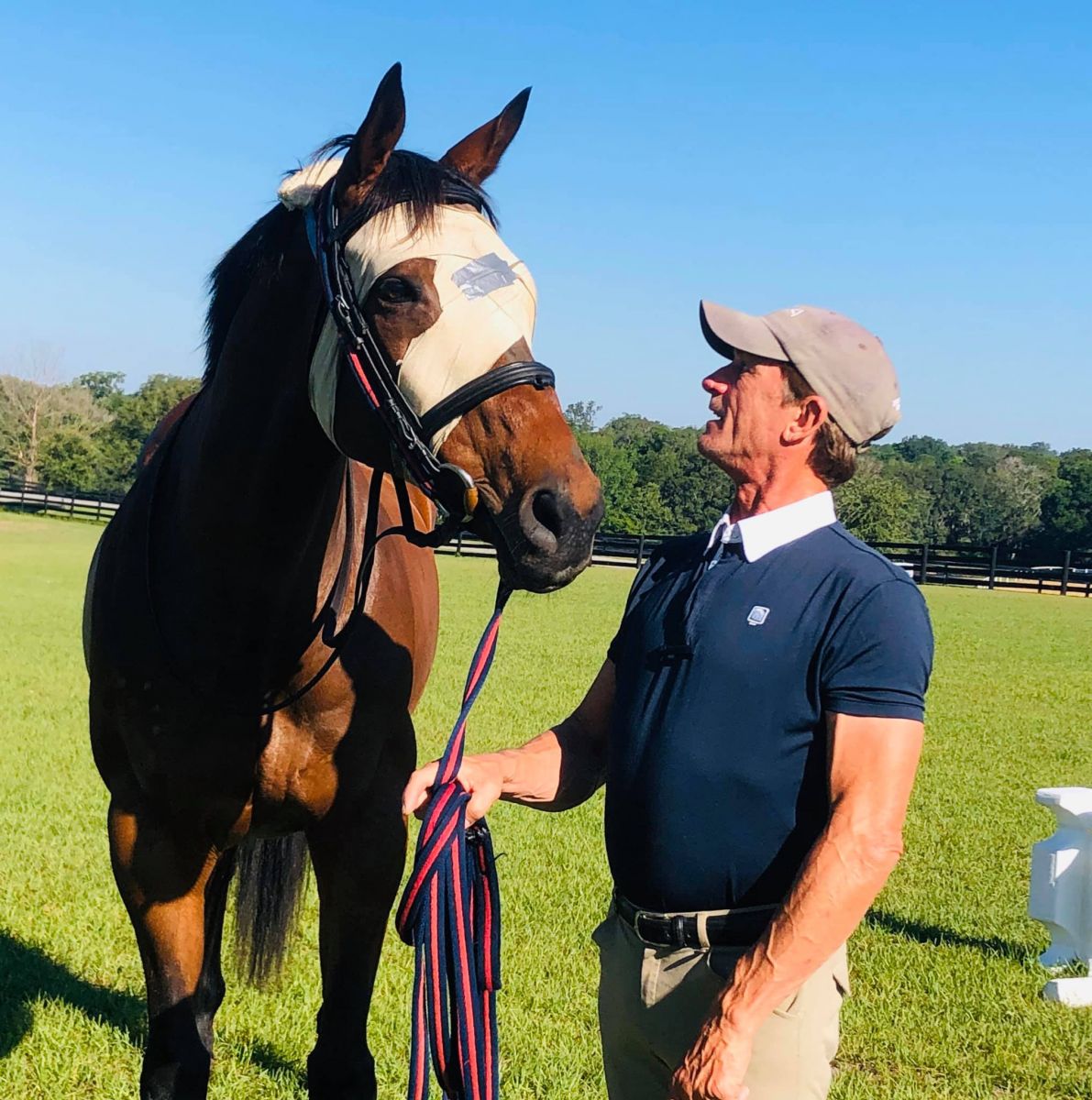 On Wednesday of this week, Rick Wallace shared the news that his former four-star horse, Ultimate Victory, lost an eye due to an accident in the cross ties. The 17-year-old Thoroughbred spooked, pulled back and was hit in the eye with the clip — unfortunately, the eye ruptured. It was removed an hour and a half later at Peterson-Smith Equine Hospital in Ocala.

Rick has been chronicling “Cody’s” injury and recovery on Facebook, and his latest post is concerned with reducing the risk in cross ties.

“I am so grateful for all the incredible outpouring of support for Ultimate Victory AKA ‘Cody.’ He is truly resilient and now is the time for me to advocate for the reason it happened and how to reduce the risks of it happening to you.

“We had — and I use the word had — several cross ties made of bungee cord — BIG NO NO. Cody — 17 and been there done that — is spooky; on his accident day, in bungee cross-ties, a broom fell over and he pulled back in the cross ties.

“We use hay-string for break away but the full extent of bungee occurred. Thus it snapped and catapulted straight at him, with blunt force of metal clip hitting his left eye.

“The result was devastating. So proud of my quick acting Walter, my barn manager, and my vet team — and he is on the mend — missing his left eye.

“All cross-ties are now nylon, with hay string. Cody will, no doubt, be back out competing soon!

“Please get rid of all stretching cross-ties and reduce the risk of what happened to Cody!”

We wish Cody a swift recovery and return to the sport. He has been plenty active in recent years, most recently contesting the two-star level with Briggs Surratt and readying for a move to Intermediate. With Rick, he went Advanced and his top finishes include being in the top eight at the AEC two years in a row at Intermediate. Rick describes him as his “soul mate and confidant … He has been sold twice and came back to me after each time through some weird magnet he had inside — it seemed he only wanted to be with me.”

Rick gives credit to his veterinary team at Peak Performance Equine Services, made up of Dr. Jill Copenhagen, Dr. Lisa Casinella and Dr. Alyson Baber, as well as the ophthalmologist, Dr. Brooks, who performed the surgery.

Cody’s indomitable spirit has never been more apparent — yesterday Rick posted video of Cody chasing him for a carrot and turning to him on his blindside, and on day three post-surgery he was working on the lunge.

“My resilient four-star partner will no doubt accept this new challenge and we are hopeful he can resume his eventing career — although he owes us nothing and we owe him everything!,” Rick says.