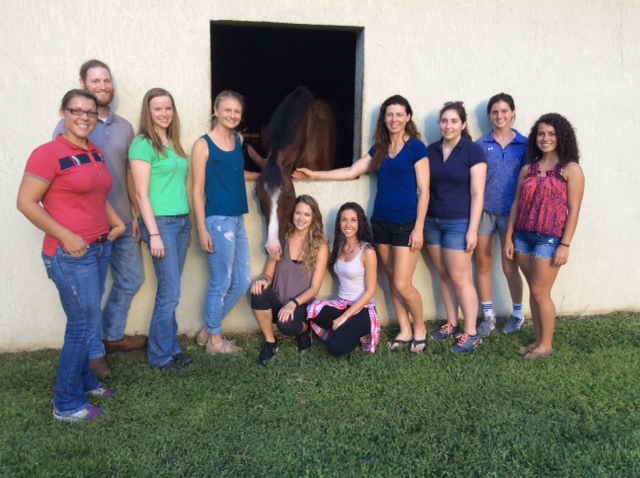 The University of Florida Eventing Team. Photo by Pam Johnson.

The idea of bringing an eventing team to the University of Florida was first kicked around at the end of the fall semester in 2015.  With the rise of collegiate eventing, adding a team at UF made sense. We have a very strong pre-vet and equine program and are 40 minutes from Ocala, one of the biggest eventing centers in the country.

In the spring of 2016, the UF Equestrian Club voted Anna Moscovitz and Ted Britten-Kelly to be co-captains, and I am honored to be the inaugural coach. The UF team operates under the larger umbrella of the UF Equestrian Team.

First, we registered UF with the USEA Intercollegiate Program as an affiliate university. The USEA’s Intercollegiate program is brand new and still has that new car smell. Then we started looking for competitions to attend. There are several Intercollegiate Challenge competitions set up in Area III, including at Poplar Place and Chattahoochee Hills, but there were none in Florida.

The team also took a look at the viability of competing at schooling shows in the area. We knew we were going to have a broad range of riders with different experience levels, and we wanted to have options for riders new to the sport but also be able to meet the needs of the more skilled and experienced riders, and we wanted to be able to compete against other universities.

After some thought, the founding members agreed to take a move out of Field of Dreams. If we build it, they will come. In early August, we reached out to Richard Trayford of Equiventures. To our great delight, he enthusiastically supported the idea of an Intercollegiate Challenge in Florida and agreed to host us at the Ocala Fall Horse Trials on October 15 at the Florida Horse Park.

We currently have one UF team registered for this competition with two Beginner Novice riders and one Preliminary level rider. We are waiting to hear which other schools will be fielding teams, but we are up and running and off to a great start.

As intercollegiate eventing is relatively new, there are not very many places that run Intercollegiate Challenges. This may seem like a negative, but it allows us room to build, in both the quality and quantity of competitions and in the number of schools that participate. This year, in preparation for the Oct. 15 challenge, co-captain Ted Britten-Kelly started reaching out to other schools with known programs, as well as every Florida school that runs an equestrian program.

The Ocala region is the center of a large number of rated and unrated horse trials. There are usually two schooling shows every month within a one-hour drive at Longwood, Rocking Horse and the Florida Horse Park. Additionally, during the fall and winter season there are plenty of sanctioned USEA horse trials at the Florida Horse Park and Rocking Horse.

We also have the brand new CIC3* at the Ocala Jockey Club over Thanksgiving weekend, as well as two events at Three Lakes at Caudle Ranch in Groveland in January and February. Ted also approached UCF’s Eventing Team captain about approaching Caudle Ranch to turn one or both of their winter shows into Intercollegiate Challenges.

With such a large number of events taking place and the fact that college eventers will travel greater distances than other equestrian teams to compete, it is only a matter of time before Florida’s other schools start forming their own teams. The number one concern Ted heard from other schools who don’t yet have eventing teams is the lack of eventers in their clubs.  From our experience with forming UF’s team, if the school has an eventing team, the students that event will join.

With our mild weather and excellent access to top caliber shows during the school year, we have no doubt that Florida will become the top spot for collegiate eventing in the country.