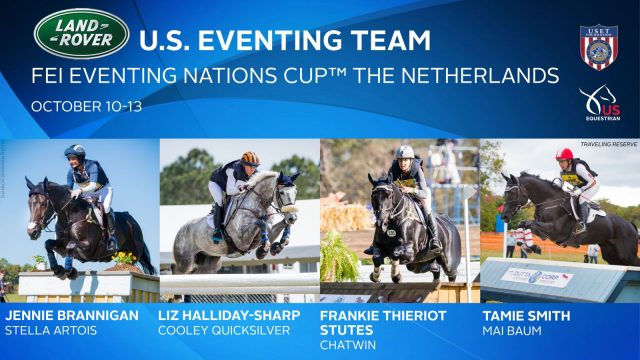 US Equestrian has just named the U.S. Nations Cup team for Boekelo CCIO4*-L, which takes place Oct. 10-13, in Enschede, the Netherlands. Erik Duvander will serve as the chef d’equipe.

The following combinations have been named as alternates:

Boekelo also serves as a test event for the Tokyo 2020 Olympic Games. The competition is testing the new Olympic team format, which means there are only three riders on the team and no drop score.

Under the new Olympic team format, the traveling reserve is still a very critical fourth member of the team. The way Boekelo is testing the format will differ from the Olympics, as the reserve for Tokyo will only step in should one of the three team horses be unable to continue on to the next phase (due to elimination, unsoundness, etc). For Boekelo, the traveling reserve will compete in all phases, and their score can be substituted in as a counting score should one of the three team members be unable to continue (due to elimination, unsoundness, etc.)

There are a number of rules that dictate how substitution will work at the actual Games. Full FEI Regulations for Equestrian Events at the Olympic Games are available here. Click here for a direct link to the Games rules. View more information about the FEI Eventing Nations Cup the Netherlands here.