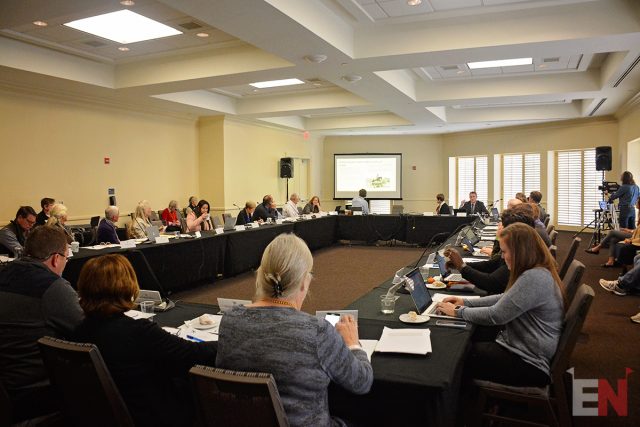 The first meeting of the Board of Governors took place this afternoon at the USEA Annual Meeting & Convention. Photo by Jenni Autry.

The 2018 USEA Annual Meeting & Convention officially kicked off today at the Sheraton New Orleans in Louisiana, with the first of the weekend’s Board of Governors meetings punctuating the day’s action.

USEA President Carol Kozlowski noted that 2018 was a year of transition and change in many regards. Perhaps most notably, severe weather across the country impacted the season throughout the year, with numerous competitions being abandoned completely or partially due to rain.

A total of 39,579 starters competed at 221 USEA events in the 2018 season, which is a decrease of 3,272 starters or 7.6% from last year. USEA Treasurer Morley Thompson noted in his address to the board that the vast majority of the reduction in starters took place at the USEA National levels, with the FEI levels largely unaffected.

The subsequent loss of starter fees resulted in nearly $69,000 in revenue loss for the USEA.

“Unless you start down centerline (in dressage), the USEA does not consider it a start, so the starter fee is lost,” USEA CEO Rob Burk explained.

Morley said that the USEA trended behind budget all through the year and predicted a year-end loss, which ultimately came to a $100,000 loss.

“My hope is we will see a rebound next year,” Morley added.

The University of Kentucky has studied rotational falls for more than a decade in partnership with the USEA, with the latest renewal of the study focusing on understanding when and how rotational falls occur through the use of computer simulations.

Dr. Suzanne Smith, a mechanical engineering professor at the University of Kentucky, and Shannon Wood, a UK mechanical engineering Master’s student, presented today on the simulation model developed by the university. The end goal, Suzanne explained, is to develop design criteria for safety fences for course designers, builders and frangible device developers.

The latest FEI Risk Management Program Statistics Report recorded that 721,385 fences are jumped each year on FEI cross country courses. A total of 279,897 jumps (38.7%) make contact with the horse via a hoof strike, foreleg or rear leg.

The University of Kentucky’s computer simulation focuses solely on forearm contacts, essentially “only looking at the situations where (horse and rider) are in trouble,” Suzanne explained.

Stephen Daub of SAP Equestrian Analytics shared two data sets used from helmet cams at the Event Rider Masters series with the University of Kentucky, which will also be used to further the work of the simulation. “The more technology that is available and used will provide us with more information,” Suzanne said.

With the computer simulation now successfully developed, the University of Kentucky will continue their research into 2019, adding that this work would not be possible without the generous support of donors like Ms. Jacqueline Mars.

Sarah Broussard, chair of the USEA Safety and Equine Welfare Committee, added “we are always looking for new things to make the sport safer.”

There are currently 334 collegiate USEA membership, which is more than 100 over last year. Additionally, there are 30 USEA affiliated colleges and universities. The Intercollegiate Championship at Virginia Horse Trials saw record numbers this year, with nearly 90 students from 18 schools competing. The Championship has grown every year and we’re expecting another spike in entries at the 2019 Championship, which will take place at Chattahoochee Hills in Fairburn, Ga. in May.

In 2018, the Intercollegiate Committee completed two major projects. One was an outreach project that provided details about the intercollegiate program and how to get involved to more than 660 schools with potential interest in the program. The other was developing and publishing the Intercollegiate Handbook, which includes Championship eligibility requirements, guides for students to form teams and for organizers to host team challenges, and more. The Handbook is available on the USEA website at this link.

In 2019, the Committee will focus their outreach efforts on a more “local” level by communicating and support event organizers, Young Rider Coordinators, ICP instructors and area trainers in order to spread the word and grow the program. They will also be exploring the prospects of grants or scholarships for students.

Jackie LeMastus, a University of Kentucky student and member of their eventing team, was in attendance at the open forum and shared her experience of competing at the Intercollegiate Championship and how being a member of the team has enriched her college years.

Looking Ahead to Friday

Remember you can watch a bulk of the meetings, awards and seminars on the USEA Convention live stream. Click here for all the details on how to watch live.

In the meantime, the EN crew is off to the USEA Board of Governors Reception. Keep it locked on EN for everything you need to know from New Orleans. Go Eventing.