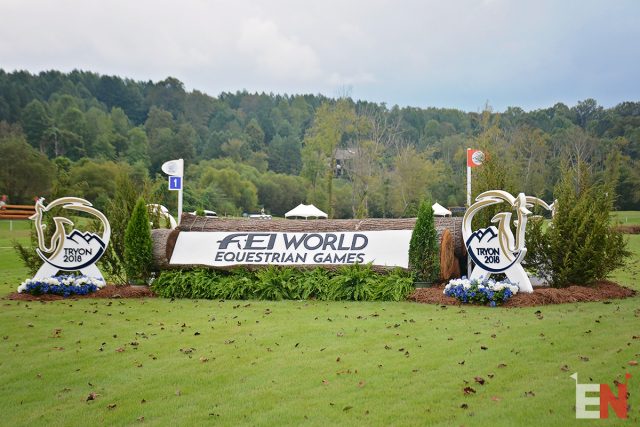 A review panel is a convention tradition during championship years, and we enjoyed an insightful discussion of the 2018 Tryon World Equestrian Games yesterday at the USEA Annual Meeting & Convention in New Orleans, Louisiana.

Sam served as pathfinder on Ireland’s silver-medal winning team, and as co-founder of EquiRatings he attended the USEA Convention to present an annual review. It was extremely interesting to have the perspective of a rider from a different country, aided also by the fact Sam stuck to his own guidelines for speaking on the panel: “Know your audience and don’t be the smug Irish guy.”

Dr. Mark Hart, FEI Chief Medical Officer for WEG, facilitated the discussion and encouraged the audience to ask questions. The panel began by speaking about their own personal experience and takeaway from WEG.

Will Coleman: “I would echo the sentiments of my teammates and coach that competing for your country is a tremendous honor and something we all take really seriously. We’re all a bit gutted in how it turned out. We know that we all had hoped for better. We’ll get back to work, put it behind us and try to get better in a couple years.”

Will Connell: “When you look at eventing globally, the reality is that the U.S. doesn’t sit immediately in the medal zone statistically as it is. We head to Tokyo with a very new format — three riders on a team, three scores to count. It’s going to be very hot, and a morning and evening competition. I personally believe that the teams that medal at Tokyo will be the teams who are ale to cope with those conditions, long days and the additional pressure of no drop score … With the right environment around the team and the right preparation, Tokyo will be a whole new game. These are talented and dedicated athletes.”

Phillip Dutton: “To represent your country is a great honor and something we all try to achieve and don’t take for granted. We had a great plan in place to bring our country back to the medal podium in Tryon. It didn’t quite work out. … I think we need to sharpen our pencil and get better. We really did appreciate the support of everybody and wanted to make it come off.”

Erik Duvander: “I came on board 10 months before the competition. We probably needed one more year with this team. … Everyone stepped up and tried their hardest. I think that is the key — the attitude of how everyone went about their business. That part of it I think was a good side of coming out of it. There was a lot of learning that took place — it’s high value that way. I hate to go to a championship and learn, but we will be looking forward to the next cycle and putting more things into place and getting more gelled as a team.”

“Long-term we are aiming for being the best nation in the world, but it takes time to build teams. There’s no magic to it. You have to get all the basics in the right place. I think the tipping point is when we get enough buy-in into the system.”

Lynn Symansky: “I tried my absolute hardest. It was so close to being a banner, amazing weekend for myself and my horse. We put in our personal best in dressage. That horse was destined to do that cross country course. In the final day, I think I was on a bit of a different horse having an extra day between cross country and show jumping, but we were all playing the same game. I did have an uncharacteristic three rails, which killed me. I hope you guys keep standing behind us.”

Sam Watson: “You have three phases and a lot can go wrong. It hit me hard at WEG in 2014 when (the Irish team) were in sixth place. I was going into the show jumping with about eight rails in hand. I came down to the third last fence, and the horse had a little look and he didn’t take off. I was holding on around his head. The one thing I didn’t factor in was if I fell off. I hung on, and we finished sixth, but that killed me, absolutely killed me because it was embarrassing. That was when I realized I had to take emotion out of it.”

Question: How is riding on a team different for you as a competitor?

Phillip Dutton: “There’s an added element to it when you’re on a team and you don’t want to let everybody down. You have to have faith in the work you’ve done leading up to it and your horse.”

Lynn Symansky: “At the end of the day, you have to make sure you trust what got you there in the beginning, which is yourself, but it’s a lot of extra pressure on your shoulders. … You’re trying to be as competitive as you can for yourself, but you also have the big picture for the team. You have to be willing to be flexible and adaptable.

“When I went to the Pan Ams back in 2011, it felt like a cheesy movie with Buck (Davidson) as a captain. That was five riders who finished on their dressage score, and I think that was because the group came together cohesively. It’s about knowing how you work and how the riders work. We all have the same common goal at the end of the day, which is to figure out how we are going to win.”

Sam Watson: “If there’s a difference between competing on a team and competing individually, then something has gone wrong. I would discuss with our team when I’m at an individual competition whether to take this route or that route. Our minds are open all the time to information. Different teammates are different. Some aren’t as open-minded. You have to learn that at the one-day events too.”

Question: What do you look for in a teammate?

Will Coleman: “I think what we’re all looking for is someone who believes in the processes that allow us to perform at your best. Not everyone will approach a competition in the same way. Hopefully you believe in the people around and you and respect whatever they think allows them to be the best version of themselves.”

Phillip Dutton: “You have other people who rely on you to do your part. It is a change for most event riders to be on a team because it’s not a team sport until you get selected for a championships.”

Erik Duvander: “It’s just about being courteous and kind to each other. If you have that in place then you can focus on performance. You don’t have to get distracted with the noise of the other athletes.”

Lynn Symansky: “Having mutual respect and understanding. Everyone is different in what gets them in the right mindset and keeps them as competitive as possible. I want a teammate who has your back even when you have tried your hardest but things didn’t go to plan. Sometimes losing is the most valuable education in how to get better.”

Will Coleman: “The course was amazing. Mark’s work as a course designer recently is some of the best we’ve seen. A lot of people were quite down on the clock when they hit the hill. It was a testament to fitness in getting the time. You had no cushion. Seeing how horses coped with it was fascinating.”

Phillip Dutton: “I thought Mark did an extraordinary job making sure less experienced horses still had a safe day and then testing the best. The time was difficult to get. The terrain led a bit to that with the hill coming at the end. There was a lot to do in the beginning. I thought it didn’t walk big, but it was technical. I thought it was a thinking course. It probably caused a bit more trouble than I was thinking it might. I thought Mark had it about right.”

Lynn Symansky: “I was fortunate to not be that early in the going and also to be on a horse I know like the back of my hand. It went how I planned it to. I thought Mark did an amazing job. He took a piece of land that maybe wasn’t the easiest — sometimes it felt like you were in a tumble dryer.”