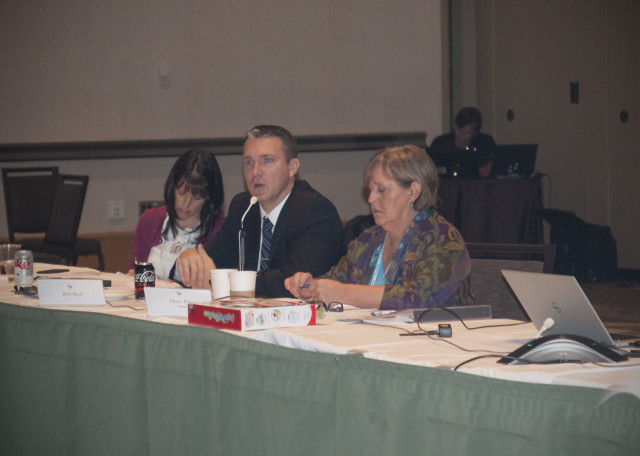 USEA CEO Rob Burk addresses the Board of Governors. Photo by Leslie Threlkeld.

Day three of the 2016 USEA Annual Meeting and Convention at the Diplomat Resort and Spa in Fort Lauderdale, Florida was jam packed with committee meetings, open forums and educational sessions all for the benefit of USEA members and U.S. eventing fans.

If you missed our review of today’s eye-opening High Performance Session featuring cross country training advice from Phillip Dutton, click here. Also, the USEA media staff is working tirelessly to bring as much information from the week’s meetings to its members as possible, so be sure to check out their convention coverage here.

USEA Board of Governors Meeting Recap

Murray Kessler, who will begin his role as the new USEF president in January, gave an enlightening presentation on how the USEF is completely revamping. “The fundamental difference going forward is a focus on building membership from the grassroots level on up by improving membership value,” Murray said.

Essentially, the USEF is getting a total overhaul, from a new vision and brand to a new website with educational tools and resources for members. It’s all part of a new strategic plan designed to grow equestrian sports in the U.S.

Part of that strategic plan is “a move for USEF beyond strictly enforcement.” With that in mind, USEF is ditching the “sherrif’s badge” logo and adopting a new logo.

The new website will be rolled out in January and includes a new learning center with educational videos like “How to Walk a Cross Country Course with Phillip Dutton.” More than 50 videos are currently in production, Murray said.

Joanie Morris, USEF Managing Director of Eventing, also gave an update on High Performance that mirrored yesterday’s session with the riders. Click here if you missed that report.

“It was an incredibly busy year for us, and we very much appreciate the fan base. Obviously we were really disappointed with our team result in Rio, and we are working on the evaluation of what happened and how to return the team to the podium. The good news is we did have a medal in every dicsipline at the Games, and we were one of only two countries to do that,” Joanie said.

“We also hosted the first Nations Cup in eventing outside Europe at Great Meadow. It seems like it’s getting more momentum and more excitement from other countries. Riders in other countries usually just think of Rolex, but now we’re getting more events on the world calendar that will hopefully have riders coming to us. We go to Europe a lot to compete, and it would be great if we could get riders to come here.”

Joanie confirmed that the 2017 High Performance plan for the U.S. Eventing Team is not yet complete and will continue to be worked on this week at the convention.

Sarah Broussard, USEA Vice President for Safety reported the excited news that an online test is now available for safety officers to obtain certification. Our own CEO Rob Burk took the test online and is now a certified approved safety officer.

Outgoing members of the Board of Governors were also honored with fun gifts, which you can see in the photo gallery below. 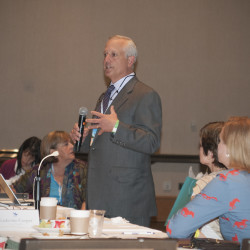 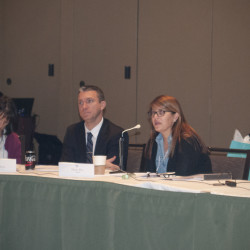 Joanie Morris, Managing Director of Eventing for the USEF, addresses the Board of Governors. Photo by Leslie Threlkeld. 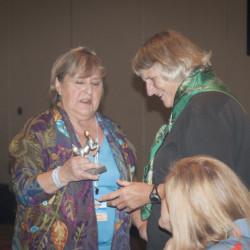 USEA President Diane Pitts presents outgoing Board member Phyllis Dawson with an award for her sense of humor and entertainment provided during the BOG Joke and Talent Night. Photo by Leslie Threlkeld. 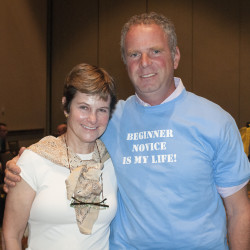 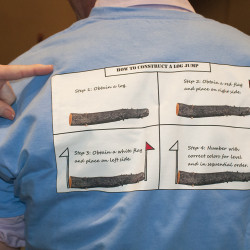 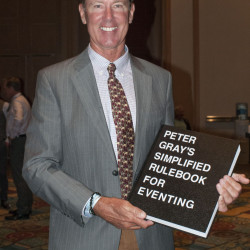 The USEA Classic Long Format Series was spotlighted today in several sessions including a meeting of the recently formed Classics Committee. The Classic Three-Day Open Forum was well attended by those interested in keeping the thrill of the ‘chase alive. Classics Committee Chair Gretchen Butts moderated with additional input from a panel of three-day organizers including Mary Fike, Lee Ann Zobbe, Chris Donovan and Leslie Threlkeld (yes, me).

The Classics Committee was formed earlier this year and they are dedicated to promoting and preserving the Classic Long-Format Series and upholding the mission of the USEA to “advance the sport of eventing through education of riders, trainers, officials and organizers, with the health and well-being of the horse of paramount importance.”

Some of the ways the Committee is doing this is by revising and clarifying the rules/guidelines for three-day events. They are also working to provide educational resources to benefit riders interested in competing in a long-format event and organizers interested in hosting one. Currently there are eight events in the country that offer the long format from the Beginner Novice through Preliminary levels.

“The three-day is a wonderful way to learn how to care for a horse and develop the best partnership with your horse,” Sharon said. “Any organizer putting on a classic wants you to be successful and to learn.”

Colleen said that conditioning for the long format gives you a good idea of how your horse handles being tired and teaches them how to work through it.

“Conditioning is a learned response. You can always condition them to be better than they are,” she said. “Horses have to learn how to work through being exhausted. Some horses, especially warmbloods, will hit bottom and act like they can’t go on. They have to learn how to find their second wind.”

On Saturday at 10:00 a.m., three-day organizer Cindy Deporter and Dr. Kim Keeton will teach a session on the Classic Three-Day Horse Inspection.

The organizers open forum is a place where organizers can discuss key issues affecting event organizers and get feedback from one another.

On topic that comes up time and again is managing late entries. Allison Springer said that making entries entries more expensive after the first week entries are open is a strong incentive for competitors to enter sooner. A member of Millbrook’s organizing committee said that while this may help the bottom line and helps the rider be aware of entering on time, it is not the perfect solution and doesn’t help everywhere.

Gretchen Butts of Waredaca said, “Historically it is a topic of every organizer’s forum and it is not a problem we have solved to date, nor is it an easy solution.” She suggested an Area-wide or national policy for managing late entries be it imposing a consistent late fee or what have you. Denis Glaccum, founder of Plantation Field Equestrian Events, said the marketplace must be determine how organizers manage late fees based on each event’s individual needs.

In response to a question about wait lists and incomplete entries, Denis said that technically by the rules, an entry cannot be accepted if it is incomplete, but realistically the organizer can let a competitor know what items are missing from their entry. “Managing wait lists is difficult but it’s a healthy situation,” he said.

Andrea Baxter of Twin Rivers shared a policy that works for them, which is to allow a 7-day grace period after the closing date to get a full refund minus an office fee. “As a rider I don’t want to enter ahead of time because I don’t want to lose my entry fee if the horse gets hurt, etc…We’re encouraging everyone that there is no penalty to cancel the week after the closing date, we just want them to get their entries in and process with a wait list that is fairly numbered and assigned.”

Some events are charging haul in fees for competitors who do not stable overnight and one attendee asked how that is justified. President-elect Carol Kozlowski said this came up in some of the town hall sessions around the country and made the suggestion to charge by vehicle and not by horse.

Two organizers agreed that their grounds fee is determined based on the costs of renting portable restrooms for the haul in area as well as providing water and cleaning up the space after the event. Another organizer said the fee would be more palatable if it were included in the entry. In response, Robert Kellerhouse from Galway Downs stated that they isolate costs as much as possible to benefit the people who don’t use all the services offered at their event.

Finally Robert Winter, USEA’s Director of Information Systems Management, spoke about the newly developed USEA Event Companion App, which is a mobile application “created to quickly provide important information that you need while you plan, prepare and participate at a USEA competition.” He stressed that this app is a tool for organizers to use, to communicate with their competitors or anyone on grounds at their event. Ideally, organizers will be able to control it on their time utilizing push notifications. The app is not a required tool for organizers, but a service–a platform to benefit their event and provide information to their event participants.

At the end of the session, organizers were given a survey of questions that arose during town hall sessions around the country over the last year. Organizers were encouraged to fill them out completely and return to the USEA.