The 2021 USEA Annual Meeting and Convention wrapped up a weekend full of information and learning in Albuquerque, New Mexico yesterday, welcoming a few hundred members as well as panelists and professional riders from all over the country.

I attended several sessions on Saturday, my notes from which you can find below. This was my first time attending Convention, believe it or not, and I definitely plan to make the trip a recurring date on my calendar as I really enjoyed the variety of seminars to attend as well as the opportunity to meet and talk with other USEA members throughout the weekend. Many of the sessions were livestreamed, but replays have not yet been made available — we’ll update this article if and when they are.

The USEA Safety Committee is comprised of three sub-committees or task forces dedicated to the following categories: Horse, Rider and Cross Country Safety. Cross country safety lead Jon Holling noted that the Frangible Fence Fund raised $500,000 in its first year and has aided the addition of 375 new frangible fences at 130 facilities around the country. Fundraising is ongoing in 2021 and has raised $200,000 so far.

“We try to look at the sport as a whole, specifically on cross country,” Jon said of the committee’s work in 2021. “We try to see the issues on the horizon and catch them before they come up. Whenever there is an accident, we look at it and see if there are ways to minimize risk, then give recommendations to the USEA.”

Dr. Jennifer Miller DVM, who heads up the Horse Safety sub-committee, noted some interest in further research such as an epidemiology study using Equiratings data as well as potentially working with heart monitors for continued benefits. Sarah Broussard, representing the Rider Safety sub-committee, said that the members were always looking for updated technology and ways to make our sport safer using these new ideas.

USEA CEO Rob Burk provided a few numbers on safety, noting that the cross country elimination rate for 2021 was down by 8% and the rider fall rate had decreased by 5%. The Mandatory Retirement (horse fall) rate was .22% in 2021, slightly up from a 2017-2019 average of .16% (2020 numbers were not used for comparison due to the variables that affected numbers). The highest Mandatory Retirement rate came at Kentucky this year and the highest number of rider falls also was seen at the 5* level.

Several members asked questions regarding the use of old, outdated equipment, disseminating information and reports following catastrophic accidents, and safety during schooling. Rob Burk noted that the USEA has begun to track schooling incidents, explaining that “a lot of our focus has been on the training and education aspect,” and that those interested in building cross country fences should be better educated on how a fence is read by a horse. David O’Connor, from the audience, also mentioned that the Cross-Country Course Design Guidelines was full of useful information that anyone can access.

Burk also conceded that lack of reporting and the resulting speculation can be more damaging than not. “We need to do a better job of communicating the investigation,” he said, also noting that the organization wanted to avoid giving out personal information or “victim-blaming”. “We’ve looked at the aviation industry and how they report out accidents and I think we can improve on what we’ve done.” He also noted that the USEA is not the keeper of accident records at competitions and that this was something that would need to be worked on in conjunction with the USEF. 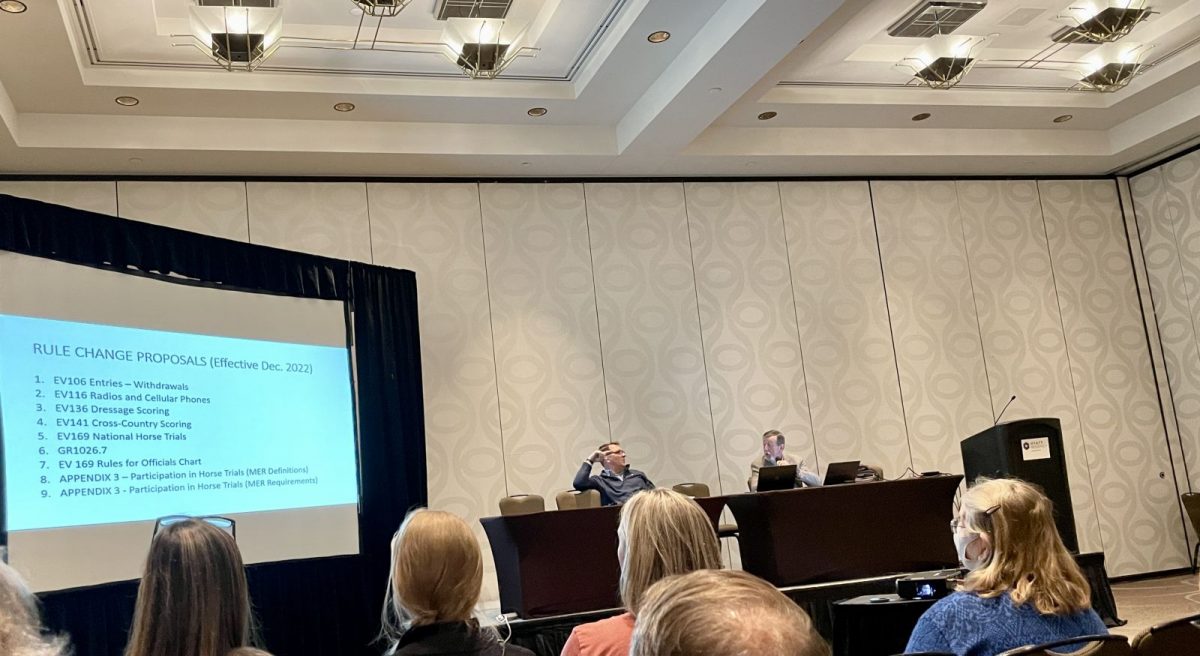 Malcolm Hook and Jonathan Elliott sat in to chair the Rule Change Committee’s open forum session, always a popular stop for members to get the latest updates on forthcoming proposed rule changes. The latest batch of rule changes has yet to be discussed and approved by the USEF and will be open for two different comment periods for members.

You can read the full report from this session, including descriptions of the proposed changes that would, if approved, take effect in December 2022, here.

Much discussion centered around the proposed Appendix 3 addition, changing the numbers of MERs required to move up. This proposed change caused much scuffle earlier this year and was subsequently sent to a new task force for further review after members voiced concerns about the number of required runs at Training level (changing from four to six with this proposed change) before moving up to Preliminary.

“Appendix 3 deals with people that haven’t been established at a level and what’s required of them to move between the levels,” Jonathan Elliott said. “It was ultimately tabled and a task force was formed to evaluate the proposal and retool it.”

At least one representative from each Area was on this task force, which tried to take the concerns of stakeholders into account. The result was a change to the proposal that extended the MER window from 24 months to four years.

“We looked at a lot of statistics as we went and there was a lot of debate back and forth,” Malcolm Hook “And ultimately…the riders and horses that have done (at least six MERs) are half as likely to fall as those that had less than six. Therefore, it just seemed smart that it was a logical break even point o do that.” The committee also noted that about 85% of the riders moving from Training to Preliminary are already doing an average of six events at Training before moving up.

Questions still swirled around the conclusion of six events to qualify, and the moderators reminded members that the next open comment period for these proposals will be from December 15 through January 17. You can add your comments to these proposals using your user portal on the USEA website. There will also be another comment period via the USEF in March. 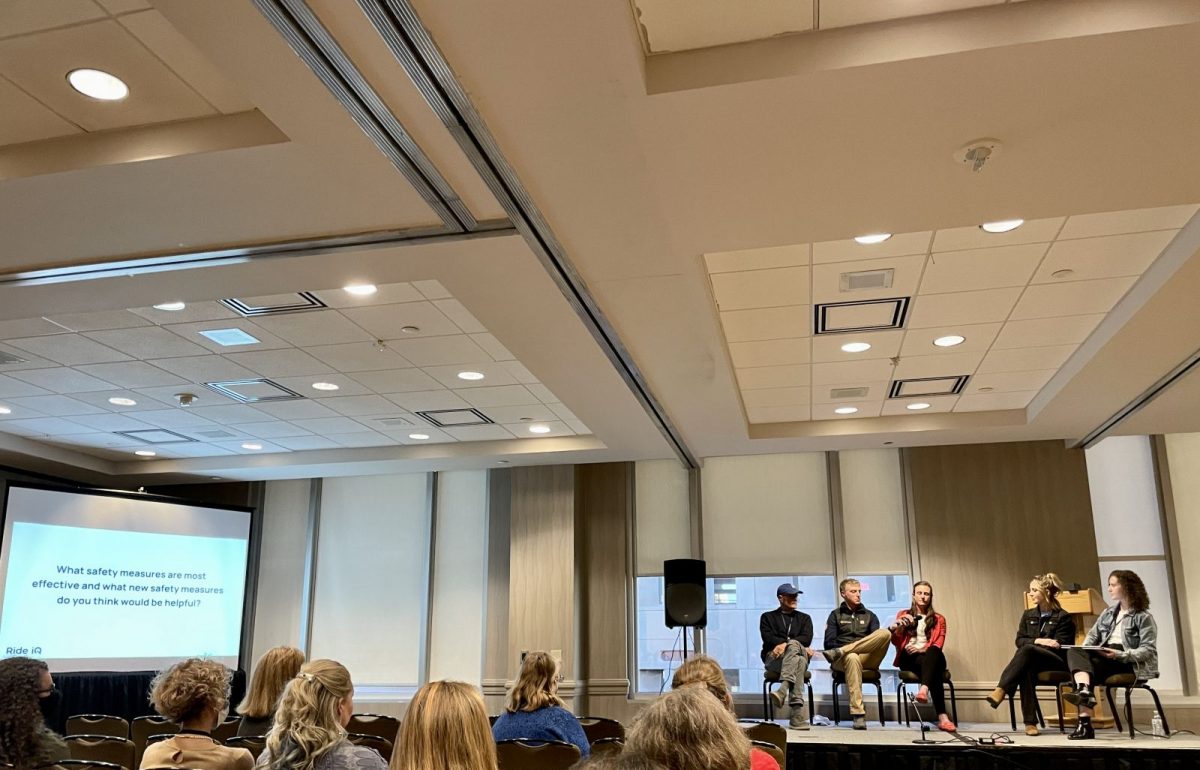 Helmed up Ride IQ co-founders McKinsey and Jessa Lux and accompanied by a panel of Kyle Carter, Lauren Nicholson and Doug Payne, the Eventing is Evolving panel featured a Q&A session about the future of the sport.

The session began with a video comparison of eventing in the 70s versus eventing today. Kyle Carter pointed out that as much as some like to wax poetic about the “good old days” of the long format, the courses still showed much less flow than we tend to remember. “The riding has developed to be much smoother,” he explained. “Our former professionals had fewer horses and fewer opportunities to train and get better.”

Moving away from the former long format, all the riders agreed, has lent itself to longer careers and fewer injuries. “Welfare is the biggest improvement over time,” Doug commented. “On a per start basis, we’re far safer now.”

Discussion centered on the implementation of frangible pins, including MIM clips that are designed to break on corner fences and hung rails. The riders all agreed that seeing a pin fall — even if that pin costs a medal as it potentially did in Tokyo for Michael Jung — was better than seeing a horse fall. “Yes, it changes the competition a little bit,” Kyle Carter said. “And if a great horse and a great rider has a pin that costs them a medal, I can live with that and I can live with there being a little more of that. We can’t expect the world to stomach what can happen with a horse fall or a horse injury.”

Lauren Nicholson was a vocal advocate of promoting a higher standard of riding when it comes to safety. “I think the standard of riding needs to keep being raised,” she explained. “You can create as many safety measures as you want, but we have to keep expecting more from the riding and the quality of riding.”

Lauren also noted the “move up mentality” that’s prevalent within our sport, encouraging riders to instead challenge themselves to become more than just proficient at a level. “Everyone has to make the challenge about ‘how well can I do this level and how well can I make that the standard before I move up?’ And trainers have to be able to tell their students they aren’t ready to move up. A lot of people hear what they don’t like and they can always find a trainer that will let them move up.”

“We don’t want people to think they have to move up all the time,” Lauren continued during a part of the discussion that centered around the biggest risks for longevity of the sport. “We need to give everyone goals to attain at the levels they’re comfortable.” She referenced the Grassroots Championship at Badminton as a creative way of keeping people involved and interested in other levels.

I’m going to drop in some links to coverage from the USEA from other sessions, including the Board of Governors meeting and Annual Meeting of Members. Be sure to stop by the USEA website for full coverage from Convention week.