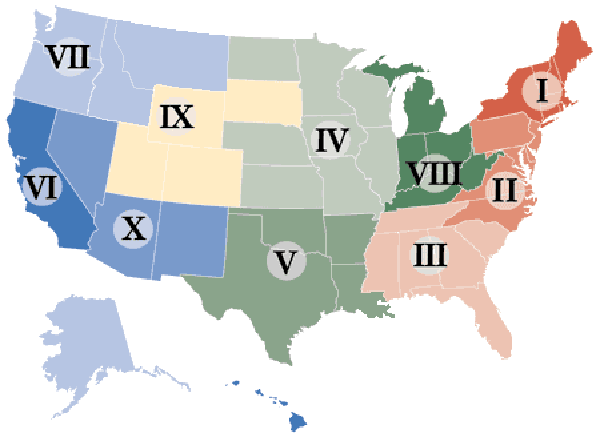 Three area borders have been redrawn along state lines after an amendment to the USEA’s bylaws was approved at the Annual Meeting in Fort Worth, Texas, earlier this month. That puts Pennsylvania in Area II, Louisiana in Area V, and Idaho and Montana in Area VII.

This change has been in the works for quite some time, though this is the first many members are hearing of it. It was originally brought to the table in 2011 when Brian Sabo recommended that the Area Affairs Committee investigate the existing area boundaries, USEA President Diane Pitts said.

At the time — and until this new amendment passed earlier this month — all area borders already followed state lines with four exceptions: western Pennsylvania in Area VIII, southeastern Louisiana in Area III, and northern Idaho and northwestern Montana in Area VII.

Why Change the Borders?

After a two-year exploration process led by Lou Leslie, Vice President of Area Affairs, the USEA found that certain parts of the country struggled to have representation on a national level, particularly these pockets of areas divided by state lines, Diane said.

“With states that are split across two different areas, the smaller membership population portion has traditionally lacked involvement with the Area Council or national representative,” Diane said. As a result, the Area Affairs Committee decided to move forward with realigning all area borders along state lines, with the idea being to give these pockets a voice at the national level.

“The decision was made that instead of chasing the ever-changing active rider patterns of membership along geographical boundaries, area boundaries would follow state lines,” Diane said. “By doing so, areas are now complete states on the councils, and they can hopefully avoid having population pockets that were not well represented.”

But not everyone is happy about the new area borders, particularly members in Ohio and western Pennsylvania, which were previously together in Area VIII and have now been divided by this new amendment. These members have certainly found their voice now, taking to social media this week to speak out against the change.

Jackie Smith of Stone Gate Farm in Hanoverton, Ohio, and other affected members have appealed to the USEA to allow western Pennsylvania to remain in Area VIII for the sake of keeping these two events.

“Area VIII is already losing Greater Dayton and Hunter’s Run this year; we can’t afford to lose two more events in Area VIII,” Jackie said. “We need to fight for an event that has been running for 40 years and has been a part of Area VIII from the very beginning.”

Western Pennsylvania presents a unique challenge to the concept of drawing all area borders along state lines, as the Appalachian Mountains and Pennsylvania Turnpike serve as both physical and logistical barriers to eventers living in this part of the state.

As a result of high turnpike tolls and the cumbersome haul over the mountains, the vast majority of eventers living in western Pennsylvania primarily compete in Area VIII, which is much easier for these members to get to than traveling to the eastern part of the state for Area II events.

“When Area VIII was (originally) formed, western Pennsylvania was determined to go with the new Area VIII because that’s where the competitor base was,” Jackie said. “Nothing has changed. Yes, we do go to Area II to compete, but rarely do Area II competitors come to Erie to compete.”

Jackie and other Area VIII members, as well as those members in western Pennsylvania that suddenly find themselves a part of Area II, are frustrated that they didn’t know about this area realignment until it was too late.

Proof is in the Proxy

The Area Affairs Committee, which is made up of the Area Chairs from each of the 10 areas, as well representatives of the Adult Rider Program and the Young Rider Program in each area, has discussed the issue for two years, Lou said, with each Area Chair tasked with exploring the idea of realignment with their respective members.

Additionally, the amendment was included in the 2014 USEA Proxy Form, which was emailed to all USEA members on Oct. 10 and 31, 2014, with a reminder to vote emailed on Nov. 5, 2014. The proxy was also posted in the membership section of the Online Services homepage on the USEA website (you can still see it there).

The proxy is used to collect votes from members who cannot physically be present at the Annual Meeting during the live vote on amendments to the bylaws. You can view the proxy by logging into your USEA account and clicking this link; it’s listed as the third article under the amendments section:

Next Steps for Area VIII

The amendment was approved by the general USEA membership through the proxy vote and during the live vote taken by members present at the annual meeting in Texas, which followed Leslie Law’s keynote address, on Saturday, Dec. 6, 2014.

“It is clear now that in this process, communication with some of the members might not have been effective. We also assumed that members would review the proxies sent prior to the Annual Meeting,” Diane said.

“Had we heard the concerns being expressed by the members from western Pennsylvania before the vote was taken, we clearly would have taken into account their concerns. We learn new lessons every day and the latest one is that we need not to assume that the proxies will be read and that we need to publicize more clearly what the vote is about when soliciting proxies.”

Area VIII Chair Cathy Wieschhoff is now working with the rest of the Area VIII Council to see what can be done to help members in western Pennsylvania stay in Area VIII; the issue will be re-visited at the next Area VIII Council meeting, Cathy confirmed.

What do you think about the new area borders, EN? Should western Pennsylvania be allowed to stay in Area VIII? Vote in the poll below and weigh in with your thoughts in the comments.