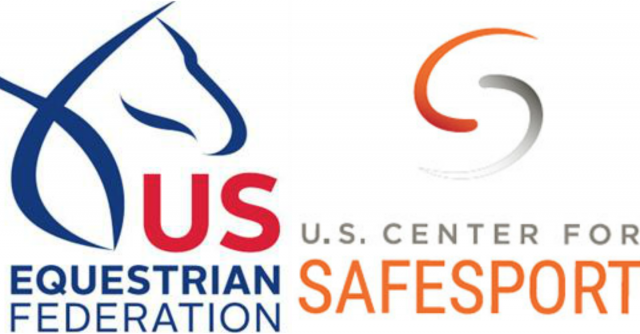 Logos via US Equestrian and U.S. Center for Safe Sport.

The Bill went to the President’s desk after passing the House and Senate in late January. It was signed into law on Feb. 14 and is effective immediately.

An explanation of the law via the US Equestrian Communications Department:

Senate Bill 534, Protecting Young Victims from Sexual Abuse and Safe Sport Authorization Act of 2017 has been signed into law, becoming effective immediately. The bill imposes a duty on amateur sports organizations, including US Equestrian and its members, to report suspected sex-abuse to local or federal law enforcement or to a child-welfare agency designated by the Justice Department, within 24 hours. Failure to report is subject to criminal penalties.

The bill amends two federal statutes: the Victims of Child Abuse Act of 1990 and the Ted Stevens Olympic and Amateur Sports Act of 1978.

Within the Victims of Child Abuse Act of 1990, the bill extends the mandatory duty to report to US Equestrian members and participants, who must report suspected sexual abuse to authorities within 24 hours. An individual who does not report the suspected sexual abuse is subject to criminal penalties. Additionally, the bill extends the statute of limitations for victims to bring a civil lawsuit against a perpetrator and allows a claim for punitive damages.

The bill also amends the Amateur Sports Act of 1978 in several ways. Firstly, it designates the U.S. Center for SafeSport to serve as the independent national safe sport organization. This designation includes the responsibility for developing policies and procedures to prevent emotional, physical, and sexual abuse of amateur athletes. The bill also modifies the obligations of amateur athletic organizations, including National Governing Bodies (NGBs) such as US Equestrian.

These organizations must abide by all policies and procedures to prevent any type of abuse. They also must comply with all reporting requirements, establish reasonable procedures to limit one-on-one interactions between athletes who are minors and an adult, offer and provide consistent training to members who are in contact with minors, as well as establish ways to prohibit retaliation against the victim.

“US Equestrian, as the NGB of equestrian sport, puts the safety and welfare of our members and horses first,” says US Equestrian President Murray Kessler. “The safety of our children is of utmost importance and US Equestrian supports the passage of this bill and sees it as an important step towards making our sport safe and enjoyable for all. We have taken many necessary steps to educate our members on the importance of the Safe Sport, but the work has only begun. We value our partnership with the U.S. Center for SafeSport and look forward to connecting our members to the resources that it has to offer.”

[Safe Sport – Keeping Our Sport Safe for All]