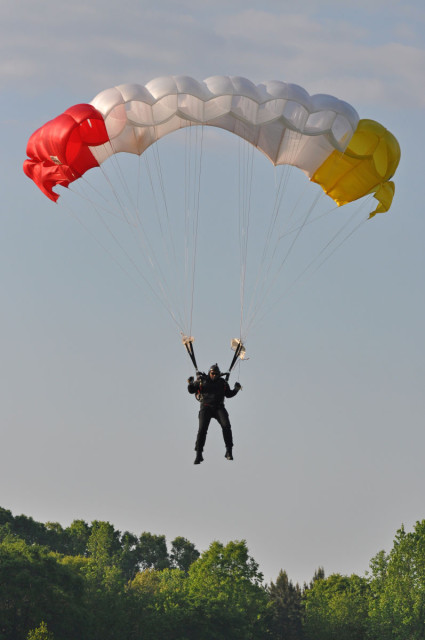 Mike Elliott, founder and president of the All Veterans Group, comes in for landing at Southern 8ths Farm. Photo by Leslie Threlkeld

During the week between the Rolex and Badminton CCI4* events, where history is made and lifelong dreams are realized, 34 Beginner Novice through Training level competitors reached their own milestones competing in a long-format three-day event at the Heart of the Carolinas Three-Day in Chesterfield, South Carolina.

Brad Turley is the owner of Southern Eighths Farm, the location of the event affectionately known as “Brad-minton.” The nickname comes with good reason, as Brad goes above and beyond to provide an excellent competition for eventers who appreciate and dream of riding at a traditional three-day.

Heart of the Carolinas is the only competition in the country that offers a Beginner Novice Three-Day sanctioned by the USEA in addition to Novice and Training Three-Days. And while it also hosts a regular horse trial for Beginner Novice through Training, the theme of the week is fun, fellowship and learning.

In its fifth year, educational seminars, demos, and practice runs on steeplechase were highlights of the experience. However, Brad is always looking to take it up a notch, so he called in the troops. Literally. 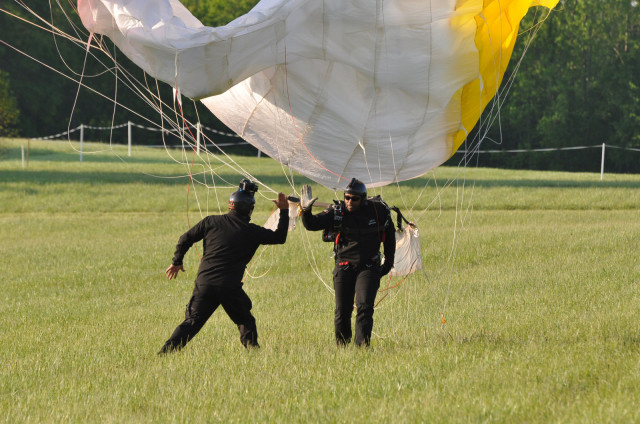 The All Veteran Group Drops In to Volunteer

The All Veteran Group is comprised of active and retired military and patriotic Americans who honor and pay tribute to veterans through community outreach and demonstrations. Mike Elliott, the founder and president of the All Veteran Group parachute team, is a friend of Brad’s.

While Gammon Castellvi, the volunteer coordinator at Heart of the Carolinas, did an incredible job organizing 100 volunteers for endurance day, every bit of manpower helps. When Brad called Mike, he asked if he and the boys could “jump in” and help out jump judging.

At 0800 hours the morning of May 2nd, five members of the All Veteran Group parachute team jumped out of a perfectly good airplane and landed on the steeplechase practice field at Southern Eighths. They spent the day helping out and learning about the sport of eventing, which we all know has its roots in the cavalry.

“I’ve seen them jump before, but when they came down on our property here, it was impressive,” Brad said. “These guys are just a bunch of great guys and a bunch of warriors that are helping other people.” 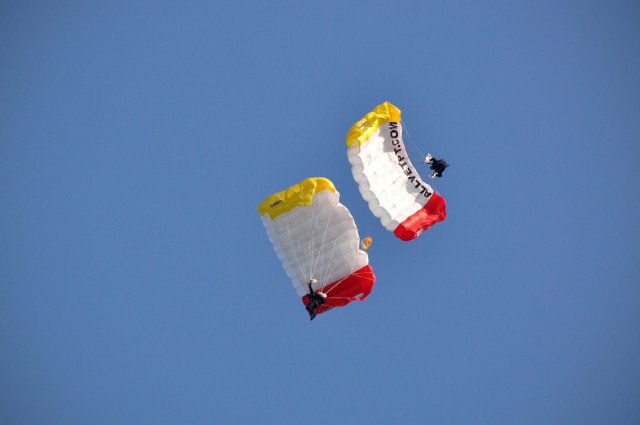 The All Veteran Group is a highly skilled group of individuals passionate about falling out of airplanes. Photo by Leslie Threlkeld

Mike served 26 years in the military and was a member of the Golden Knights U.S. Army Parachute Team. The All Veteran Group is a way for him and other veterans to continue to serve, give back and stay connected with the community.

“Being a jump judge here and watching the horse come up to a jump with the rider and seeing the communication and seeing the passion and determination in the rider’s face, it’s the same passion,” Mike said.

“They say find something you love to do and do what you love. We jump out of airplanes, they jump obstacles. It’s that same passion.”

Besides performing exciting demos at sporting events, the All Veteran Group gives back to the community by organizing programs like Hometown Heroes and Support Combat Injured Troops. Their major campaign this year is raising awareness of the high rate of suicide amongst veterans.

Charles “Big C” Cooley recently retired after 25 years of service and was a member of the Golden Knights along with Mike. “Everybody we’ve ever jumped has come back and told us the story of how that jump made a difference,” he said.

“We’re letting soldiers that were at the tip of the spear go do something a lot of able bodies can’t do: conquer their fear like they did as soldiers on a daily basis.” 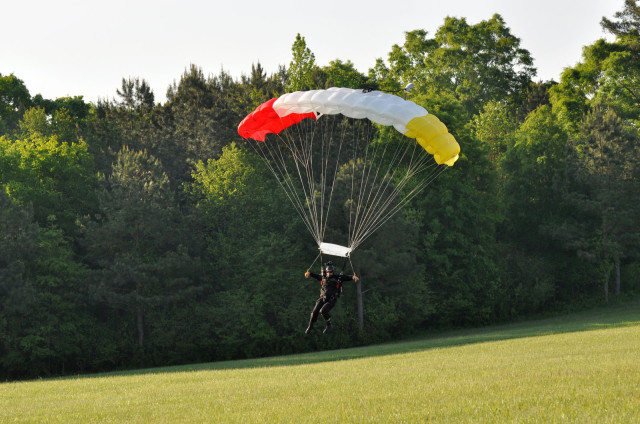 Photographer/videographer Timothy Wood lands first so he can film the other members of the All Veteran Group dropping in. Photo by Leslie Threlkeld

The group serves military family members as well. Through a program called Leap of Faith, they help individuals who have lost a son, daughter, husband or wife work through their grief.

Writing down their feelings on a piece of paper, family members jump out of an airplane with a veteran and free fall for 35 seconds. When the parachute opens, they take out their handwritten note and the wind carries it away.

“You’re falling at 120 miles an hour. Now this parachute opens up and it’s so quiet and euphoric,” Mike said. “They reach in and find that thing they can’t deal with and they let it go. Once they’re on the ground they’re different. They’re different people.”

The link between three-day eventing and the military is not lost of the veterans who volunteered at the Heart of the Carolinas.

“We appreciate events that carry on tradition,” said Charles, who cheered on each and every rider who rode past him on the steeplechase track. “Horse riding started as a military style. This gives us the opportunity as vets to come in and be part of that history. It’s just phenomenal.”

Mike promises they’ll be back next year, not just to help out his friend, Brad, but to support the riders who have invested time and effort into their passion, just like Mike and the other members of the All Veteran Group. 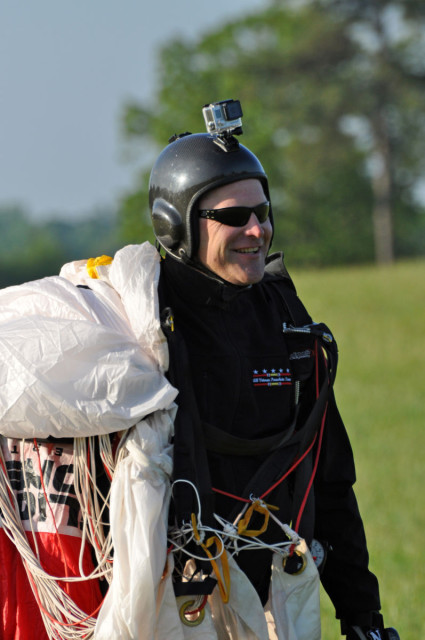 “Magical is the best word I can think of. You don’t get a chance to get out in such isolated areas as beautiful as this property,” said Timothy Wood, a photographer and videographer for the parachute team.

“The friendship and camaraderie I feel here, the sharing from everyone, it’s good for us. To see people so passionate about what they do here, we can relate to it so much.”

It was an honor for the officials and competitors at Southern 8ths to have the All Veteran Group parachute team spend the day with them and to arrive is such an exciting fashion!

“It was a good day,” Brad said. “I’ve very happy and proud that I can call them my friends.”

Please visit the All Veteran Group website and find them on Facebook to learn more about their mission.

Timothy Wood is a patriot for the parachute team and supports them as a videographer and photographer. With over 5,000 jumps in his career, 4,900 of them have been camera jumps. Enjoy this video, captured and edited by Timothy, of the All Veterans Group parachuting in to Southern 8ths Farm on Endurance Day.