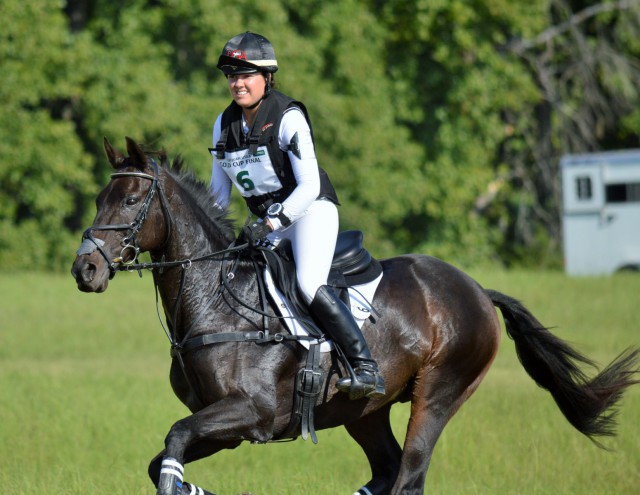 Leslie Law maintained his lead aboard Beatrice Rey-Herme’s Tout de Suite in the CIC3* at Chattahoochee Hills this afternoon, picking up the win on a final score of 57.0 with 14 time penalties added. “Colby” really stepped up to the plate this weekend, and while Leslie will likely still continue to work to improve (as we all know, event horses are always a work in progress!), he will be pleased with the horse’s efforts.

After that, the leaderboard shook up quite a bit after Ellie MacPhail and RF Eloquence picked up 20 jumping penalties on course, dropping them down to fifth overall. Lying in third after show jumping, Jacob Fletcher and Atlantic Domino also ran into some trouble, ending their weekend with 40 penalties added to their final score. 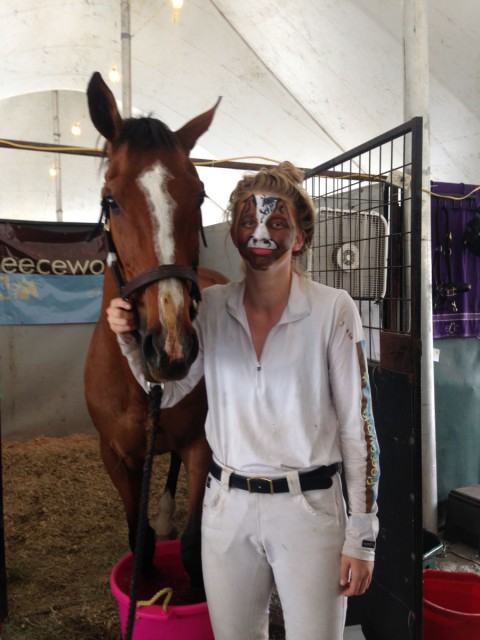 Avery Klunick had her face painted to match her horse. Love? Photo by Libby Head.

The door was then opened for others to step up, and Avery Klunick and In It to Win It did just that. This pair moved up from fourth to take over second place, picking up 20 time penalties on course. We had to share the photo Libby sent us this afternoon — evidently face painting is available at Chatt Hills this weekend, and Avery decided she’d like to match her horse. That’s love, Avery. That’s love.

Just one pair came home clear inside the time: Nilson Moreira da Silva and Magnum’s Martini. This was Magnum Martini’s debut at this level, and the 11-year-old Holsteiner gelding owned by L and N Equestrian certainly made a statement today, moving from ninth to finish with a yellow ribbon for his efforts.

Abby Hamblin and Silver Flash also made some moves, scooting up the board from eighth to finish in fourth with another clear round with time. This pair has successfully made the step up to Advanced in 2015, and this is also their debut at the CIC3* level.

We also must give a shout-out to Jon Holling, who made his return to competition after breaking his leg earlier this spring. He piloted Proper Timing around clear with time to finish sixth today. Not to mention, Jon also threw his leg over three other horses this weekend, completing them all and taking home the win in the Prelim with Downtown Harrison. Welcome back, Jon! 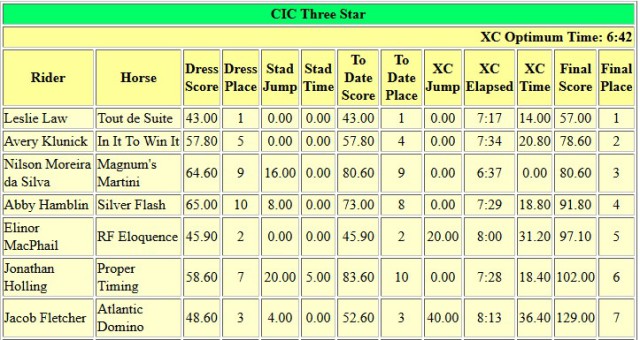 In the Advanced, it was another day at the office for Libby Head, who will be packing her bags for Luhmühlen with an even bigger wave of confidence to ride. She told us yesterday she didn’t plan to put the pedal to the metal; she was able to cruise around with 22 time penalties for her final confidence and fitness run before she and Sir Rockstar head to Europe.

Unfortunately, Julie Norman and Consensus had a spot of trouble on course, picking up a 20 which drops them into fourth for the weekend. All is well, though, as Julie reported on Facebook that “Thomas” felt very keen today. Julie said she missed her line to a combination and had to re-approach — she’s got a happy, healthy horse back in the barn with her tonight, so they’ll regroup and get back at it next time.

Elisa Wallace and Corteo recorded the fastest time of the division, picking up 14 time to move up from fourth into second overall on a final score of 60.7. Elisa and Corteo’s owner, Rose Spillane, will be thrilled with their weekend in the gelding’s first run at the Advanced level.

Zach Brandt and Cavallino Cocktail will take third place home with them, finishing on a 63.7 with 24.4 time added today.

Both the CIC3* and Advanced divisions this weekend were qualifiers for the Adequan USEA Gold Cup Final, which will be held at AECs in September. All riders in these two divisions who completed on a number with no more than 20 cross country jumping penalties are now qualified for the Final, if they were not already. We hope to see as many of them as possible in Texas this fall!