The CIC2* Senior European Championships for amateur riders took place in Tongeren, Belgium last month July 27-30. The contest offers amateur eventers the chance to earn their ‘flag’ and represent their country, and for many, is a great riding education ahead of Nations Cup events, or other international competitions. For Victoria Leabeater, it offered invaluable team experience. 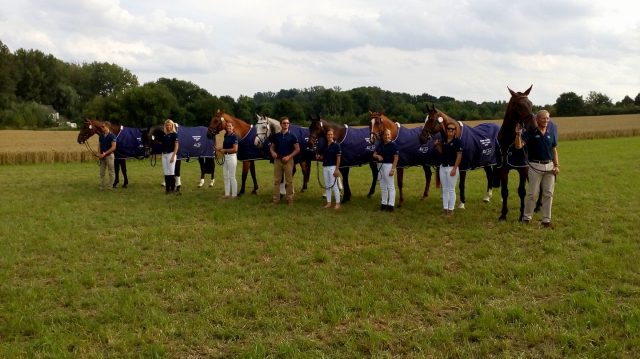 Team GB in their sponsor’s rugs from the Mark Todd Collection. Team GB was also sponsored by Owl Financial. Photo by Peter Buist.

Victoria was part of Great Britain’s silver medal-winning team with her own Dolces E. She rode alongside compatriots Simon Ashworth, Jack Pinkey, Nicky Hill, Steve Garrod, Sharon Polding, Lauren Mclusky and Indiana Limpus, who earned individual bronze. Chef d’Equipe Peter Buist said he was very proud of Victoria and the other British riders, especially how they conducted themselves on their first international duties.

“Cross country day was just amazing – the course was challenging and we knew the time would be tight. Only three riders managed the time, and they were all Brits. Our performance on the cross country pulled us up to second place in the team classification, and we held onto that in the show jumping,” he said. 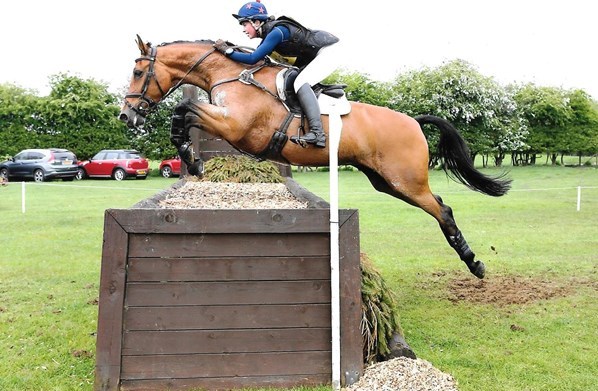 The Championships are unique as they include a tricky ‘team dressage’ test, where all six team members complete a dressage test simultaneously in the arena, before each undertaking an individual test. This is then followed by the cross country and final show jumping phase.

“The team dressage is a little confusing!” acknowledged Victoria Leabeater. “You’re essentially following each other around the arena. In the UK at least, many of us did something similar as children in our riding lessons, called musical rides – it is much like this. You line up for the halts, although we did lateral work, medium trot, canter and rein back all together. For the diagonal movements, the judge sees one at a time – there’s lots of concentration required, and it is marked as a collective.”

Like in a traditional horse trial, dressage is then followed by the cross country and show jumping phases. Victoria and “Dolces” were going great-guns in the early part of the cross country, but the two met disaster at the trakhaner fence, around a third of the way around.

“She was jumping so well – up until this fence, it was a class round – the mare is a great jumper and jumps for fun,” Victoria rued. “It was all feeling good, and although the time was tight, thought I thought we’d make it. Dolces took off, then put her feet over into the ditch – it was such a shame, as she’d been good all week,” remembers 20-year-old Victoria.

“She went to take off, but she was confused as the ground was the same color in the ditch as the take off point. We were lucky really, as she just needed some stitches in front, from a stud injury. I was completely devastated at the time as we had to retire, but we did place in silver position as a team, and I am thrilled that my contribution in the dressage stood us in such good stead for a medal. I would have loved to have been on my horse for the presentations, but that’s life,” she muses. 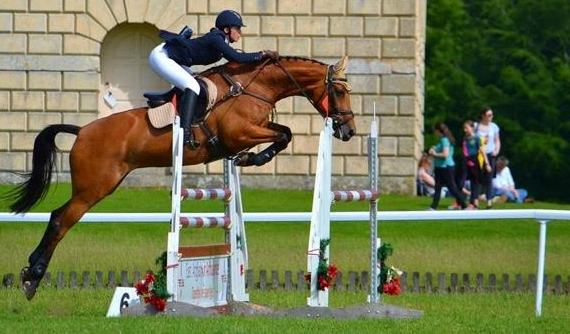 Victoria is currently a student, studying for a Bachelor of Science degree in Equestrian Sports Science at Hartpury College. 14-year-old Dolces, who Victoria has owned for three years, stays at the campus.

While her schedule is tight with studies, Victoria focuses her riding on Dolces, while her other horse, Vincent, stays with a friend where a dressage rider trains him in her absence. “He’s 16, and has done a two-star, but he was never going to be a team event horse – he’s brilliant though and a very sweet boy,” Victoria said of the 15-year-old New Zealand Warmblood.

Victoria and Dolces have enjoyed some promising results in 2017, including fourth at Nunney International in the Open Intermediate, fifth in the Intermediate at Aston-Le-Walls, and second in the Intermediate at Tweseldown. When the pair first stepped up to two-star, Victoria says the fence height was not a problem. “The challenge when you move up a level is really about the technicality, at least it was for us. For example, the speed of reading the fences for both horse and rider. With Vincent, I am super-confident in his ability to read fences. He’s very talented, but does not have the natural scope of Dolces. With the mare, it is getting enough experience under your belt to be able to tackle the level of technicality at two-star,” she says. 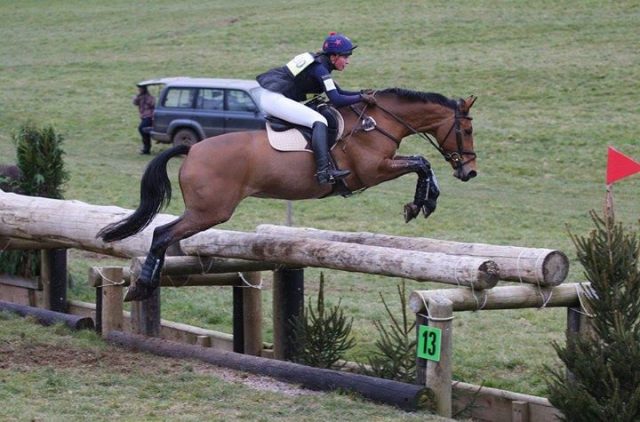 Victoria is currently studying for a Bachelor of Science degree in Equestrian Sports Science. Photo by Hartpury College.

Victoria hopes to contest a CIC3* in 2018, and, depending on Dolces’ recovery, some Intermediates or Advanced events for the remainder of the eventing season in the UK. She also has eyes for more team experience. “I came up through youth eventing programmes and we have a great structure here to take people up the levels,” she explains. The British eventing teams are supported by the British Equestrian Federation’s World Class Programme, funded by ‘UK Sport’ through the National Lottery; the Nations Cup team is funded and supported by World Class. “The Nations Cups programme in the UK gives more people a chance to ride and experience the team environment,” she adds. 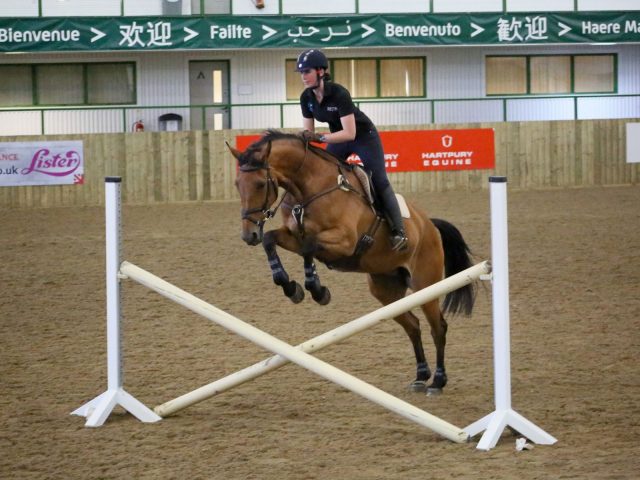 Victoria Leabeater is a member of the Hartpury Equine Academy, an elite student club that offers coaching and support. Photo by Hartpury College.

Of her experience in Belgium, Victoria says she’s gained a lot, and very much enjoyed being part of the British team. “There have been so many great people that have helped me to get there, such as Lizzel Winter, Hartpury’s Equine Academy Director, and trainer Corrine Bracken. I earned my [national] flag there, and took part in the dressage phase, which contributed to the overall marks – it was great fun, and a lovely experience,” she concludes.

We wish her all the best; and for Dolces, a speedy recovery!