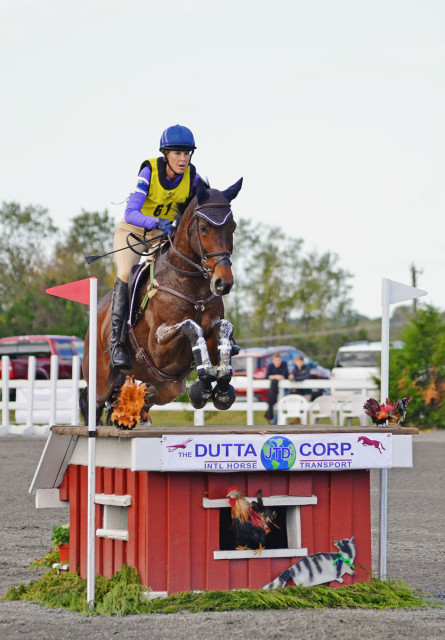 It was a good day to be sitting on a Thoroughbred, with Victoria Jessop and Desert Mystery jumping one of 15 double clear rounds to take the Dutta Corp Fair Hill International CCI2* lead on 41.3. Victoria and “Dez,” an 11-year-old OTTB gelding (Mojave Moon X Maternity Leave, by Northern Baby) she owns, have been partnered together since 2007 since the horse came off the track, working their way through the levels together.

Victoria and Dez were third at the Jersey Fresh CCI2* in the spring and won the Richland Park CIC2*, setting them up for a go at Fair Hill this weekend. We profiled their road to Fair Hill last month in this post, so you can read more about them while waiting to hear more about their day in this afternoon’s press conference, which will be held after cross country.

Julie Richards and Urlanmore Beauty, an 11-year-old Irish Sport Horse gelding owned by Asa Cooper, moved up from a tie for fourth to take second place on 43.0 after jumping double clear. This horse only just moved up to the Intermediate level in July, doing his first CIC2* at Chatt Hills in August to qualify for Fair Hill, making their performance today all the more impressive. 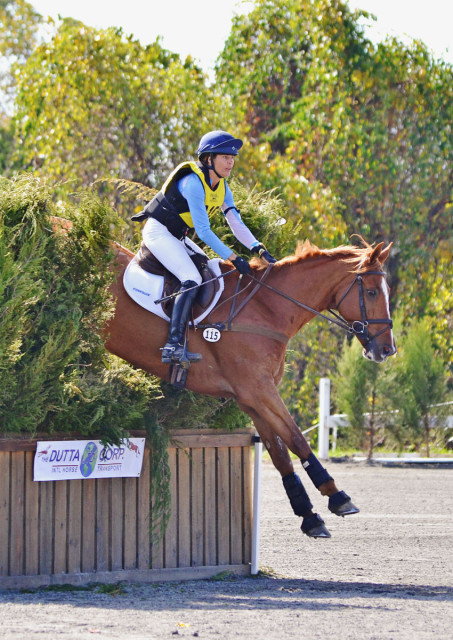 Kim Severson and Cooley Cross Border moved up from sixth to third with a double clear to sit on 43.6. This clear has to be especially sweet for Kim, as Cross, a 7-year-old Irish Sport Horse gelding owned by The Cross Syndicate, have had a few blips on cross country at the two-star level this season. But the horse looked locked on today — redemption is sweet!

Tamie Smith and Twizted Syster put in a textbook double clear to move from ninth to fourth place on 44.7. As “Chloe,” an 8-year-old Irish Sport Horse mare owned by the Twizted Systers Syndicate, has mostly competed in Texas and California, Tamie said she wasn’t sure how the mare would handle the hills. But the terrain didn’t seem to bother her at all today as she ate up the track.

Boyd Martin and SBF Cortez moved up from seventh to fifth place with a clear trip and 2.4 penalties to sit on a score of 46.2, a very solid performance for the horse’s first attempt at the CCI2* level. Boyd still has four more riders to come today, as he’s piloting four CCI3* first-timers around cross country later this afternoon. Godspeed, Boyd.

Marilyn Little nearly pulled off a double clear with RF Quarterman, coming in just one second over the optimum time of 8 minutes, 22 seconds to move up from 13th place to sixth on 46.6. Lynn Symansky and Osborne 9 slipped a few spots down the leaderboard from third to seventh with 5.6 time penalties for a score of 47.4.

Waylon Roberts and Kelecyn Cognac, who only just made it off the wait list when the ground jury kindly let them jog yesterday morning and squeezed them into the order of go, made it count, smoking the clock with the fastest time of the day at 8 minutes to move from 18th to eighth on 45.8. 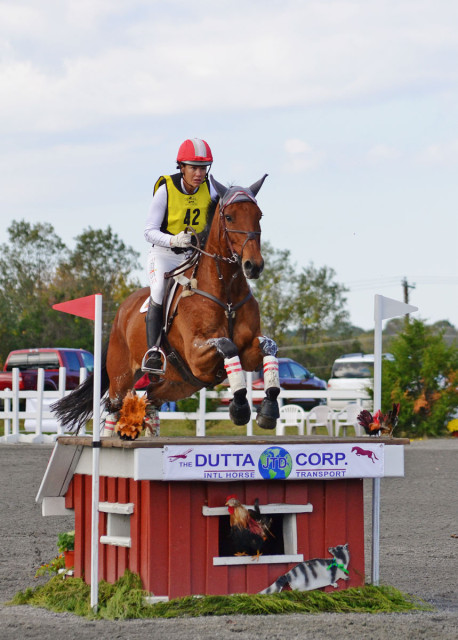 Buck Davidson and Quasar moved from equal 19th to eighth on 49 with a double clear, with Kelly Prather and Truly Wiley also enjoying a healthy move up the leaderboard from 21st to ninth on 49.3. And we’re bursting with pride for our very own Maggie Deatrick, who jumped double clear with her own Divine Comedy to move from 37th to 11th on 52.2.

Phillip Dutton pulled off two double clears aboard I’m Sew Ready and and Get Ready riding for Kristen Bond, who is expecting her first child. Buck Davidson also jumped a second double clear round about Be Mine. Ryan Wood had a good day, jumping double clear with Fernhill Classic and jumping clear with just 2.8 time with McLovin.

Double clears definitely made the difference on the leaderboard today. In addition to those already mentioned, the following combinations also jumped clear inside the time: Rachel Wilks and River King, Andrew McConnon and Ziggy, and Will Coleman and Soupçon du Brunet — who moved from 86th all the way up to 32nd to win the Biggest Mover Award.

Though 52 combinations in all jumped clear, about half the field, Derek di Grazia’s track certainly took its toll. Overnight leader Matt Brown and Happenstance picked up 20 penalties at 7c, the corner coming out of the first water complex, to end their fairytale run. Twenty-two riders in all picked up jumping penalties, with 10 being eliminated and nine retiring.

The only injury on course came when Victoria Long parted ways from all that Jazz at the angled brush at 11b. She was up right away, though holding onto her arm. After being examined by the medics, she was taken to a local hospital for observation and to X-ray her arm. We’ll update you on her condition when we know more.

Be sure to check Sally’s live updates thread here for detailed information on what exactly went down in the CCI2*. CCI3* cross country is about to get underway now, so be sure to follow along with Sally’s live updates and Twitter to stay up to date. And keep checking back for more more from Fair Hill. 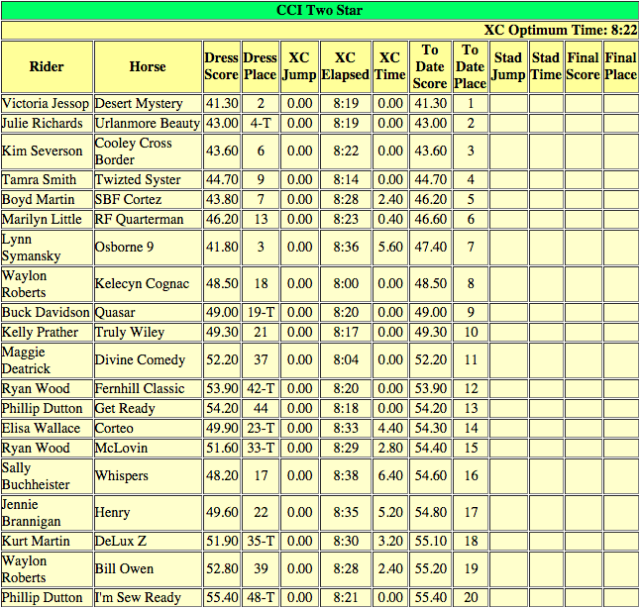