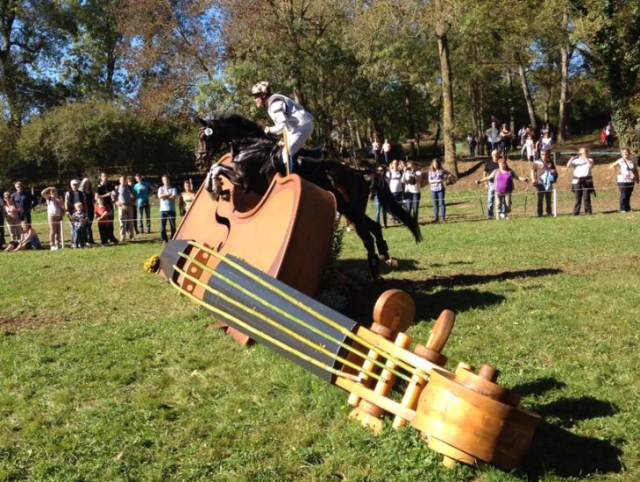 How cool of a jump is this? Photo via Arnaud Wajdzik on Twitter.

Cross country has just completed for the six and seven-year old divisions at Mondial du Lion, and the leaderboards have shifted going into tomorrow’s show jumping.

In the six-year-old CCI*, Michael Jung has taken command aboard Star Connection, who was in second following dressage. As we reported yesterday, this horse has quite an impressive record already, and it should come as no surprise that he’s taken the lead in this young horse championship.

Chris Burton and Dutch Man Retto moved up from third to second with a double clear round. Overnight leaders Vincent Martens and Eiskönig elected to retire on course after two refusals towards the end.

Canada’s Lindsay Traisnel and Ulysse de Rubercy had a great day on cross country, finishing with a double clear round to move from 10th to 8th on their original score of 48.8. U.S. rider Liz Halliday-Sharp also had a great run, coming home with 6.4 time to add to their dressage score.

The vast majority of the starters today came home double clear, which is impressive for these young horses. Two pairs chose to retire on course, and four were eliminated.

In the 7-year-old class, Thomas Carlile and Tenareze moved up from second into first place with a double clear effort after overnight leaders Nicolas Touzaint and Carentinhus were eliminated on course with three refusals.

Once again, most of the pairs completing came home double clear, so the leaderboard remains relatively unchanged aside from a few pairs who did not make it home. One pair retired and three were eliminated in this division.