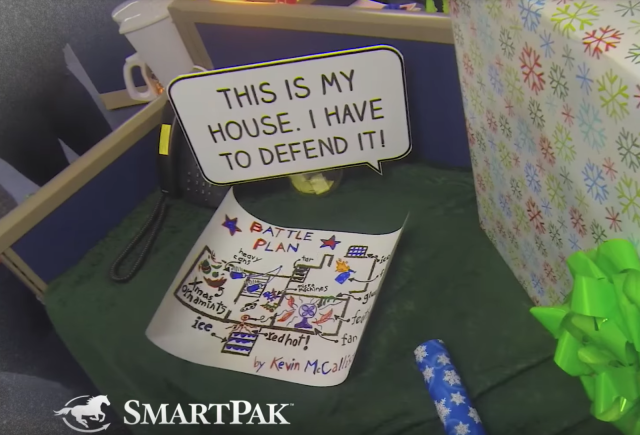 It’s that time of the year and you know it’s getting festive up in SmartPak HQ. Unlike my own office holiday decorations, comprised primarily of dirty coffee mugs and cookie crumbs on the keyboard, SmartPak employees go all out to show their Christmas spirit.

Take it away, SmartPak!

At SmartPak, we’re a festive bunch. We’re also a very competitive bunch, which makes office competitions really, well…competitive. And around the holidays, we hold an office decorating contest where the winner gets to donate money to a charity of their choice. This year’s contest was our best yet — that’s not to say 2013’s contest wasn’t awesome, but this year topped all previous years.

In the end, the Creative Department’s portrayal of Home Alone earned them the win, followed by the IT System Administrators (The Trans-SmartPakian Horsechestra) in second, and Merchandising (Winter Wonderland) and the Customer Care Phones Team (reindeer barn) tied for third.

Gotta admit, I found myself rooting for the IT guys: