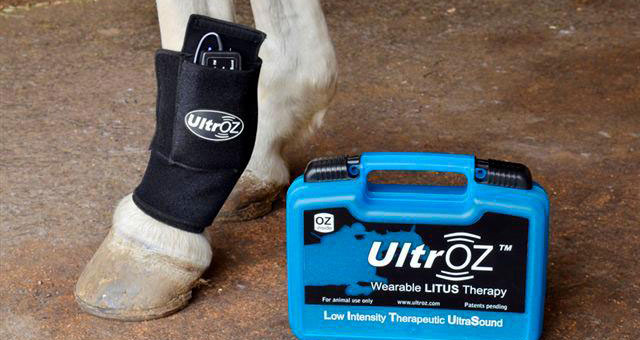 Last week, we asked you to send in your stories telling us why your horse should win a free two-month trial of the state of the art UltrOZ Therapeutic Ultrasound System. We received some absolutely wonderful submissions, and we’re putting the final decision to a vote decided by you!

Take a look at the top submissions received and then choose your favorite in the poll below. Voting will close on Thursday, August 14 at 5 pm EST, so get your votes in early! Many thanks once again to Hamilton BioVet for offering this great opportunity. Good luck to all of our finalists! 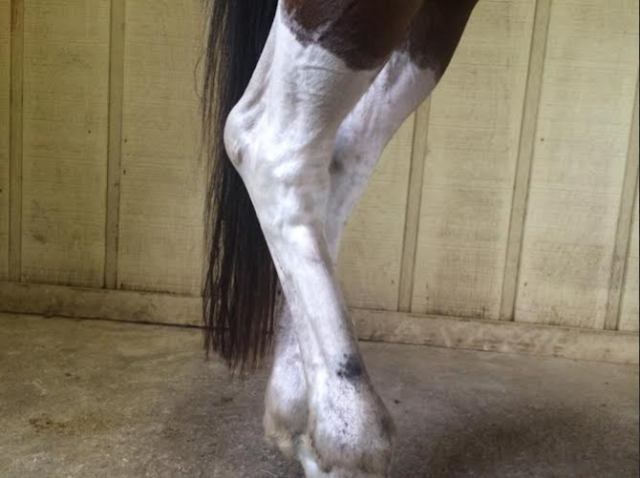 I never really believed in words like: equine therapy or fate. Why would I spend that kind of money on my horse who can’t verbalize to me if it works? Then I met Results Equine Therapy and the results were…eye opening. With her techniques, a 2 year battle of resected hooves due to WLD finally dissipated and he is happy. In May, we won first our first Novice event and I cried and cried in happiness.

I work different jobs (4) to pay for my horse and for the best care and I am so incredibly excited for this new show in the area, Stableview, so I’ve saved and saved. But this is the world of horses and we are often the victims to sudden unpredictability of inflammation. Three days ago my guy came into the barn with lumps on his hock. No heat, no lameness, no reaction. But squishy, fluidity, lumps.

My guess is thoroughpin but until the vet visits I can only feel the weight of the world. I know I am not the only person to want to boil over at the end of the day when you have worked so hard, you could just almost reach it for it to be yanked away. Hamilton BioVet, I am one rider who never believed in fate but at the end of my rope I saw the contest on EN. Make me believe. 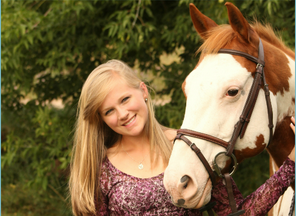 It was Friday, July 13, 2012, and a drought had overtaken the summer making the ground hard and slippery.  This never occurred to me until later when my horse turned up lame in our jogout.  A tiny stumble on our cross country ride would lead to a one of the most difficult times in my life.

That minute slip gave my horse eight months of stall rest and rehabilitation to heal a soft tissue injury.  It was agonizing to watch his personality change from relaxed to unpredictable.  Somehow I remained positive, despite multiple kicks during our handwalkings, and Casino made a full recovery, that is until January 2014.

When the temperature plummeted to -60 degree wind chills, the horses stayed in to stay warmer.  They finally were able to go back outside and Casino must have felt fresh because whatever horseplay he participated in brought on a second injury to the same leg.  This time, we used shockwave therapy to speed the healing along.  Seven months later and the injury still lingers on and off.  If I win this two-month trial, it would mean the world to heal the horse that has been there for me for eight years. 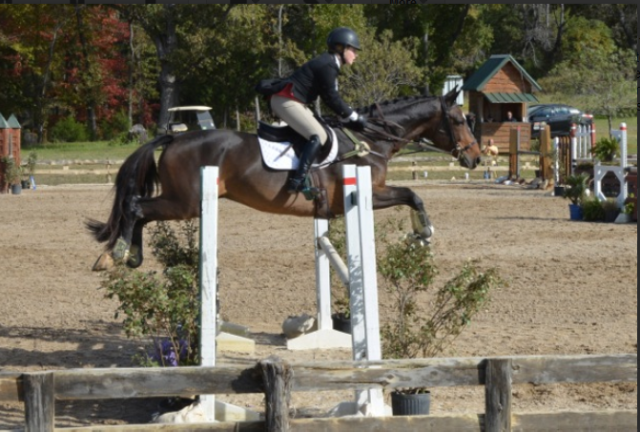 Hi there, my name is Hannah Louis and I am about to be a senior in high school in Dallas, TX.  I am currently competing at the Preliminary level with my 17 year old (or so we think) Warmblood Gelding Morales (aka Moe).  After a successful move up to Prelim this past June, I was so excited to learn that we had qualified to do a CIC*, and decided to aim for the CIC at Chatt Hills in late August.

Just this past week, Moe has become very sore on his left front ankle, and our vet has come to the conclusion that it has something to do with his suspensory.  After reading countless studies and testimonials on the Hamilton Biovet website, I thought this system might help Moe to feel better.  With the help of the UltrOz system, I am hoping that we can have Moe feeling good to go for Chatt Hills at the end of the month.

Considering I am about to go to college in a year, and Moe is getting up there in age, I am willing to try anything to keep Moe feeling his best so that we can have a great last year together, and complete our first FEI event! 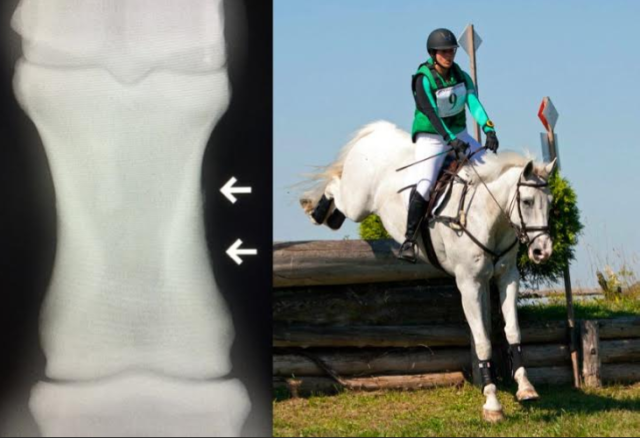 My Preliminary campaigner, Nicky, has always been incredibly sound until a freak accident this spring resulted with a fractured pastern bone. Nicky has always been spooky and this primarily shows up in the Show Jumping. To combat this, we cross train in the Jumper ring. While showing in the 1.15m Jumpers in Virginia, we came to this first fence with a beautiful distance.

I closed my leg and expected Nicky to come off the ground. Instead, he looked at the jump, stuttered off the ground but always the good event horse he jumped anyway. He cleared it with his front end but smashed through with his back end, sending rails into his front legs. He was tangled and landed wrong, pulling up dead lame.

I immediately got him to the vet and we discovered he had fractured his pastern bone. While this is a devastating diagnoses, the fracture is in the best place possible and he will come back 100%. With a trial of an UltrOZ Therapeutic Ultrasound System from Hamilton BioVet, I’ll be able to speed the recovery of Nicky’s fracture and treat the subsequent compensation discomfort. This will definitely help get my amazing horse comfortable and competing again! 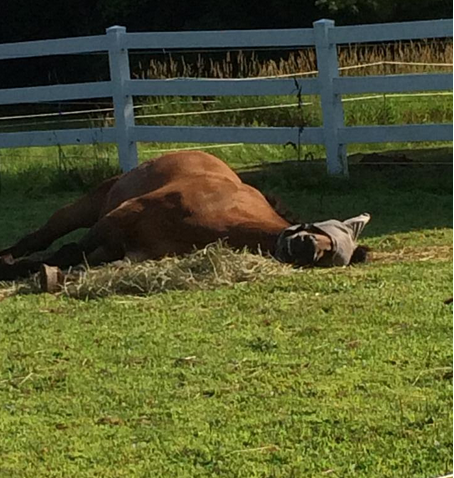 Enjoying a nap on the hay pile!

My mare Ariat and I (known as the BeastEventer) have had a rough year. Just as things were starting to look up, coming back from a flair up of an old injury after our big Classic Novice 3-Day adventure, the Beast got cast and gave herself a carpal bone chip. We have spent many months resting and now rehabbing.

People think, “large, drafty, calm, should have no problem resting!” WRONG! The months she was on rest were the most trying months we have had together. After flunking hand-walking 101 we were given permission to start back walking under tack.

We are now walking a fair bit and she seems comfortable enough, but I am concerned about her long term soundness and comfort. Ariat is not a mare who can be turned out to pasture to retire, she needs a job. She tolerated loved her job of packing me around events. Now, we are hunting for a new job! After researching the new UltrOZ Elite from Hamilton BioVet I feel like it would be just the perfect technology to help reduce the strain and inflammation in her carpal joint and also help the bone chip heal completely. 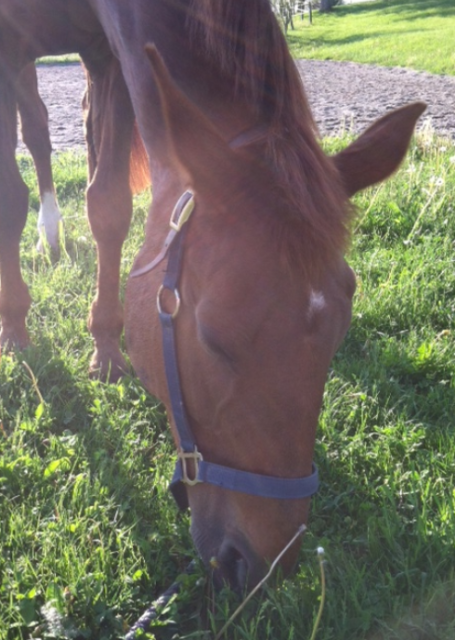 One beautifully clear night at the barn to my surprise a shooting star shot across the sky. On a whim, I made a wish…why not?  At the time I was seriously contemplating giving up on eventing after a bad crash on XC.

About a month later, I received a call from my trainer who informed me that an older, former advanced level event horse was looking for a new home.  Seemingly as fast as that star left the sky a month before, a beautiful chestnut mare came into my life. She has been the best teacher I could ask for. She was my wish come true.

She hurt her check ligament this past spring before the show season started. I’m happy to inform she is now healed and getting back to work. I wish I had found UltrOz Therapeutic Ultrasound System to help in the healing process but I think it would still be very beneficial for her as she can come out a bit stiff likely due to arthritis setting in her joints.  I am hoping UltrOz will help her stay comfortable and able to participate in the sport she and I love for as long as possible. 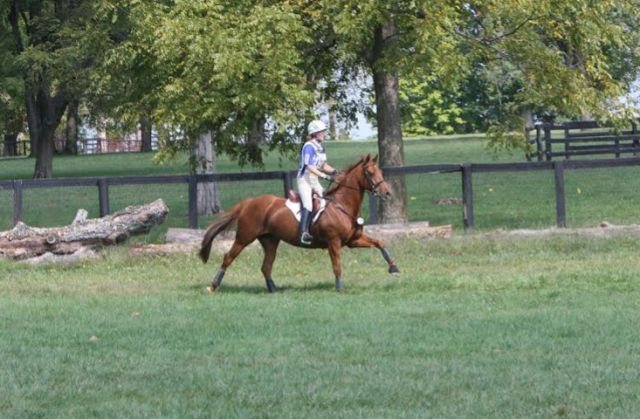 My little red head has been on a very long recovery program this summer. Emmy is a 14 year old Welsh Cob/TB cross. She can usually be found around Area IV events impatiently waiting for her turn to jump. She started feeling off up front this spring so we started to treat the front end, only to find on further exploration that the cause of the mystery lameness was a small hock fracture. We have treated that and are on our third month of hacking around the farm (not the red head’s favorite activity)!
I would love to give the UltrOz a try so that we can get back to doing what Emmy loves best, running cross country!