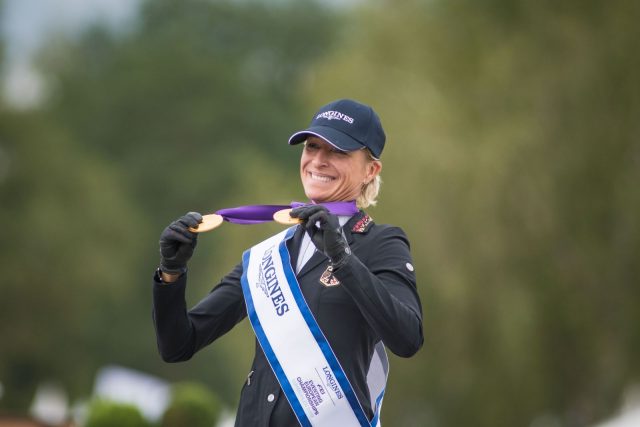 The 2019 FEI Awards nominations have been posted, and we are excited to see a deserving eventer in the mix. Ingrid Klimke, whose double gold medals at the European Championships were the cherries on top of an already bang-up year, is up for the honor of Best Athlete.

Two other U.S. representatives made the ballot: The Wheatland Farm Equestrian Center in Virginia, a USEF/USPEA Center of Excellence for Paralympic Dressage, is up for the FEI Solidarity Award, and Para Dressage rider Marie Vonderheyden is nominated for the FEI Against All Odds category.

The winners will be decided through a system in which 50% of the public’s vote and 50% of the judges’ vote will be combined to give the final result. Voting is open today through Oct. 7, so go vote here today!

Twenty-two total nominees have been shortlisted across five awards categories — click here for their bios:

Peden Bloodstock FEI Best Athlete – paying tribute to the athlete who over the past year has demonstrated exceptional skill and taken the sport to a new level.

Cavalor FEI Best Groom – for the behind-the-scenes hero who ensures the horses they look after are given the best possible care.

FEI Against All Odds – for an inspiring individual who has pursued their equestrian ambitions and overcome challenges and obstacles along the way.

FEI Solidarity – for an FEI Solidarity or equestrian development project, an individual or organization that has used skill, dedication and energy to expand the sport.

The 2019 Awards winners will be celebrated at a star studded ceremony at the State Kremlin Palace in Moscow (RUS) on Nov. 19.