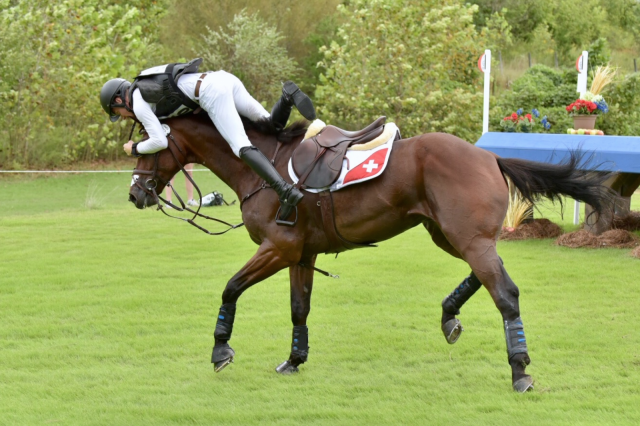 An amazing save for Swiss rider Robin Godel! Photo by Leslie Threldkeld.

If you asked 10 people out watching WEG cross country on Saturday how the course rode, you’d have likely gotten 10 different answers. If you were camped out at the water watching horse after horse say “oh hell no” to the waterfall up-bank, you might report that there was a lot of drama out there. If you spent the day watching riders fist-pump across the finish, your perception may be that it rode a little soft. What’s the objective answer?

A few additional stats from our friends at EquiRatings: 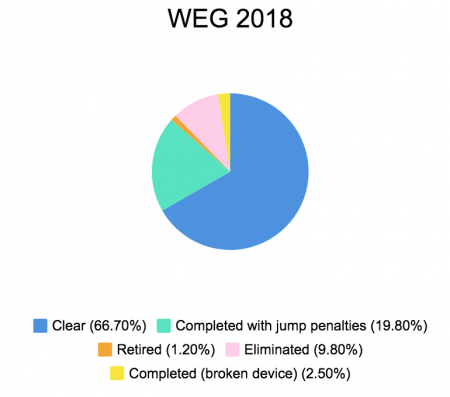 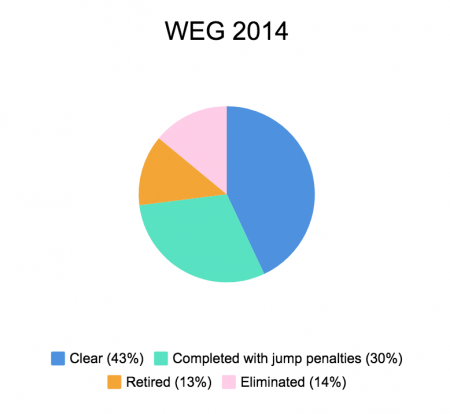 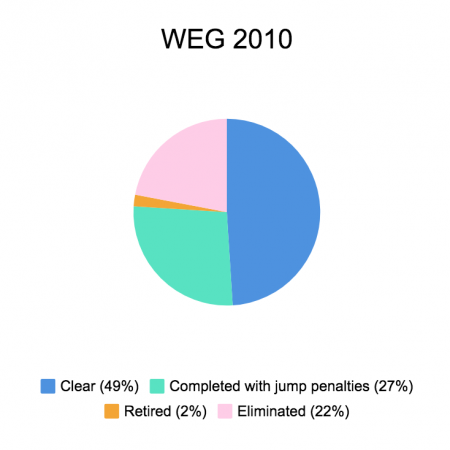 So what defines a successful cross country competition? There is no hard and fast rule for what percentage of the field, ideally, should be expected to finish, nor of what percentage of those finishers should complete with no jumping faults. Add to that a revolving door of variables like footing and weather and the equation grows even murkier.

Challenging athletes without punishing the horses is a balancing act that, if executed poorly, could result in a “dressage show” at one end of the spectrum and disaster at the other. According to the FEI’s Course Design Guidelines, the ideal course is doable but not so doable so that every horse/rider combination makes it through the finish flags:

The aim of the designer is to provide a suitable test for the level of Competition without exposing Horses and Athletes to a higher risk than is strictly necessary to produce the right test for that level.

To call a course designer’s job “tough” is like calling Hurricane Florence “damp.” These people have one of the hardest jobs in the sporting world, imagining and then bringing to life a gauntlet of obstacles that rewards the best while (safely) weeding out the underprepared, and nowhere are the stakes higher than with a World Championship course.

WEG course designer Capt. Mark Phillips weighed in on how he felt the day went, beginning with his first criteria for a successful day: safety. “I think we had a good day,” he said. “The vet and the doctor were static all day, and that makes me very happy. One or two people tipped off, but that’s part of the thrills and spills of cross country, and we managed to keep the horses on their feet, which is rather important.”

The 2018 WEG is the first championship to use the new format, approved by the FEI General Assembly in 2016, that codifies the Olympics and WEG as four-star level for dressage and show jumping, with cross country set to three-star dimensions with a 10-minute optimum time and 45 jumping efforts. The 2020 Tokyo Olympics will also run in accordance with this format.

“Doing a World Championships to the three-star level at 10 minutes for the first time, we were going into unknown territory,” Mark said. “We had a lot of really good four-star horses and the best riders in the world, so it was a difficult one but I think we saw people get around who you might not have thought would get around, and I hate to name names but when people like Mark Todd and Chris Burton are having a problem, the course probably did its job.”

Trouble today was spread across several different jumps but one complex proved particularly troublesome — 15 combinations had problems at fence 10ABCDEFG, the Mars Sustainability Bay. Eight combinations ran into trouble at fence 14ABCD, the CSX Junction. There were two falls and a refusal at fence 18ABC, the Land Rover Turn; two refusals at 9B, the World’s Best Bank; and one problem apiece at fences 5A, 20A, 22B, and 24F. 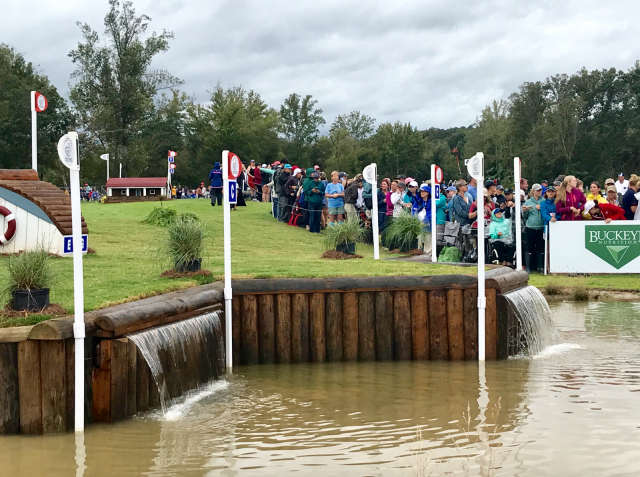 Several horses took issue with the waterfall up-bank at #10. Photo by Leslie Wylie.

Remarking on the water complex at 10, CMP began by noting that the fence into the water was a normal three-star fence with a 170-centimeter drop — it could have had a 180-centimeter drop and still fallen within FEI guidelines for the level. The bending line to the boat, where Boyd Martin ran into trouble with Tsetserleg, was a typical question. Of the waterfall, CMP said, “There were lots of options, and it’s a championship, and it’s sort of fun to put a joker in the pack like that because for the team competition it can make all the difference.”

And indeed, it did. The competition continues on Monday after show jumping was postponed due to heavy rains from Florence. The final horse inspection is still scheduled to take place today at 3 p.m. EST. We’ll be back and bringing you all the latest!