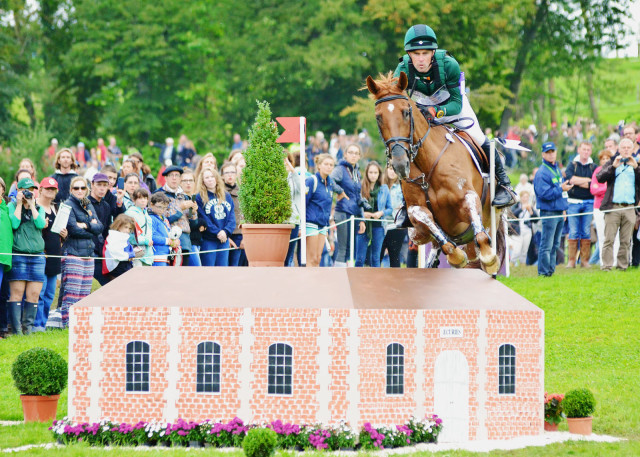 To call a four-star cross-country course designer’s job “tough” is like calling the footing on last weekend’s WEG course “damp.” These people have one of the hardest jobs in the sporting world, imagining and then bringing to life a gauntlet of obstacles that rewards the best while weeding out the under-prepared — ideally without causing bodily harm.

The stakes are even higher with a world championship course. And, to further complicate matters, there is less precedent upon which to base design decisions since WEG rolls around just once every four years. How do you know how far to push the envelope? The job requires more than experience and knowledge. It’s a test of instinct.

Challenging without punishing is a balancing act that, if executed poorly, could result in a “dressage show” at one end of the spectrum and tragedy at the other. According to the FEI’s Course Design Guidelines (updated February 2014), the ideal course is doable but not so doable so that every horse/rider combination makes it through the finish flags:

The goal of seeing as many finishers as possible is desirable for all levels, but the degree of difficulty must not be compromised in order to achieve this, for example by the overuse of alternatives.

But what does “as many finishers as possible” translate to? There is no hard and fast rule for what percentage of the field, ideally, should be expected to finish, nor of what percentage of those finishers should complete with no jumping faults. Add to that a revolving door of variables and the equation grows even murkier:

As a general philosophy, the numbers of finishers is more important than the number of clear rounds. It has to be accepted that the quality of the field and the weather conditions can impact on the statistics and that, particularly at the higher levels, many Athletes now choose to retire once they are clearly out of contention or are not going to achieve a qualifying result, and that these issues are reflected on the scoreboard with more retirements and less ‘cricket scores.’ Similarly the ‘elimination after an Athlete fall’ will create many more eliminations.

Pierre Michelet’s massive, technically challenging WEG course had the absolute respect of the world’s top riders. While acknowledging its difficulty, they also unanimously praised it for being fair and rewarding a forward, attacking ride. The game changer turned out to be the deep going, a variable that felled what seemed like competitor after competitor and wreaked havoc on the scoreboard.

In a press conference at the end of cross-country day, one journalist asked Pierre how he felt about the way his course rode. He responded that he was pleased, that it had been an “exciting” competition. He noted that while issues on course abounded in the morning, the rounds steadily improved throughout the day, despite the deteriorating footing, because of smarter riding: Riders were starting out slower to conserve energy and were taking more options.

Pierre’s cheerfulness surprised me — the course’s toll on competitors had seemed severe. Upon what was Pierre drawing his analysis? From a course designer’s perspective, what is the benchmark for a successful cross-country day versus an unsuccessful one?

Here is what the day looked like on paper: 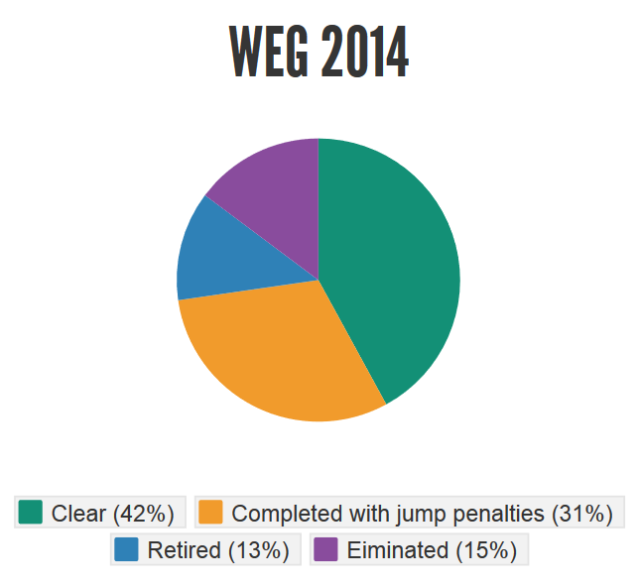 In a nod to the FEI Course Guidelines’ emphasis that “the numbers of finishers is more important than the number of clear rounds,” 73 percent of WEG 2014 competitors who started the course completed it. That percentage surely would have been even higher had the footing been decent, as many of the competitors’ issues on course stemmed from their horses’ exhaustion due to the heavy going rather than the obstacle itself.

Despite the footing wild card, the percentage of finishers at WEG 2014 is just slightly less than that of the last WEG in Lexington, which saw a 76 percent completion rate. 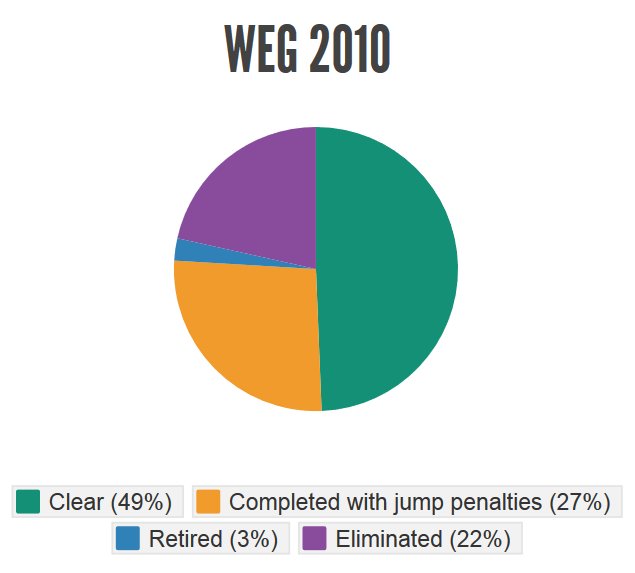 To further put the WEG completion percentages in context, let’s compare them to those of regular four-star events. You might guess that there would be fewer finishers at a WEG because of the increased difficulty of the course, but you’d be wrong — the course may be stiffer at WEG, but so is the caliber of the competition, so it balances out or even falls a little short. All three of the CCI4* events that have taken place thus far this year had lower completion percentages than the past two WEGs.

First there was Rolex in April, which had a 71 percent completion rate: 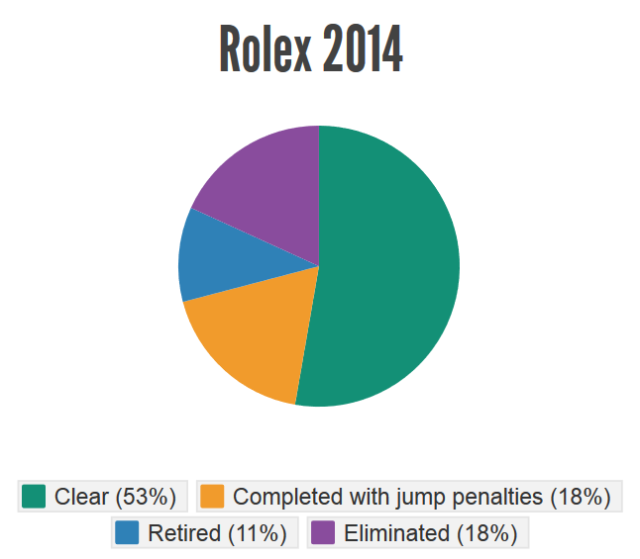 Next was Badminton in May, which thanks to treacherous footing coupled with a tough track had one of the lowest completion rates of any CCI4* in recent history, 44 percent: 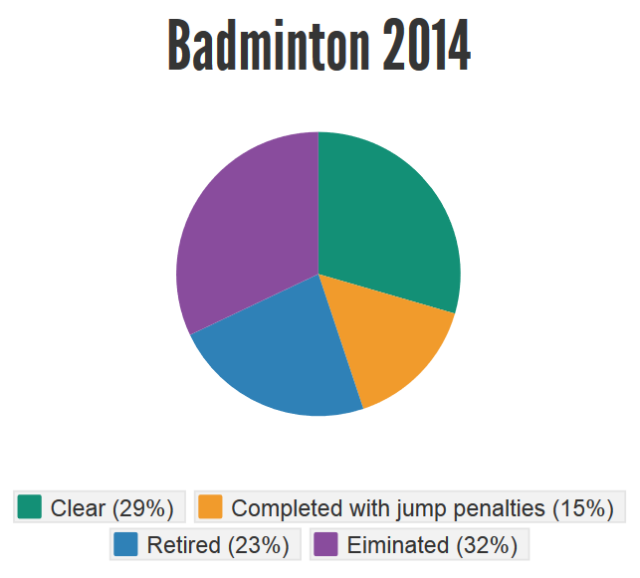 Luhmühlen fared slightly worse than Rolex but significantly better than Badminton with a completion percentage of 68 percent. Not reflected is the tragic rider death that also occurred here. 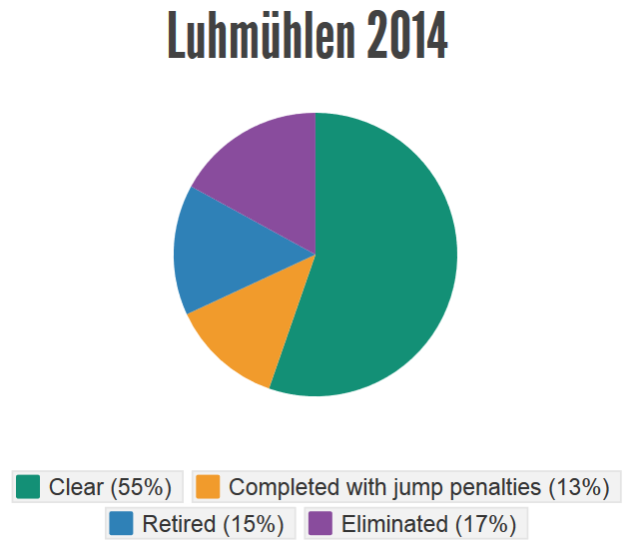 Looking back to 2013 for the other three CCI4* events on the calendar, Pau had 60 percent completion, Burghley had 69 percent and Adelaide had 85 percent. What that all looks like together: 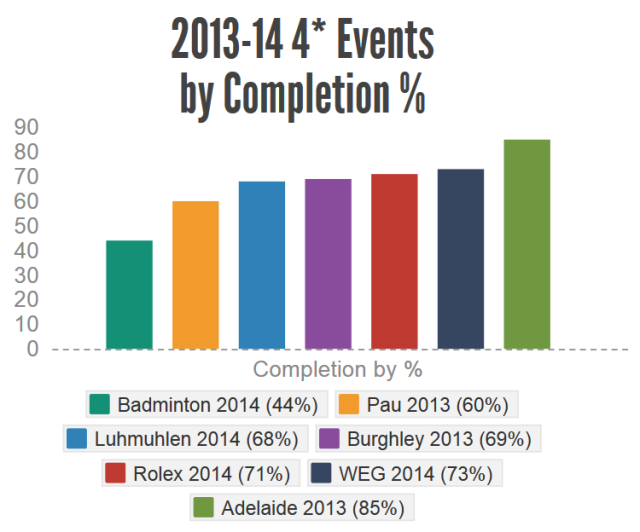 So, WEG actually had the second highest completion rate of any four-star event in the last 12 months. Surprised? I was.

It was also surprising to see how close together most of the percentages were with the exceptions of Badminton, which had a fluke year, and Adelaide, which had far fewer entries than the other events and thus may provide a less representative sample. It’s not like course designers just sit down with a pen and piece of paper and say, “I’m going to design a course that approximately 70 percent of competitors will be able to complete.” So how do they do it?