Move over, Advanced, with your fancy dressage tailcoats and show-boaty jumps. For one glorious week each year, we shove the Big Name Riders out of the limelight and focus instead on the cutthroat ranks of … Jr. Beginner Novice 14 & Under.

This year 38 of the country’s most formidable junior riders are facing off over the toughest yellow numbered jumps in the land right here at the Kentucky Horse Park  for the 2019 American Eventing Championships. The field is wide open but this much is certain: The competition is fierce. 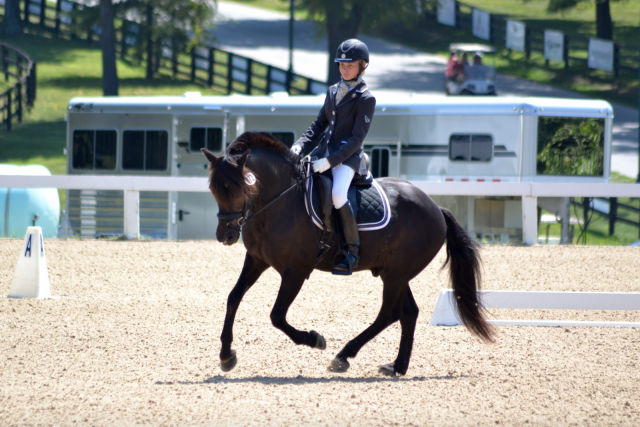 Maren Hanson and In My Feelings. Photo by Leslie Wylie.

Maren Hanson and In My Feelings are our dressage leaders heading into cross country tomorrow on a score of 28.3. You might recognize “Mighty Maren” from EN’s 2028 Olympic Talent Watch series — we featured her back in 2017. Now at the ripe old age of 12, Maren and “Drake” — who at 24 is twice her age, although you wouldn’t know it from watching him strut his stuff in the sandbox — are making their debut on the national stage, well, in eventing at least! The pair is coming off a big 6th place overall finish at the U.S. Dressage Festival of Champions last weekend at Lamplight Equestrian Center in Wayne, Illinois, which coincidentally hosted the AEC from 2007 to 2009.

Today’s result was an emotional one for Maren, who rode with the late, great Ann Haller. Her mother, Christie, got a little teary-eyed when recalling, “I told her before her test to ride her best for Ann.” We think Ann would be proud, Maren.

Indeed, there were a lot of feels out there today. One of my favorite tests belonged to Connor Stegeman and Zip’s Bangee which, while it may not have topped the leaderboard board, was one that Connor will remember forever. It was their final dressage test together, as Connor has outgrown her 21-year-old Appaloosa Pony of Americas and will be moving on to a bigger horse after the AEC. Overwhelmed by love and appreciation for her beloved pony, Connor burst into tears after the final salute. 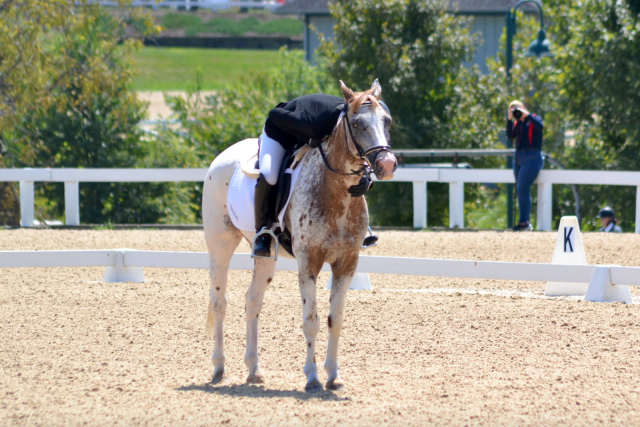 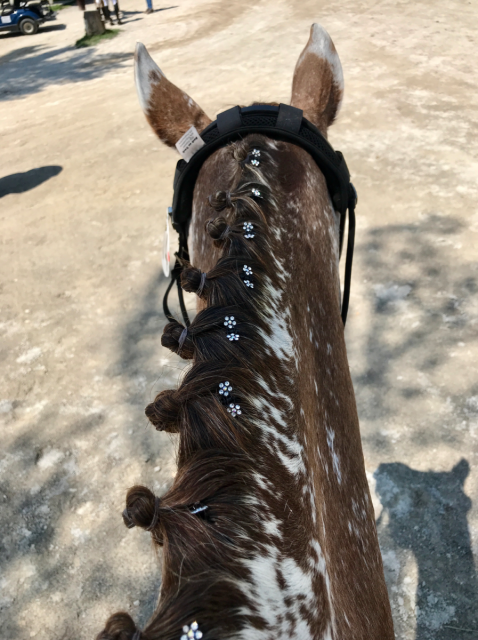 Every combination in this division — in every division, really — has their own unique story they carry with them up the centerline. For instance: Riley Jones‘ pony Señor Santana was a rescue from a farm seizure situation wherein several horses of the 30 horses Santana lived with were already deceased. He’d been restarted as a western pony when Riley brought him into her life about five years ago, and she’s since shown him the ropes of eventing. 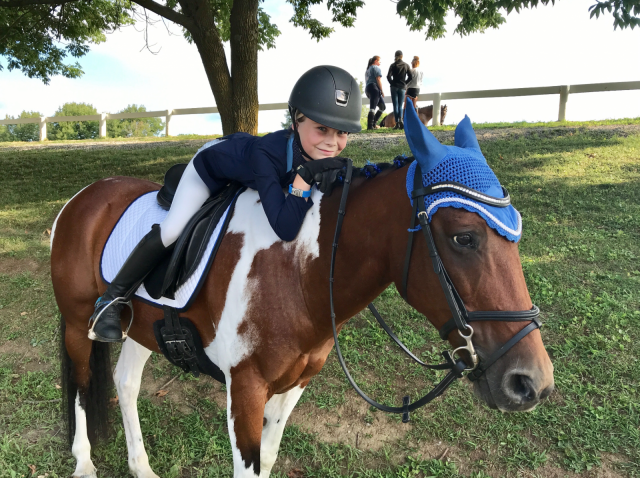 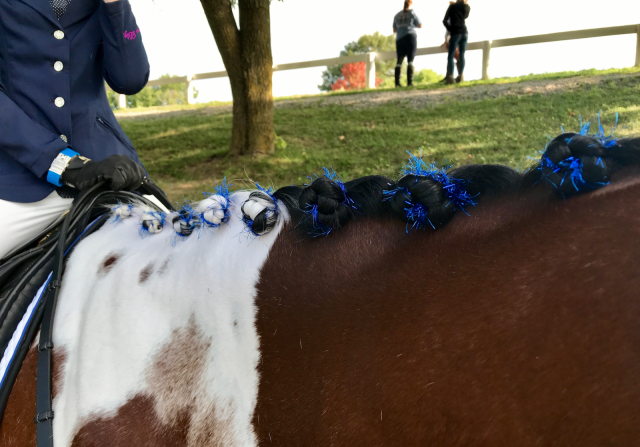 Can we get a closer look at those sparkly blue braids? And we hear that there is much more where those came from on cross country … he even sports a unicorn horn! Photo by Leslie Wylie.

Riley kindly took the time to tell us about their test and their partnership.

For these young riders, their horses and ponies are much more than competition partners — they’re friends. Kloie Hicks describes her pony Sugar Rush as “fun, loving and caring.” 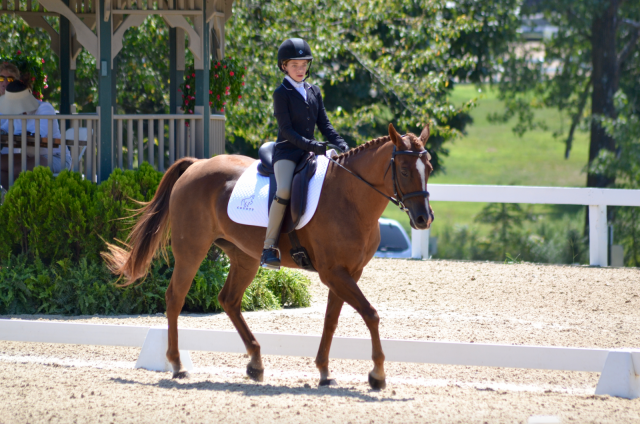 It’s neat to see mounts of all shapes, sizes and colors out there — truly, any horse can Go Eventing! Among the less orthodox breeds represented: a Norwegian Fjord, an Andalusian/Appendix Quarter Horse cross, Haflinger, Nokota, Morgan, and a Canadian Sport Horse. 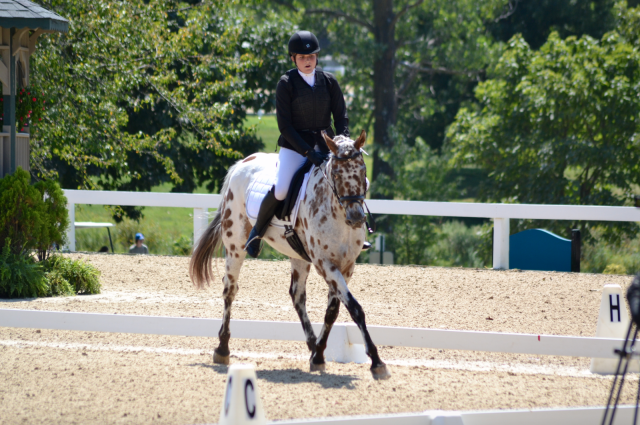 Nothing wrong with a good-looking classic bay, though: 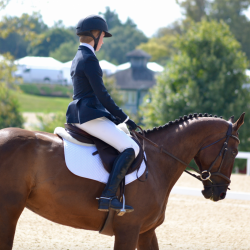 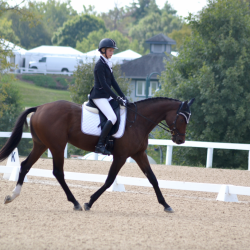 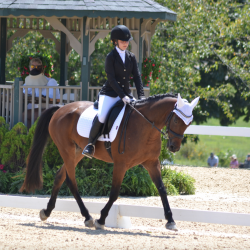 With the top 13 competitors in the division separated by less than a rail, the jumping phases are bound to be nail-biters. A few cross country machines and show jumping powerhouses to keep an eye out for:

Macie Sykes and Delilah’s Boy, her own Connemara gelding, have gone clear in both jumping phases in their past five events. They sit 7th after dressage, not quite replicating the winning score of 19.5 they posted at Pony Club Championships earlier this summer but certainly still in the mix! Love that smile, Macie. 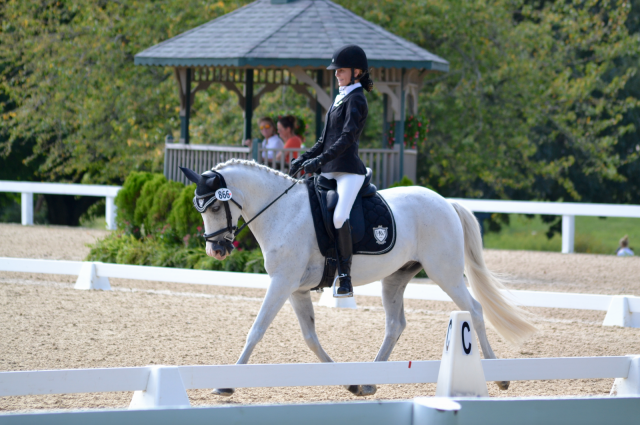 More pairs with super jumping records to keep your eye on: 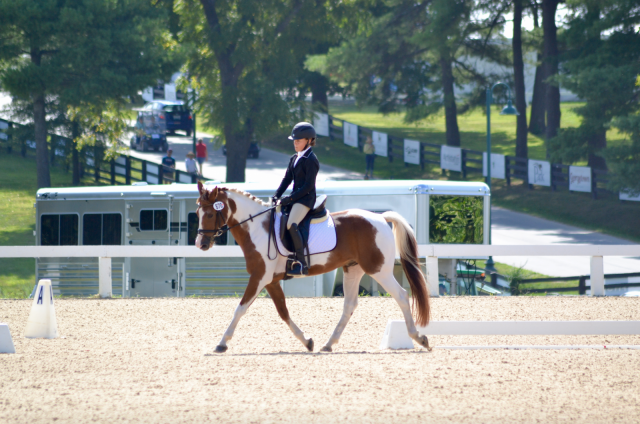 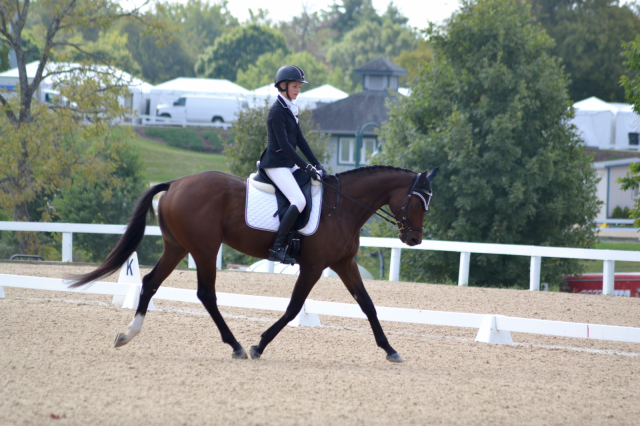 A job well done to all these young riders! 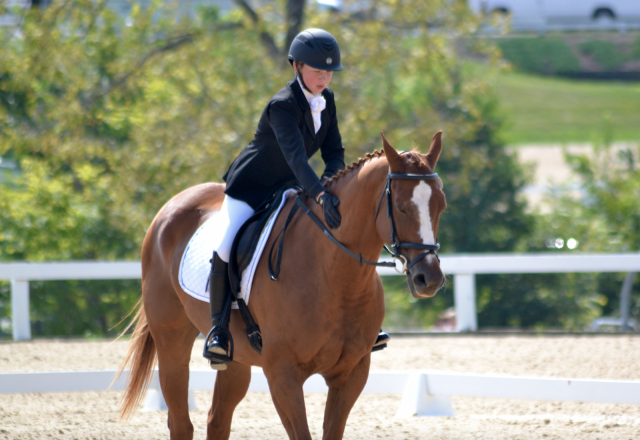 Make no mistake — these kids are coming for us all, and we can’t wait to follow all the dramatic twists and turns of this year’s Jr. Beginner Novice 14 & Under showdown. And here’s some great news from the USEA!

You asked and we answered! Thanks to the tireless efforts of the USEA CEO Rob Burk and EEI Executive Director Lee Carter we have been able to add Beginner Novice Show Jumping to the livestream schedule at #AEC2019 Tune in to https://t.co/UZMfXbitYp at the listed times to watch. pic.twitter.com/izgAyqm00n

Great to see our lower levels getting the royal treatment — they deserve it! Much more to come. Go Eventing. 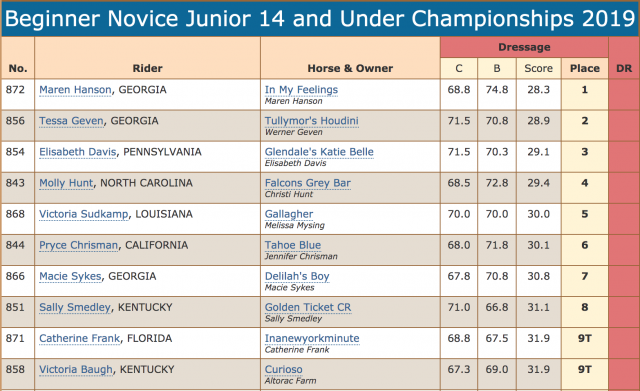