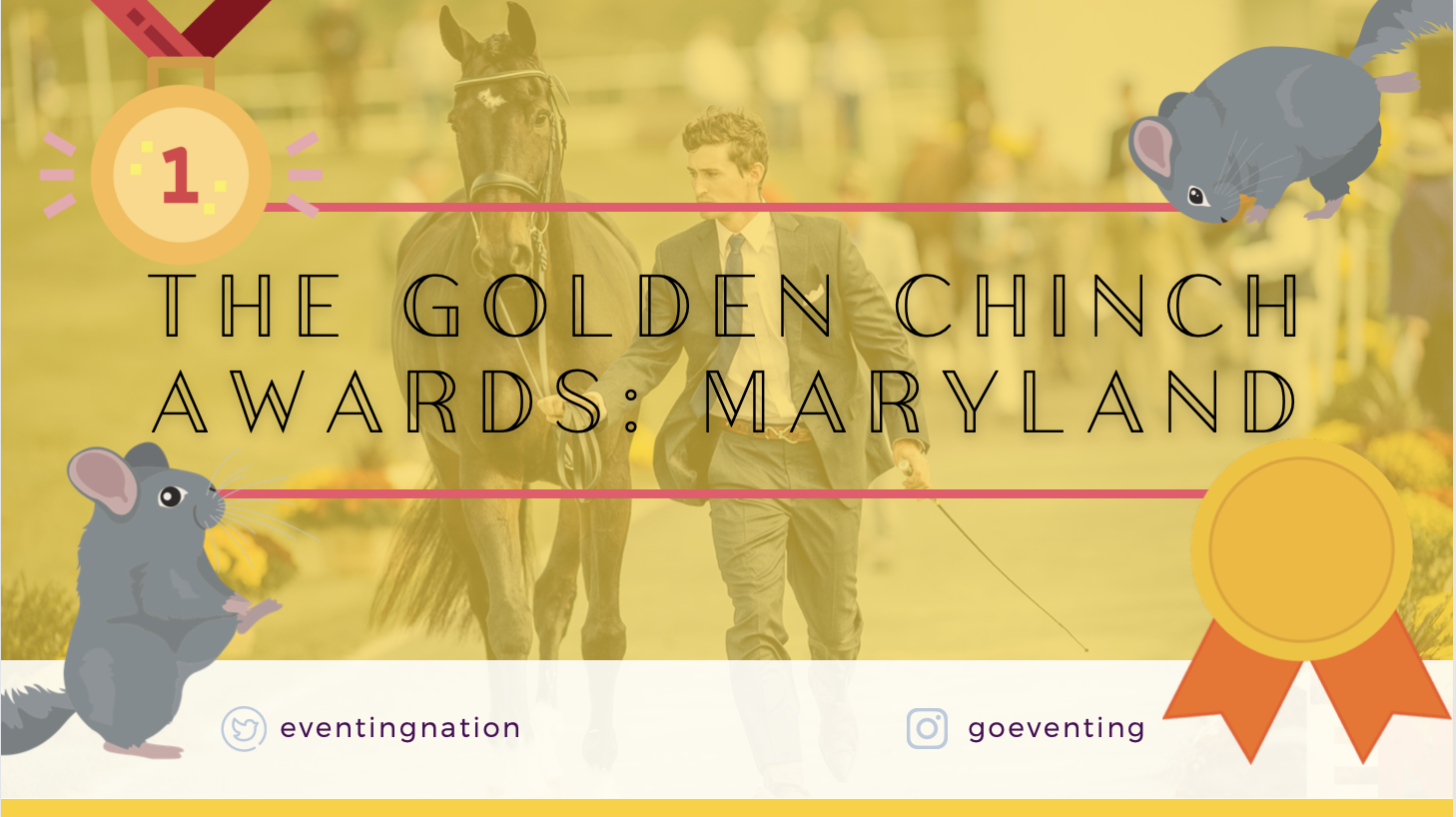 Getting to a CCI5* is an extraordinary accomplishment, and one that many riders will spend a lifetime working towards. Tens of thousands of hours; blood, sweat, tears; moments spent lying in the arena dirt wondering what on earth the point of it is — all of that leads here, to the first horse inspection at one of the biggest competitions in the world, and the validation that you did the right things, pushed through the tough times, and gained entry into the most elite club of all. If you trotted up a horse at the MARS Maryland 5 Star yesterday, know this: you’ve made it. But also know this: I am now going to make fun of you, with love and admiration. Keep on scrolling to meet this year’s Golden Chinch Award winners at the penultimate five-star of the year. 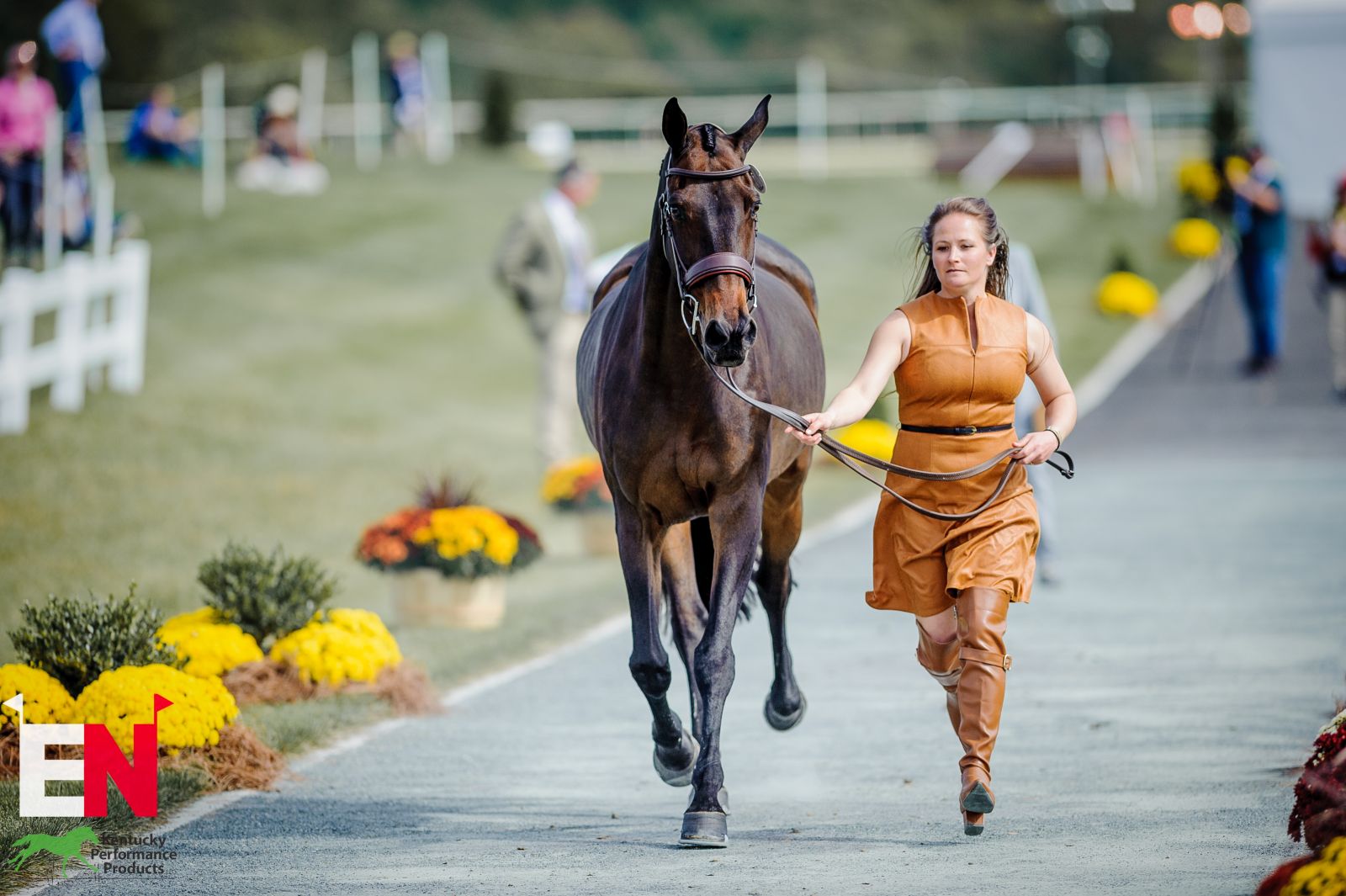 EN boss lady Sally Spickard and I sat out by our little fire pit at our Delaware AirBNB last night, sharing a cigarette and some crab fries (no, not a euphemism) and winding down after a long course walk at Maryland.

I looked at her, my interest piqued.

“She verbally abuses men, sends them a photo of her feet, and then gets a thousand bucks from them,” she explained.

The Golden Chinch for When You’ve Got a Trot-Up at 1, But You Need to Wrangle Those Dogeys at 3 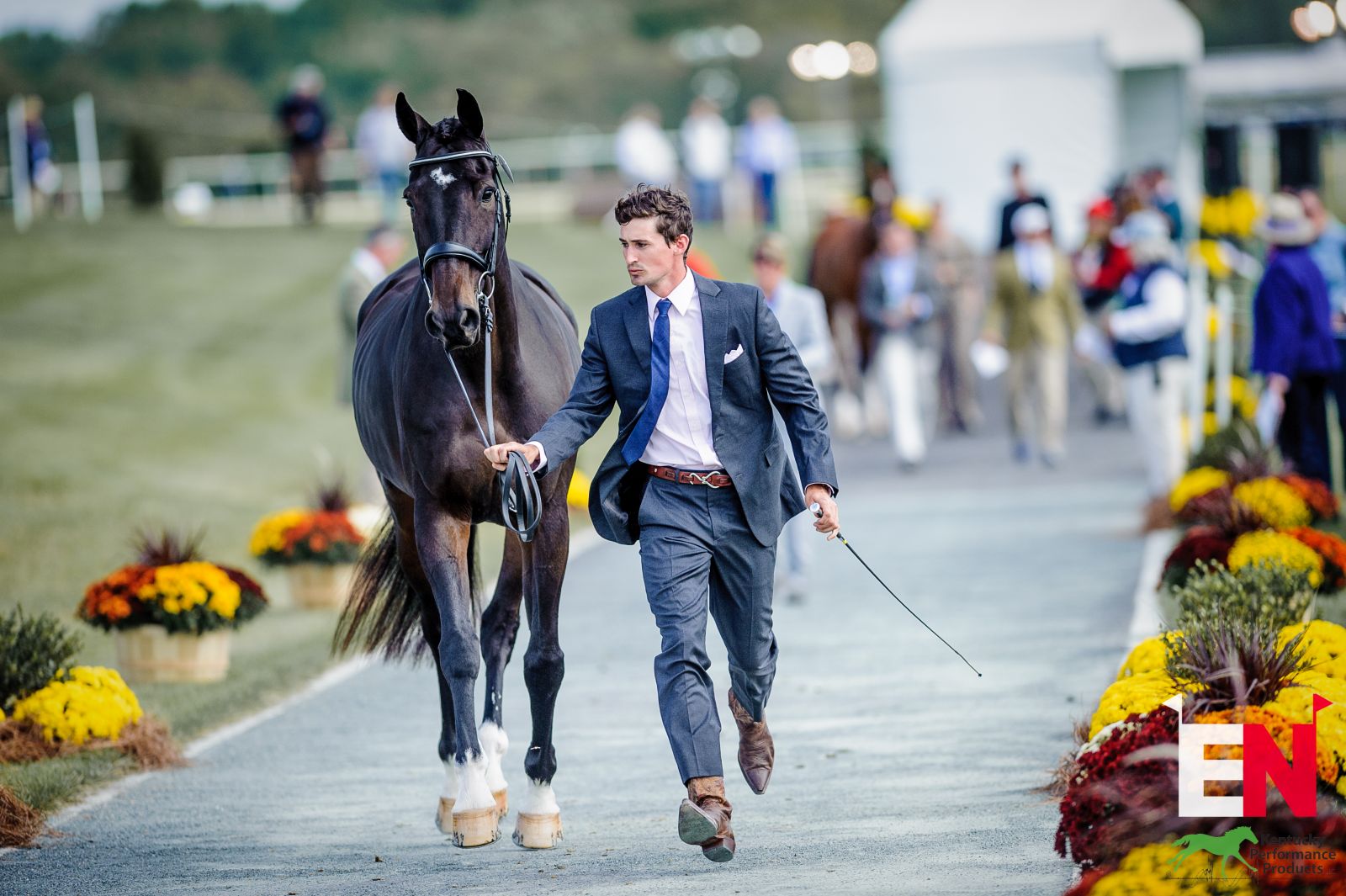 I’ve met Woods Baughman exactly once before this week, and that was in the Burghley mixed zone, where everyone suddenly went really silly and quite odd when it came time to interview him, mostly because he is, let’s be real, very good-looking. He is also a brave, brave boy when it comes to footwear choices. I almost didn’t clock these cowboy clodhoppers as he line-danced his way down the trot-strip, because in my head, I’d already written him off as yet another man in a staid suit. Snore, thought I. More fool me! Woods Baughman is here to put a boot in yer ass, ‘cuz it’s the American way, or something like that, anyway, and he’s got a handy-dandy hoof pick on his belt, too, because what are cowboys if not practical chaps who are ready for just about anything? I, for one, hope that the suit and cowboy boot combo takes over from the regrettable suit and baseball cap situation that has plagued US eventing for far too long. Woods, if you’re reading this, I’ll be wearing my own, very silver, cowboy boots to the final horse inspection — I’ll meet you there for a hoedown. Again, I cannot stress enough that this is not a euphemism.

I’ve been brushing up on some cowboy lingo in preparation, which has been An Experience in and of itself, and so, Woods, let me offer you some sage advice: you’ll never feel more above snakes than you do while competing at a five-star. It can be a hog-killin’ time, or it can be a bit of a bad box, but no matter which hand you’re dealt, don’t be a yellow belly. Try not to get busted off, definitely avoid chewing gravel, and remember that you’re better than a lick and a promise. If you’re angry at me for victimising you in my jog awards, you can crawl my hump at five p.m. today. Ooo-er.

The Golden Chinch for Being the Nicest Boy in Peaky Blinders 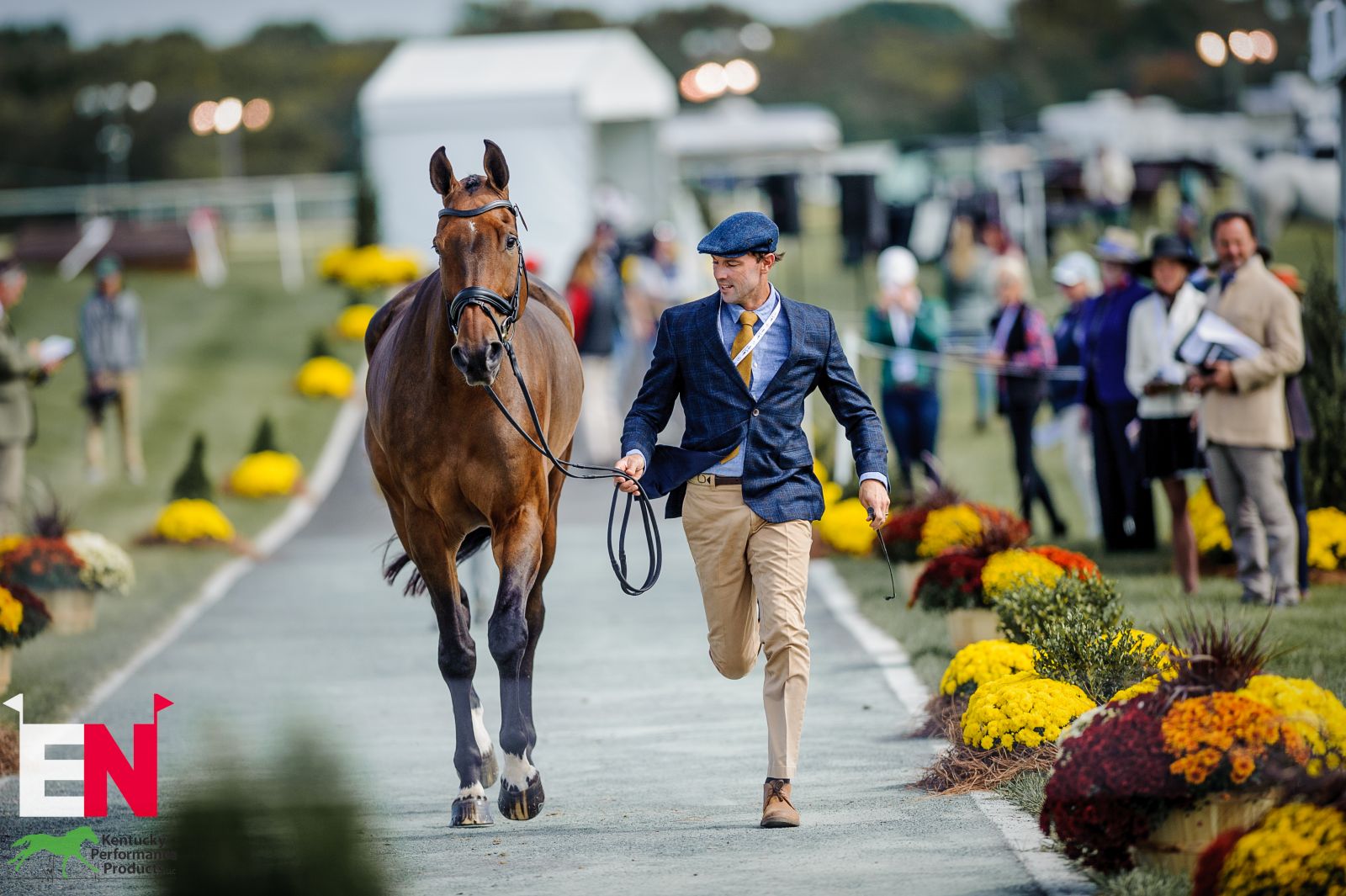 Will Coleman and Dondante. Photo by Tilly Berendt.

Peaky Blinders fever has swept the eventing world, which always makes me laugh, because event riders — as tough and ballsy and undeniably cool as they are — are about as far from Brummy gangsters as you could possibly get. They enjoy the finer things in life, like, um, dressage (although ‘enjoy’ might be a strong word for most) and cocktail parties. I don’t think Will Coleman has ever ordered anyone to be brutally murdered, although I’m willing to concede that I don’t know everything about everyone and I could be totally wrong there. The flat cap tells me that he’d like to think he has a touch of the crime boss in him, but I think what we’ve got here is a walk-on extra role, in which a smiley, sunny Will drives his milk cart up to the Blinders’ den of iniquity and kindly offers them the choice between full, semi-skim, and gold top. It’s important to ensure that one’s calcium levels are tip-top before a long, hard day of doing naughty things. And you know what? Will’s Got Milk? campaign is working on me. Pour me a tall one, chap. 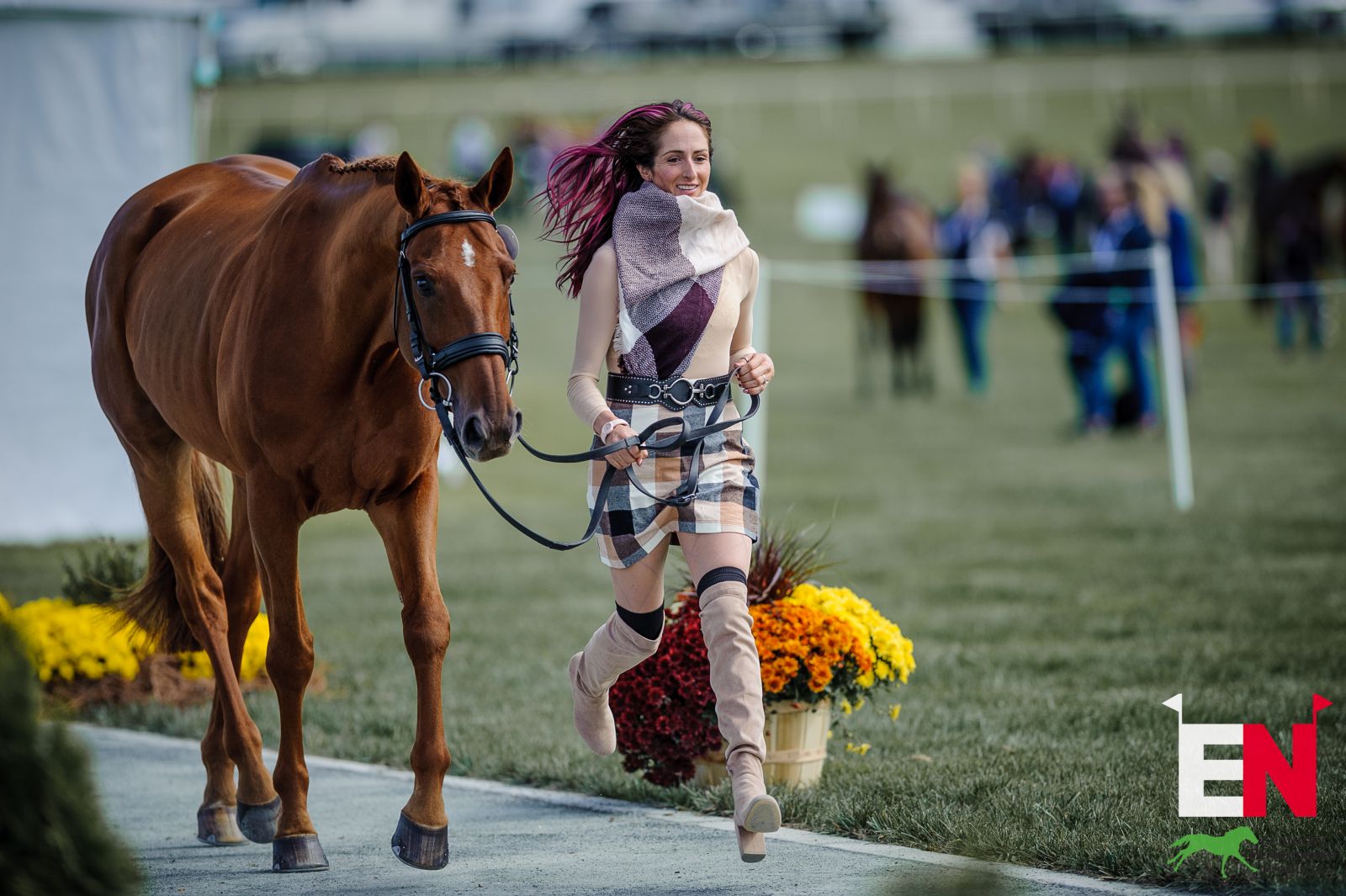 If there’s one thing you need to know about me, it’s this: I am a die-hard Josie and the Pussycats apologist. I truly believe that the 2001 Rachael Leigh Cook-led ensemble piece is a work of fine art; perhaps one of the greatest film ventures of all time, like Casablanca or Gone With The Wind. This is a hill I will die on, very happily. Josie and the Pussycats awareness is, I think, the mission I was put on this earth to fulfil. And in the year of our lord 2022, I do believe that Jennie B has joined my cause.

First, there was her outfit at Kentucky this spring, which might have been my favourite trot-up outfit of all time. Like many riders, she came out in head to toe Holland Cooper, but instead of wearing the British brand in the Kate Middleton way, she punked it up, pairing a cropped tartan blazer with a pair of skin-tight leather trousers and a heeled ankle boot, looking as though she was ready to pick up a swoopy-fringed boy in the back of a Hot Topic and then maybe snog him in a mosh pit or something. Today, she went full Punk Rock Prom Queen, pairing a Sunday school skirt and scarf combo with a very tarty boot and stocking situation. I cannot explain to you how intensely I intend ‘very tarty’ to be a compliment.

The piece de resistance? That newly pink mane of hair, which says “look, I could do things your way. I could be the president of the National Honour Society. I could sell bon-bons for French Club in my free period. Or — and just bear with me for a moment here — I could start a thrash band with a name like ‘The Riotous Womb-Sluts’ and I could also, maybe, at a push, kick your ass.” 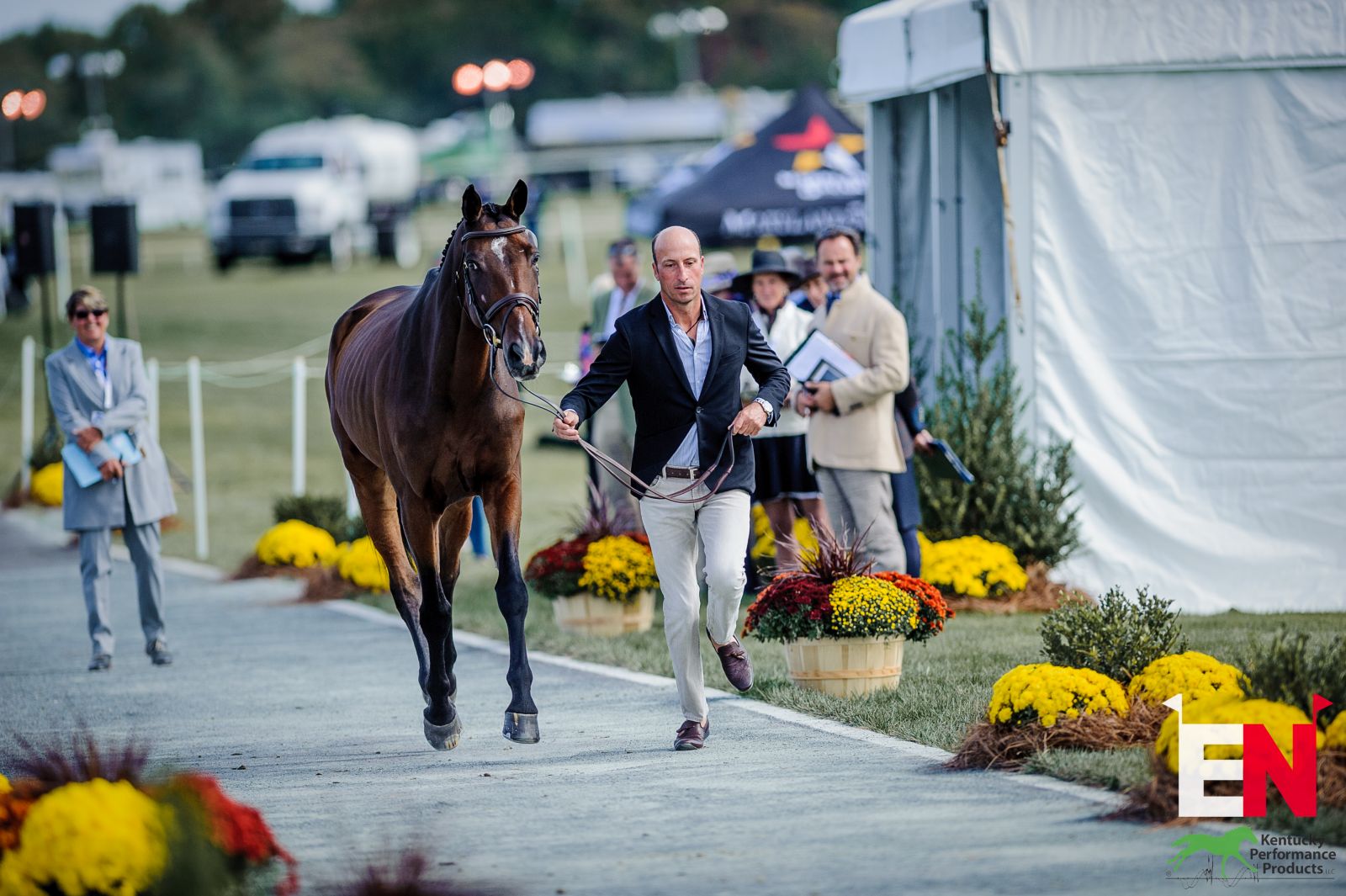 New Zealand’s Tim Price can do what he likes, really, because he’s the World Number one, and I’m pretty sure that grants you diplomatic immunity from internet piss-takes. HOWEVER. He’s been a very, very rogue boy here, and has brought forward a look that I am never quite sure about. That look? A sockless loafer situation; very trendy, admittedly, among the slim-trouser-and-quaffed-hair chaps of the UK scene, but one that always, regrettably, makes me think a bit too much about the practical logistics of the thing. I just know it smells extraordinary in those loafers, unless, of course, Tim is hiding a secret sock in there. Then, of course, I have to take a moment to picture Tim wandering around in those cheeky lil’ toe condoms, and I’m honestly not sure which option makes me feel more uncomfortable. Perhaps Tim, too, is shilling feet pics on the side. Perhaps EN just started the rumour of the century. Perhaps.

The Golden Chinch for Egregious Flirtation with the Colour Wheel 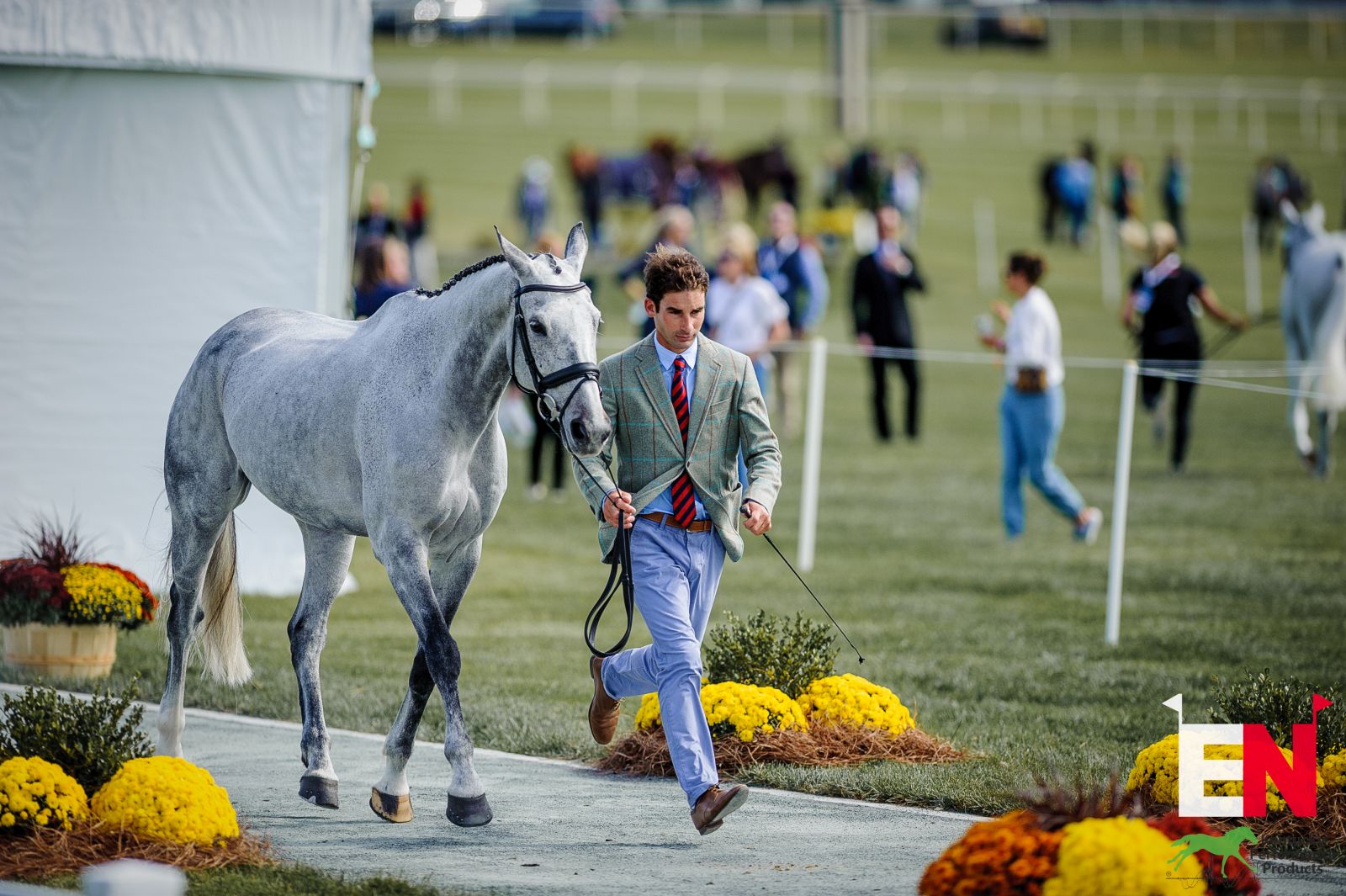 Look, there’s a lot of blues going on here. A real spectrum of blues. The problem is that none of them are even in the same family. We’ve got a periwinkle trouser, an aqua windowpane, a baby blue shirt, and a Dennis the Menace tie that harks back to the days when the cool thing to do was either have your school-issued tie six inches too long or twelve inches too short. It’s a chaotic ensemble, and one that only a Frenchman who’s posed for Givenchy could pull off. Astier allez-ed les bleus, for sure, but perhaps he allez-ed les bleus too close to the sun.

The Golden Chinch For Refusing to Fetch the Milk, MOM 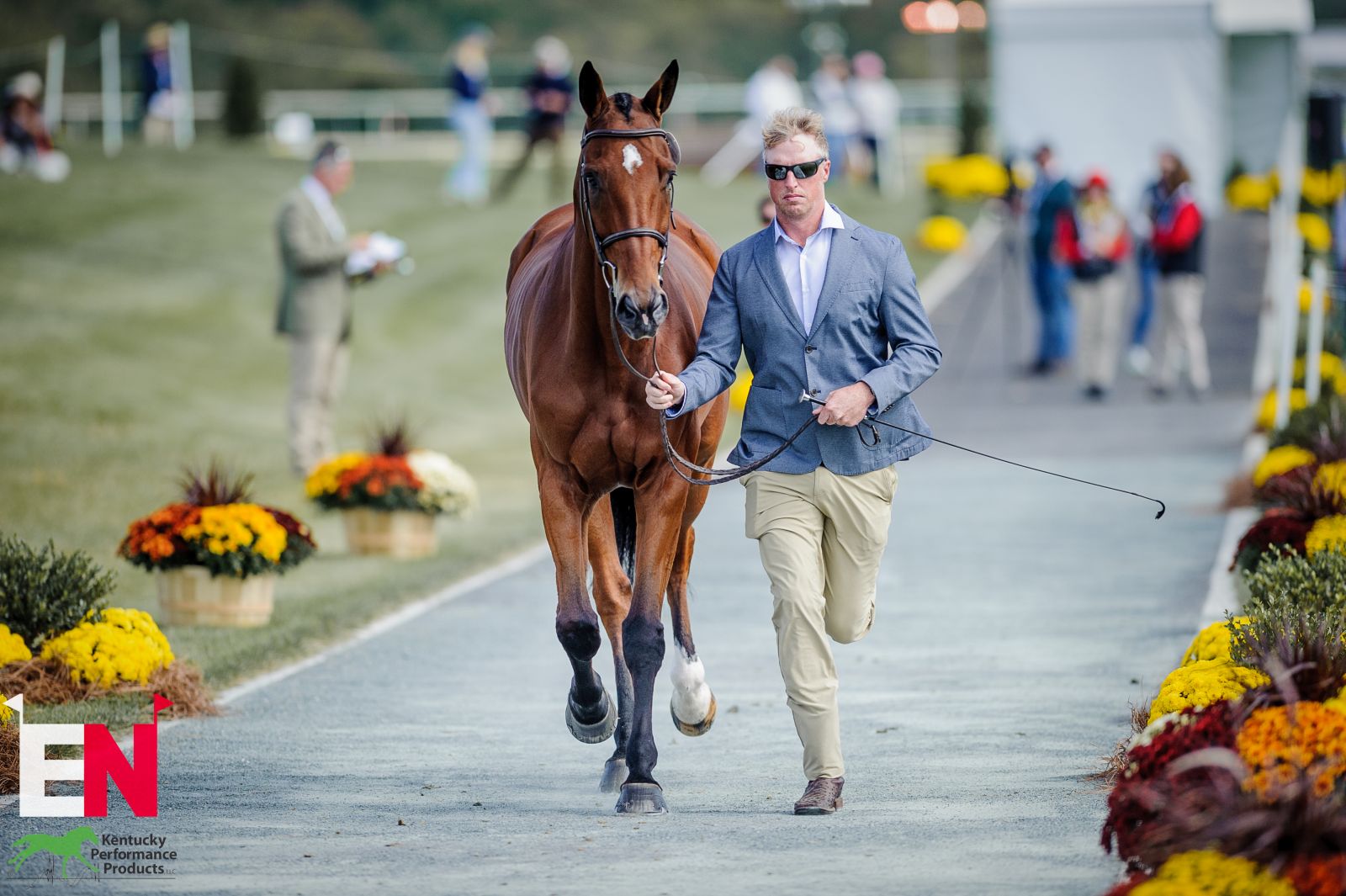 Doug Payne is a sharp dressed man, don’t get me wrong. But something about his whole vibe here tells me that his mom just got home from the local Piggly Wiggly and shouted up to his bedroom that she needs some help bringing the groceries in, right as Doug was about to hit an all-time kill streak in a fierce COD blast-off. Last time he fobbed her off she took his X-Box privileges away, so he’s going to do it this time, but he’s also going to make sure she knows just how unhappy he is about it. Don’t worry, Doug. She got you a can of Monster for your troubles, and that sweet, sweet rage nectar will ease your pain and fire you up for even more wanton machine gunning. Go pwn those noobz. Pwn them hard.

The Golden Chinch for Actually Just Legitimately Nailing the Brief 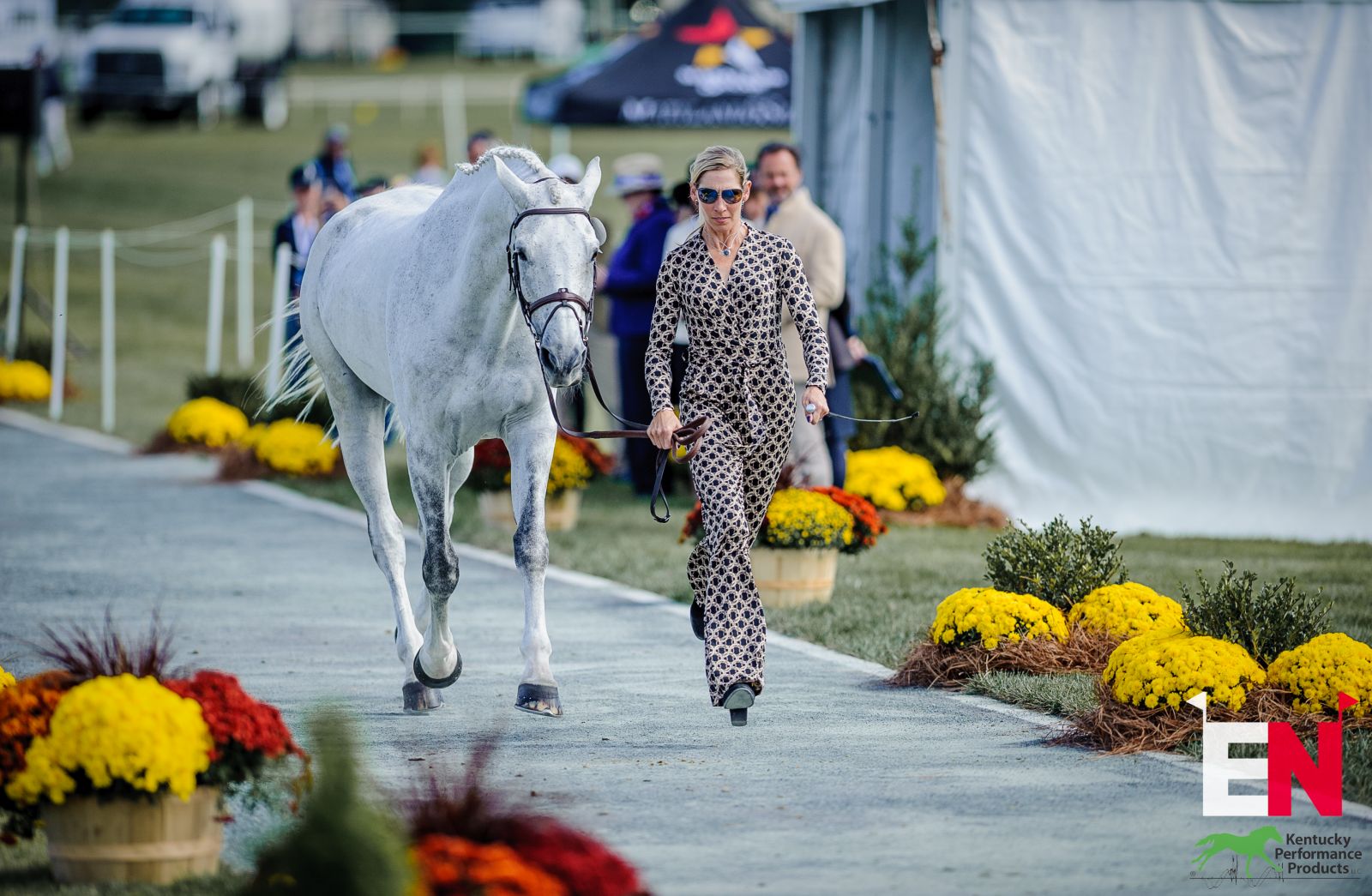 I know I’m here with one mission, and that is to gently lampoon, but truly, I have nothing funny to say about Liz Halliday-Sharp’s smart, flattering, flared jumpsuit. It’s giving Studio 54, but on one of the rare nights in which Bianca Jagger didn’t ride in naked on a horse. Liz consistently rocks some great looks for trot-ups, but this one wins the prize for her best yet, and the look of the week here at Maryland. Go forth and conquer, LHS.