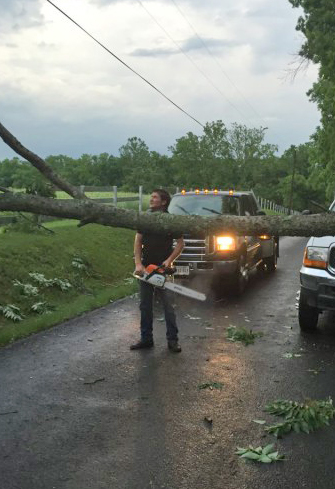 Kurt Martin to the rescue. Photo via Sara McKenna.

We had some crazy storms roll through the other night up here on the East Coast, and downed trees come with the territory. Three star rider Kurt Martin came to the rescue of a trapped horse trailer in Virginia, busting out his trusty chainsaw and proving that he can do more than just sit pretty on a horse. We applaud your woodsman skills, Kurt, and are all eagerly waiting for your clinic on how to dodge falling trees.

Samantha Clark is on the grounds at the Equi-Trek Bramham International Horse Trials to bring us coverage here on EN all week. Lauren Kieffer and Veronica and Katherine Coleman and Courage Under Fire are in the CCI3*, and Caroline Martin and Quantum Solace are in the Under 25 CCI3*. Stay tuned for Samantha’s excellent coverage.

The FEI announced yesterday that the U.S. has been awarded a Nations Cup date for eventing, but the venue and date have not yet been revealed. Great Meadow confirmed to EN that they were the only venue to apply for a date, so that’s likely the venue. Now we await the date and official announcement. [FEI Bureau Meeting Report]

The Chronicle of the Horse is also following the purple movement. In honor of Seema Sonnad, the purple broke out in force at Plantation Field this weekend, and there are reports of purple being worn all over the country. I felt my own purple shirt was a little too pink, but I was reassured that it was, in fact, a shade of purple. #colorblind #becauseofSeema [Plantation Field Goes Purple]

The Pas de Deux of the century will be held at CSIO Mannheim. In part of the centenary Nations Cup gala ceremony, dressage super stars Charlotte Dujardin and Isabelle Werth will be performing a Pas de Deux. While there is no word on which horses will take part in the test, it is sure to be a highlight of the July 18 gala. [Dressage Greats Perform Pas de Deux]

PRO made sure to recognize the hard work of grooms at Bromont. This year, PRO awarded the PRO Equine Management Training Center Groom’s Award, worth $200, to Anne Marie Duarte, who grooms for Selena O’Hanlon. [Anne Marie Duarte wins PRO award at Bromont]

Not going to the Pam Ams?  Go to Fitch’s Corner HT in Millbrook, NY on July 17-18 for a great competition with lots of frills.  New is the $2,000 Novice Masters Challenge for riders 40+.  Derek di Grazia will create the championship style XC course with Marc Donovan for Stadium.  The stadium jumping will be held during the popular Blue Jean Ball on Saturday night.  Boogie over the fences with famed DJ Flo from New York.   Fitch’s has the best Market with fashion and gifts for home as well as products for horse and hound. [Fitch’s Corner]

This week in Horse & Hound’s Numbers: There must have been something in the water over at Berriewood in Great Britain, as twenty-two riders forgot where they were going in dressage. [Eventing in Numbers]

This week in Behind the Stall Door: RF Demeter, recent winner of the CCI3* at Bromont, is next up in this COTH series. Demi has a number of other nicknames all related to Goldfish thanks to her short term memory and physical looks. [Behind the Stall Door]

Andreas Dibowski has sold 3* horse Hans Dampf to a rider in the U.S. Andreas announced on his Facebook page on Monday that he had sold Hans Dampf, a 9 year old Oldenburg gelding, to a rider in the United States. Hans Dampf won the Malmo CIC3* in his first attempt at the level last August and went on to place second at the Waregem CIC3* and ninth at Boekelo CCI3*. Most recently, he was fourth at Sopot CIC3*. While the U.S. rider remains unnamed, it’s only a matter of time before we see this horse out competing on American soil. [Andreas Dibowski Facebook Page]

SmartPak Product of the Day: Hanging water buckets at shows is just a pain. The twine never lets the buckets hang perfectly even and making sure the knots are secure is time consuming. Enter the Loop-De-Loo, the best bucket strap ever. Just wrap around the stall bars and through the loop on the end and voila! Perfectly hung buckets. I’ve also used these to hang cross ties, stall guard, and blanket chains. [SmartPak]

American Pharoah was awe-inspiring on Saturday, and I will never forget watching that race for as long as I live. But the phrase Chic Anderson uttered while calling the Belmont in 1973 during Secretariat’s incredible win never fails to raise the hair on my arms whenever I hear it.