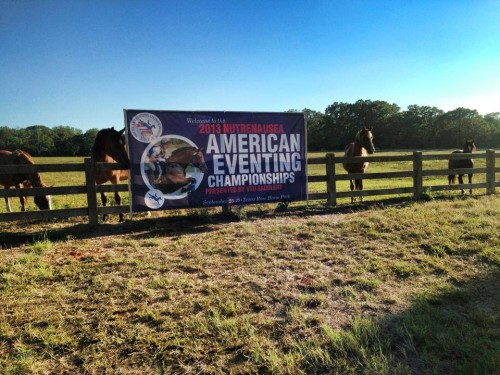 The USEA has arrived! Photo courtesy of the USEA Facebook.

Alright everyone, the countdown is almost over: ONE MORE DAY until competition kicks off at the Texas Rose Horse Park for this year’s American Eventing Championships. If you missed Sally’s excellent preview post titled “Top 10 Reasons to Get Pumped for AECs” make sure to check it out to find out about all the cool things that will be happening this week (besides the competition, which we already know will be fierce). One cool perk that bears repeating is that AEC (and EN!) sponsor FLAIR will be handing out free nasal strips in each competitor packet this weekend. The USEA has put together a great resource webpage that has all things AEC in one place, and make sure to keep checking EN for the latest reports and competition updates. Go (American) eventing.

Calling all Area II eventers: Morven Park needs more volunteers to jump judge at its October 5-6 event. This is a huge event that is the traditional final run before Fair Hill International for many pairs, and most of the East Coast’s top riders have already entered. Volunteer and snag a front row seat for the intense competition! [Morven Park]

There has been a schedule change for the October 5-6 Roebke’s Run Horse Trials. Originally it had been posted that all dressage would run on Friday, however now only CIC1* dressage will run on Friday afternoon. All other competitors will now do dressage on Saturday. In addition, the organizer has waived late fees and will accept entries until Monday, September 30. [Roebke’s Run]

William Fox-Pitt is backing Jock Paget to win the Rolex Grand Slam after Paget’s Burghley victory. According to Yahoo Sport, Fox-Pitt said “He needs to enjoy the moment. It doesn’t happen for many riders but he has brought that horse on so well and I take my hat off to him.” Paget is the first rider to win Burghley and Badminton in the same year on the same horse in 24 years. [Yahoo Sport UK]

Daniel Stewart’s sports psychology tip of the month: Get comfortable outside your comfort zone. Daniel notes that our greatest learning opportunities may lie outside of what we feel comfortable with, and we should embrace the feeling of moving outside what we are familiar with. Mistakes will happen, but they should be seen as learning opportunities. Click to read his full explanation. [US Eventing]

The Supreme Court in Connecticut will soon issue a ruling declaring whether or not horses are a “naturally vicious” species. A lower court found that horses are naturally dangerous, and the case is now on appeal to the highest state authority. The appeal stems from a 2006 case that arose after a horse at a farm bit a young child on the cheek. If the “naturally vicious” opinion is upheld, there could be serious consequences for the state’s horse industry and on the ability of equine owners to procure insurance. [Horsetalk]

This week on the Eventing Radio Show: Boyd and Sinead join Samantha and Jess for a Plantation Field wrap-up. In addition Jess weighs in on Clark’s exciting win with Universe in the Advanced division in Allerton last weekend. The pair is gearing up for the Pau CCI4* later this fall. [Eventing Radio Show]

Today on the SmartPak Blog: A multivitamin makeover. One of SmartPak’s signature supplements, SmartVites, has been completely revamped and released in four different formulas better tailored to individual horses. Click to read more about the supplement’s content and new makeup. [SmartPak Blog]

Bonus AEC Fun: Remember Elisa Wallace’s amazing freestyle performance with her mustang Fledge which won them the grand prize at last year’s Extreme Mustang Makeover? AEC attendees will have the chance to see her perform a new freestyle with her new mustang partner, Rune, on Thursday evening.  And as if that isn’t enough, Elisa will also be riding Corteo and Ultimate Decision in the actual competition this weekend. Check out a preview of her freestyle below.