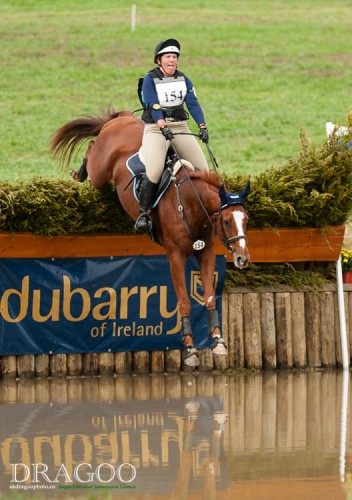 Win the War and I into the water. I have my game face on to scare away the water gremlin. Photo by the amazing Amy Dragoo.

Bug and I made the trek up to beautiful Unionville, Pa., for our first visit to the Plantation Field Horse Trials in 2008. I was excited for us to run our first CIC* together in prep for the full format CCI* at MidSouth later that fall. This was the last year that the CCI* full format counted in the FEI, and I was excited to be a part of history.

Bug and I put in one of our better dressage tests, and then he rocked around the cross-country course, adding only a handful of time penalties to our score. We were sitting in ninth going into show jumping. I was beyond elated. About an hour and a half after we completed cross country, Bug started acting funny. He had always been a super healthy horse with no issues, so I knew immediately that something was wrong. His vitals were all normal, so the vets didn’t believe that there was anything wrong, but I keep reiterating to them that I knew my horse very well and he was colicky.

Due to the strictness of the FEI rules, there was only so much we could do legally to treat him. Nothing seemed to work, so I decided to withdraw him to be able to give him the treatment he needed to help. I was praying that once we gave him Banamine, everything would be fine. Unfortunately, it didn’t end up that way.

That afternoon, Bug and I took the short drive from Plantation to New Bolton. Again, when I got there, the vets did not believe that he had anything major going on. They kept him there and sent me on my way with the hope that it was something medical, as they did not think he was a surgical case. 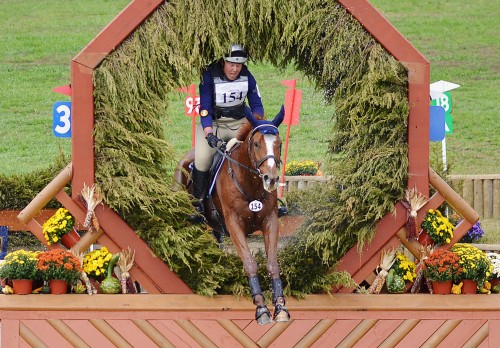 Bug through the keyhole. Photo by Jenni Autry.

Again, no such luck. After I left, his vitals started to change a bit, and the vets decided exploratory surgery was the answer. It turns out that Bug had a displacement of his colon. It was as minor as colic surgery can be, but without the surgery, he would not have made it. The vets complimented me over and over for knowing my horse so well and ignoring what everyone else was telling me.

My first weekend at Plantation was one of the most traumatic experiences of my life. After this experience, I had been avoiding Plantation like the plague. I do not tend to be a superstitious person, but I found it very hard to take Bug back there. Finally, this year, I decided enough was enough, and I was going back. I am very glad that I did!

Though there was controversy surrounding the cross country on the CIC3*, I thought the rest of the event was pretty super. I couldn’t believe how much it had changed since I had been there five years ago — what a gorgeous venue and well-run event.

Bug and I did not put in our best dressage test. There was nothing horrendous about it; it just wasn’t up to par. I left a lot of points on the table that I could easily have picked up, which was very frustrating to me. However, I quickly forgot about Friday when Saturday morning rolled around. I had come to take back my missing jumping mojo.

Marc Donovan always designs very influential show jumping courses. One really has to ride forward in good balance to get them done. I walked the course and I had a plan. I had my game face on, and I was ready to “Win the War”!

Bug and I jumped around double clear to a round of applause. The course felt amazing. Bug was jumping great, and I was on top of the world. We ended up being one of 12 double clears in the 51 horse division. It felt so great to have so many people come up and compliment us on our round, as I have been working so hard at home to put all of the pieces together.

Going into Sunday, I knew that I had to ride forward to the fences, and I was determined to shoot for the time. I was going to take my game face from yesterday along for the ride. Bug flew around that course like it was child’s play. He answered each question with ease, and I just kept kicking.

I had an idea that people were having issues at the water. I decided that once I was on my line in, I was just going to keep Bug in front of my leg, but let him sort out how to drop in. He sailed through the whole thing with no problem. We ended up going clear and only six seconds over the time. I was elated. In fact, I am still having problems wiping the silly grin off my face when I start thinking of our jump rounds this past weekend.

We ended up finishing 18th out of 51 in the divison, moving up from 45th after dressage. I am pretty proud of a top-20 finish in such a competitive CIC3*.  This horse of mine is truly a phenomenon. I must also say that I am pretty proud of myself for putting on my big girl britches and riding like I know I can. 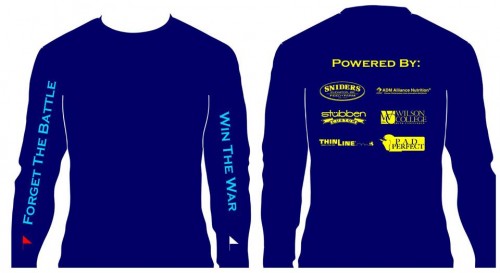 The newest in the "Forget the Battle, Win the War" line of fundraising T-shirts. Order through the end of September!

Also, for those that have been looking for more Win the War wear, I am selling a new long sleeved T-shirt this fall to help support all of Bug’s upkeep for the competition season. If you are interested in ordering, you can do so with PayPal here on my site. I am taking orders through the end of September. I would love to see Bug fans in his shirts scattered around Fair Hill this year! We will be working hard between now and Fair Hill. Bring on the CCI3*.

Forget the Battle, Win the War!