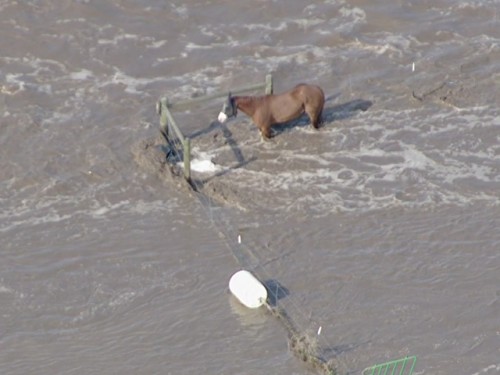 As everyone is aware at this point, Colorado has been suffering through some of the worst flood damage on record when the state received well over their yearly rain allotment in a few short days, resulting in massive floods affecting hundreds of humans as well as livestock. We’ve had reports from eventers in areas that are completely underwater — and now awaiting a plague of locusts — as well as testimonies from equestrians who haven’t fared as badly.

Now, the USEF has set up an Equine Disaster Fund in order to help the horse owners in the flooded areas who have been devastated by the damage of the water. Thousands of horses are stranded across the 4,500 square miles of ruined terrain. Many horse owners and farms have a great need for hay and feed for the horses that they have rescued thus far, and this must be air lifted in to them.

Having originated during the aftermath of Hurricanes Rita and Katrina, the USEF Equine Disaster Relief Fund was formed to help ensure the safety and well-being of horses during trying times. Money donated to the USEF Equine Disaster Relief Fund is used to prepare for disasters and assists equids of any breed who are victims of disasters including but not restricted to hurricanes, tornadoes, floods, blizzards and fires.

Money donated to the fund is held by the USEF in an account restricted for this purpose. “It is important to understand this fund is a dollar in and a dollar out,” says USEF Chief Executive Officer John Long. “Nothing is withheld.” Any donation to the USEF Equine Disaster Relief Fund is a timely and efficient benefit for horses and horse owners.