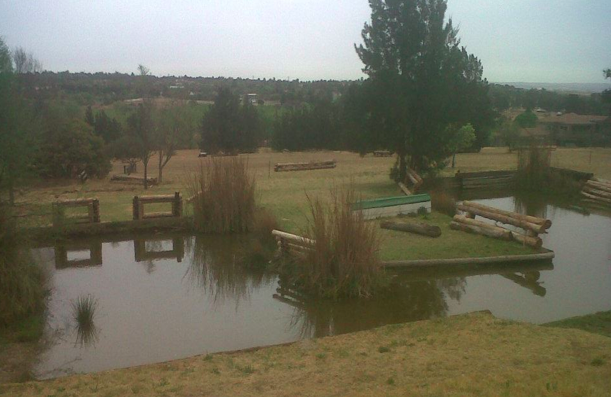 The water complex built for the Polo International Horse Trials.

So while all of our American riders are gearing up for the big fall CCIs this weekend, another fall CCI is making its inaugural debut: The Polo International Horse Trials in Kyalami, South Africa.  Polo South Africa is the title sponsor of the event, which will feature a three star and a two star officiated by well-known FEI officials Andy Bowles and Harry Payne. Clayton Fredericks will also be on hand to host course walks and share his Olympic experiences with the South African riders, who are aiming to qualify for the 2014 WEGs. Billing eventing as the “Iron-Man of Equestrian sport,” the marketing team is working hard to draw the big crowds and based on the photos on the event’s Facebook page it looks as if they have built quite a course. Click to read more about the festivities and see photos of the course under construction. Good luck to all of the South African eventers who will be competing this weekend! [Polo International Horse Trials Facebook] [Event Website] [Provisional Schedule]

Australian eventer Chris Burton won the CIC* at Ardingly Horse Trials on Nobilis last weekend in South England. The pair finished on their dressage score of 41.4, moving up from third to first over the course of the weekend. American Elisabeth Halliday-Sharp led the division after dressage, after riding a “cracking dressage test” aboard Endymion Entrechat and earning a 38.5. Unfortunately her weekend did not end well and she finished in 44th position, but here’s to hoping the pair’s dressage performance foreshadows future success. [Weekly Times Now]

Zara Phillips has not stepped out of the horse world completely during her pregnancy. Last weekend she came out to support protégée Aimee Aspinall, who rode Zara’s mount Disarm at a horse trials held at Warwick College. Zara sported a good-looking Musto vest, as Musto is an equestrian clothing company she helped launch. If you would like more info about what Zara wore to watch the ride and see photos, you can click the link to the gossip site this story came from. [Hello Magazine]

Looking to refresh your fall wardrobe? SmartPak blogger Melissa Hamlet put together a list of her fall fashion picks. From new boots to under-layers to fleece coolers, SmartPak clearly has you covered (get it??) through the changing seasons. My favorite is the Rhino Fleece Dress Sheet, both because it looks snazzy and is on sale. Also did you know SmartPak now sells Under Armour products embroidered with the SmartPak logo? [SmartPak Fall Fashion]

In light of the recent Colorado flooding, the USEA posted a timely press release about preparing for natural disasters as horse owners. Put together by American Horse Publications, it recommends making sure every horse is permanently identified with a microchip, tattoo, brands, or photographs and that a luggage tag should be placed on a halter reserved for emergencies. It includes other helpful tips about evacuation plans and preparation, and is a good read in the spirit of preparation. [USEA]

A new study has found that pastured horses stay fit. The study looked at two groups of horses over a two-week span, and found that horses on stall rest lost fitness while horses who were pastured maintained a fitness level similar to that of stalled, exercised horses and had greater bone mineral content at the end of the two weeks. The lead researcher concluded that “letting horses be horses—as in putting them in their natural setting—allows them to maintain fitness better, which may make their transition back to competition easier and likely more successful.” [The Horse]

Today’s video comes to you courtesy of Horse & Hound, and it was featured as one of Horse Nation’s “Oh Crap” Moments of the Day. After watching it, I can’t say I blame the FEI for eliminating one of the jogs from the CIC format…