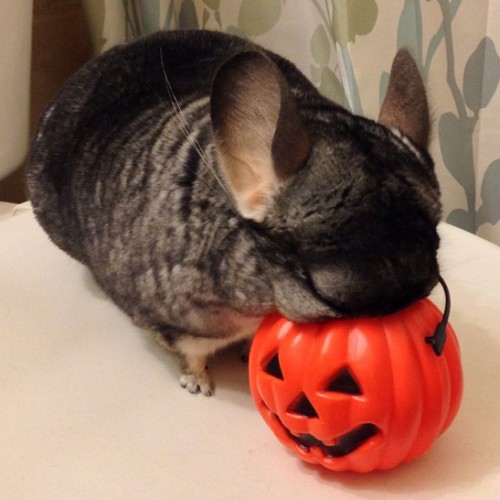 This is how the EN chinchillas are eating their Halloween candy too. Photo via Buzzfeed.

So apparently the EN chinchillas are not the only computer-savvy members of the species. Buzzfeed (but seriously, what other website would pay someone to do this) managed to find SEVEN chinchillas who have their own Instagram accounts. So much cuteness awaits- click to find links to their accounts and see a lot more photos. [Buzzfeed]

Check out the USEA’s coverage of day 1 of the William Fox-Pitt Clinic. According to the USEA report there were roughly 200 auditors in attendance to watch the proceedings, and William had a lot of wisdom to impart. Yesterday riders focused on flatwork and poles divided up by level in semi-private groups. From four- and five-year-olds to advanced campaigners, it sounds like all of the horses improved during their lessons. Click to check out specific advice William gave to riders. [USEA]

The Telegraph reports that Princess Haya is under growing pressure to resign as FEI President because of suspicions of drugging and abuse surrounding her husband’s endurance operation. According to The Telegraph, at least one national federation has already asked Princess Haya to resign due to her alleged conflict of interest. The FEI denied this as its three-day general assembly began on Tuesday. Last week in the lead-up to the meeting US endurance rider John Crandell wrote an open letter to the FEI, “alleging FEI corruption and describing a ‘cancer’ of drug abuse in the Middle East.” [The Telegraph]

William Fox-Pitt has been awarded the Tony Collins trophy as highest ranking British rider, though Andrew Nicholson has more British Eventing points. Got that? The Tony Collins trophy is awarded annually to the British rider with the most British Eventing points, and William is the lucky winner for the fourth year in a row. Andrew has actually been #1 in the British Eventing year-end rankings since 2010, but is ineligible for the trophy as he rides for New Zealand. The pair’s rivalry goes back much farther than 2010 though, as they have been the top two riders in Britain since 2000 with only one exception: in 2009, when Oliver Townend was the highest scoring rider overall. [Horse & Country]

EventingTrainingOnline.com, the official online education partner of the USEA, will be at Equine Affaire in West Springfield, Mass., this weekend. Check it out at booth 506 in the Better Living Center, where you can sign up for your 30-day free trial. Or go use coupon code EAmass13 for 50 percent off the first month of membership. [EventingTrainingOnline.com]

The Chronicle featured Irish eventer Tim Bourke, who just recently finished in 8th place at his first CCI3* at Fair Hill with Luckaun Quality. Tim found “Obie” as a three-year-old in Ireland and brought him across the pond when he took a position with Sharon White. The pair ran their first Advanced in August at Millbrook and have been on quite a roll this fall, finishing on their dressage score of 58.6 at Fair Hill. [COTH]

This week on SmartPak’s “Ask the Vet:” keeping ulcers at bay. Dr. Lydia Gray discusses how to deal with switching a horse from grass to hay without causing undue stress on the digestive system, including solutions like feeding alfalfa hay and limiting grain for horses not in heavy work. She also suggests several supplements that help maintain healthy digestive systems. [SmartPak Blog]

Best of Blogs: Doug Payne has arrived in Aiken

Today’s Dose of Adorable: A very rare pair twin foals were born last week at Holstein Park, a Warmblood stud operation in Australia that bred Chris Burton’s London mount Holstein Park Leilani. Check out a video of them and an interview with their breeder, Philippa Creamer.