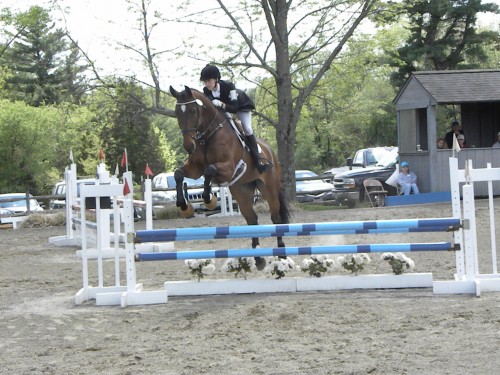 The Beast at King Oak this spring.

I was about 14 years old when I had my very first horse. He was a purebred Connemara gelding named Towerhills O’Ryley, and my family and I bought him as an unbroke 2 year old. He turned out to be a pretty awesome little horse, even though at the time he was an inappropriate choice. Nevertheless, one hot summer afternoon, all of us girls at Hitching Post Farm were told that Denny Emerson was coming to the farm to teach a clinic.

We were all so eager. None of us had ridden with him before, but we certainly knew who he was and could not wait for his arrival. At the very last minute, I was informed that my Connemara was too green for this lesson, and I realized I couldn’t really afford to attend the clinic. I sort of assumed I would have the money, and I sort of assumed my horse would be ready. No such luck.

At the end of the clinic, Rozo, the owner and trainer at the time, invited Denny and May to come up to the barn and visit for a minute. She dragged me out of the stalls in the indoor so I could meet Denny. I remember feeling so embarrassed. I was dripping with sweat and I was so shaken up that I could barely say hello without bursting into tears. I went back to finishing chores only to discover that Denny ended up donating all the money from the clinic that day back to Hitching Post Farm. If only I had known … 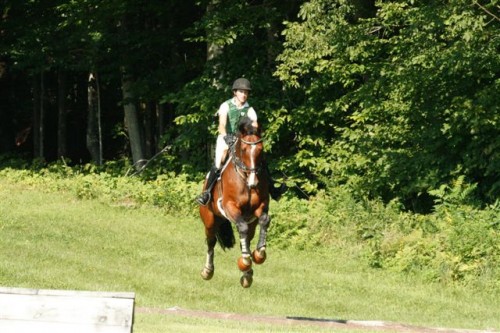 Skybreaker loping over the ditch at THF this summer

This isn’t supposed to be a pity party, but rather a wakeup call. Eventing represents one of the most expensive sports out there. I have always wanted to ride horses and nothing else. This is the world that I know, and this is the world I belong in. It’s unfortunate that the cost of living, the cost of fuel, horse feed and entries are so outrageously expensive.

It’s unfortunate that you can spend a grand total of $650 at one single event and all you could win is a measly ribbon and maybe a saddle pad. There’s barely any money in this sport, and yet we can’t stay away from it. We are obsessed with this sport, and we disregard the fact that all we do is spend and rarely receive.

I have always been that kid, that teenager and that adult that had to work inside AND outside the barn. I was a waitress for years. I used to drive an hour to Woodstock five nights a week, work until midnight and get to the barn by 7 a.m. I have catered with several different companies. I worked in sales for a local publishing company, and now I work for about six different online equestrian companies where I blog and handle social media.

I have never had the luxury of not working, and I have never regretted one second of my life. I have had to work hard to get to where I am. Nobody ever handed anything to me on a silver platter, and nobody ever had a blank checkbook waiting for me either. I want to encourage all those event riders out there who literally lose sleep at night dreaming of riding and competing who do not have much money.

I want to tell everyone who has struggled with money and horses that there will come a time where you will reap the benefits, but only if you stick with it. Don’t ever be embarrassed because you are riding a $500 Quarter Horse while your friends are riding $30,000 Irish Sport Horses. Don’t ever allow money to dictate your life or sway your dreams, but you have to keep working hard if you want results.