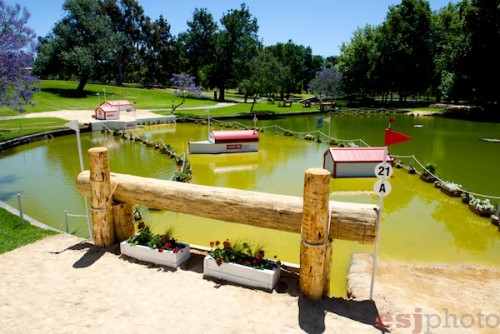 Good morning EN! After a dramatic lead-up, the Australian International Three-Day Event officially begins today with the first horse inspection. The event will feature a CCI2* and CCI4*  division, both of which present today. Tomorrow the CCI2* pairs will do dressage, and the CCI4* division begins competition Friday. The four star division is considerably smaller than what we see at the northern hemisphere four stars, which is understandable given how long it takes to fly to Australia. All of the 26 entered pairs hail from Australia or New Zealand, with the exception of Great Britain’s Charlotte Price who will be riding Kevin McNab’s Kinnordy Gambia.

According to Horsetalk, AI3DE course designer Wayne Copping plans to attend the event just a week after undergoing bypass surgery.  Luckily his job appears mostly taken care of, as Mike Etherington-Smith was on grounds in an advisory role and had walked the course with Wayne before his heart attack. As Wayne underwent surgery, Mike and was able to fill in to complete the last minute preparations of the course that Wayne was unable to do. But Event Director Gill Rolton seemed pretty positive that Wayne would make the event, “even if he has to be driven around in a golf cart.” Given what we know of the ex-Aussie eventers in the US, this kind of grit isn’t exactly surprising. [Horsetalk]

The USEF posted a press release update on the 2013 Developing Riders/Eventing 25 Program Riders and declared the redesigned program a success. Many of the selected riders had an extremely successful year, most notably Megan O’Donoghue and Pirate, who finished in 12th place at Rolex and 11th at Fidelity Blenheim Palace International Horse Trials in England. According to the release, the program exceeded coach David O’Conner’s expectations. “Two riders going to Europe, other ones winning two-stars, and others doing well in three-stars. To me it was a very successful program for this year,” he said. Click to read more updates on the other riders and their thoughts on the program. [USEF]

This week on the Eventing Radio Show: Laine Ashker gives a full report on the William Fox-Pitt clinic. Laine rode her homebred Calling All Comets in the WFP clinic held last weekend at Morningside Training Farm in Virgina, and this week she joins hosts Jess and Samantha to discuss what she learned. Amateur eventer Kathleen Sullivan also joins the conversation to discuss what she thinks of clinics, as an amateur rider, and Jess and Samantha break down winter training schedules. [Eventing Radio Show]

Do you find yourself battling blanket rubs all winter? SmartPak’s (and the wider eventing world’s) resident grooming expert Emma Ford can help: check out this blog post dedicated to helping you end the issue of hairless shoulders. Emma recommends using a hair-growth formula like Super Gro to mitigate hair loss and a towel or standing wrap on the chest closures to prevent pressure points. [SmartPak’s “Ask the Groom”]

Thinking about breeding your mare? TheHorse came up with a really useful list of all the expenditures you will face if you do so. There are a lot of hidden costs beyond the basic stud fee and vet bills that really add up over time, and the post will  open your eyes to exactly how much it can cost to bring a foal into the world these days. [TheHorse]

Horsetalk asks: Are inflatable helmets the future of riding? Two Swedish designers invented a helium-filled inflatable cycling helmet as part of their master’s thesis at the Industrial Design at the University of Lund. Watch the video below to see the helmets in action. What do you think EN, will riders of the future be wearing these?