Just as everyone has diverse taste in music, riders have different taste in pump-up music. Start Box Jams plays homage to the songs that give us the courage to tackle cross country. Do you have some favorite start box jams you’d like to share with EN? Email me at [email protected] 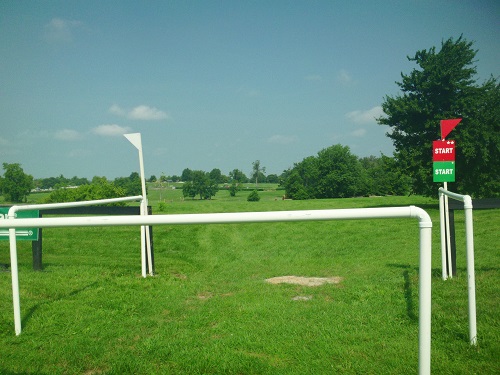 Where the longest five seconds of an eventer's life happens!

We all have songs that we can’t stand. Often, we declare those songs to be “pop garbage,” “talentless noise” or the “garbled shrieking of Norwegian goatherds.” We all have the finest taste and would never stoop to enjoying such terrible music. However, the thing about start box jams, or gym jams or really any music that you use to get yourself in the right frame of mind is that sometimes you end up with things that you wouldn’t listen to normally. That’s how I ended up with all of these songs on my iPod. Really. As that guy from the Judge Judy commercial would say, “That’s my story, and I’m stickin’ to it.”

While bleeding isn’t advised, this song is awesome. Even though it’s more than 10 years old now, it still delivers a sense of urgency. Jimmy Eat World was one of the bands that helped to popularize emo, or what crusty old 80s/90s punks would call “second wave pop-emo.” (Please no essays or hate mail about real emo, Rites of Spring, post-hardcore, Jawbreaker, Dischord Records, Ian MacKaye, etc. I know.)

If you’ve played any video games in the last six or seven years, odds are this song is familiar. It appears in Madden 2006, Guitar Hero: Warriors of Rock, SingStar Pop Hits, Rock Band 3 and more. I particularly like the “surge and settle” sound the song has in places — a good audio reminder to use both the pedal and the break while out on course.

Panic! At The Disco: “Camisado”

This is one of my gym jams. When I am sweating and cursing on the treadmill and just hating life, I will hit the “power jam” button on my Jog.FM app and wham — this song floods my ears, and I can keep going. Note that this is the demo version of the song, which I feel is significantly better than the final version that they ended up putting on the album.