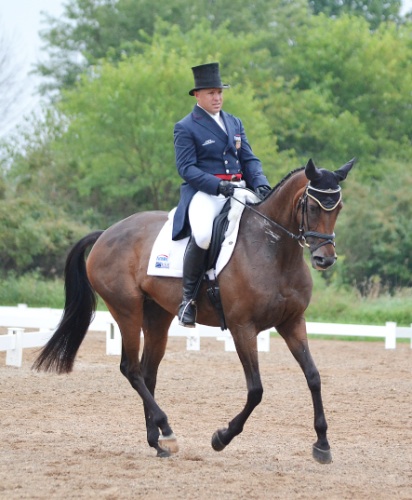 Buck and Petit Flower at Richland Park in August, photo by Jenni

Good morning EN! It’s finally that time of year: I only have one event to “preview” for you this week. With the USEA Annual Convention right around the corner, the 2013 show season is officially coming to a close. At the convention annual year-end awards will be presented to those riders who managed to make it onto the national leaderboards, and barring any unforeseen changes it appears that Buck Davidson has established himself head and shoulders above his competition this year. According to the official leaderboard on the USEA site he will take home the Rider of the Year title with 1,050 points, followed by Phillip Dutton in second place with 497 points. It’s definitely the year of the mare over on the Horse of the Year Leaderboard, where the top title  appears to be going to Raylyn Farms and Team Demeter’s RF Demeter, followed by R-Star and Gin and Juice who currently reside in the second and third places respectively. And finally if you’re already going through winter competition withdrawals, the provisional 2014 competition calendar is now online.  Check it out and start dreaming of warmer spring weather! [USEA Leaderboards] [Provisional 2014 Competition Calendar]

Looking for holiday gift ideas? Consider a book: Bit of Britain is hosting a virtual book signing event with both Phillip Dutton and Jimmy Wofford. For a short time, if you purchase a copy of Wofford’s Modern Gymnastics or Phillip Dutton’s Modern Eventing, Bit of Britain will send you a video of the author personally signing your book. Each book will only be signed by its author, and there is no extra charge for the signing. Click for more details on purchasing and order deadlines. [Bit of Britain]

This week on the Eventing Radio Show: Jonathon Holling and Jennie Brannigan. Jon and Jennie join hosts Nate Chambers and Joe Meyer for a group discussion of US eventing’s improving international success, the High Performance List, and the 2018 WEG. In addition Bruce Haskell from England joins in to discuss the indoor eventing competition at Stuttgart Masters. [Eventing Radio Show]

Don’t forget to cast your vote for your favorite homemade stirrup! We asked for you to make your own stirrup in order to have a chance to win a brand new pair of snazzy Amerigo irons, generously provided by our sponsor World Equestrian Brands. After receiving many submissions, the top 13 were picked and their pictures were posted yesterday. A reader poll will determine the winner of the prize, and voting is open until 12pm TODAY, November 27th. Vote now! [Make Your Own Stirrup Contest]

A sale to US buyer Daniel O’Hara set a new price record at this year’s Goresbridge Go for Gold sale. O’Hara came home with a seven-year-old grey gelding named Sacramento purchased for €65,000, a record high for Goresbridge.  A successful show jumper in his early career, the horse has also competed successfully through the two star level and looks to be quite a star in the making. As you’ll recall, several other very successful US eventing mounts also went through the Goresbridge sale as young horses: Trading Aces, Ballynoe Castle RM, and Mr. Medicott. Congratulations to Sacramento’s new owner! [Irish Independent]

Is Wellington the dark horse in the race to host WEG 2018? Horsetalk’s Neil Clarkson discusses why his initial thought that Bromont would be the obvious choice for the 2018 WEG may not be so certain after all. Clarkson points out that Wellington’s ability to manage the 5,500 horses that come through town every winter to participate in the WEF competitions will make it very attractive to the selection committee. The city’s application is being handled by Mark Bellissimo’s company Equestrian Sport Production, and Bellissimo has apparently already had Mark Phillips map out a route for a potential cross country course on nearby golf courses to demonstrate there would be adequate space. Click to read Clarkson’s full thoughts on the subject. [Horsetalk]

There have been important changes to both the USEF and FEI drug rules that will go into effect on December 1. The USEF has new rules prohibiting injections within twelve hours of a competition, though luckily hydrating IV fluids that are so popular with eventers at three day events will still be allowed. Antibiotics and Dexamethasone are to be the only other permissible injections. The FEI has added two new controlled substances to its Equine Prohibited Substances List:  Metformin, an anti-diabetic drug, and Levothyroxine, a thyroid hormone. Click to read a full description of the new rules and substances.  [The Chronicle]