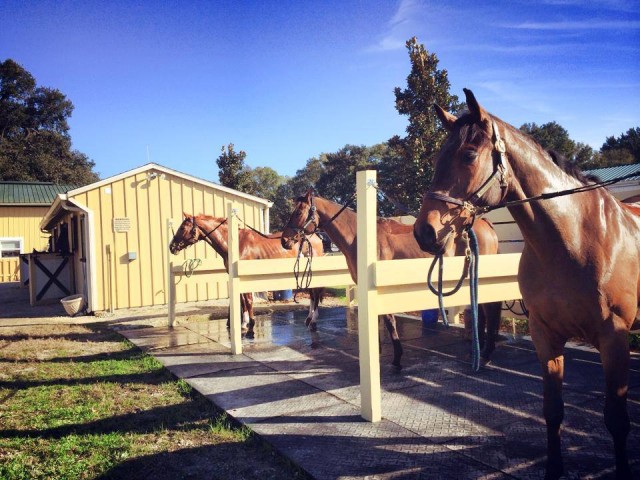 Good morning EN! The Ocala Eventing 25 training camp is underway at the beautiful Meredyth South farm this week, and as usual the social media gurus who run the USEF Eventing High Performance Facebook account are bringing you lots of updates and photos of the proceedings. To check out more photos of yesterday’s jumping session and Monday’s dressage work, check out the Facebook page. [USEF  Eventing High Performance]

WEG course designer Pierre Michelet has promised challenges for event riders in France. According to Horsetalk, Michelet has said there will be three water jumps, rugged and hilly terrain, and many narrow fences in Normandy (as one could expect from any four star course). “Many combinations will ask for precision and good balance, especially with the (steep) slopes,” Michelet told Horsetalk. [Horsetalk]

The Melbourne international three day event is being rebranded and relaunched as the Melbourne International Horse Trials (MIHT). The event, which features a CCI1*, CCI2*, and CCI3*, has taken on its new identity after Equestrian Victoria and  the private events company Nodding Horse Pty Ltd. announced a new agreement. MIHT will take place from June 6-9 this year and aims to be a celebration of both Victoria equestrians and the Queen’s Birthday weekend. The cross country courses will be revamped by designer Ewan Kellet. [Horsetalk]

Which horse and rider do you think had the best season last year? Don’t forget to vote for 2013 EN Horse and Rider of the Year. The polls will stay open until 10 p.m. EST Thursday night, and we’ll announce the winners Friday. [Vote]

This week on the Eventing Radio Show: Brazilian Olympian Ruy Fonseca and CA eventer Tamie Smith. Hosts Joe Meyer and Nate Chambers talk to Ruy Fonseca about his arrival in the US and his ride at the  Ocala X Extreme Jumping/Cross Country over the weekend. Later in the show Tamie Smith joins in to discuss West Coast Eventing and the recent Instructors’ Certification Program. [Eventing Radio Show]

Practical Horseman and EQUUS are awarding a 10-day trip for two to this year’s WEGs to one lucky winner.  And the best part is all you have to do to enter the contest is sign up for a free trial subscription to Practical Horseman. Click the link for more information about contest specifics and the details of the grand prize. [Practical Horseman]

Face the facts on joint supplements with SmartPak. SmarkPak has launched a new series on its blog called the “Horse Health Challenge” that will focus on educating readers about the facts of common equine illnesses and injuries.  This week the series addresses the issue of joint problems and the use of joint supplements. The first thing to know: joint care must start before there is a problem. [SmartPak Horse Health Challenge]

It’s time to vote for the Equestrian Social Media Awards! Not to toot our own horn, but Eventing Nation is a finalist for Best Blog and Best Social Network. Voting closes on Feb. 7. Go vote, Go Eventing! [ESMA]

Best of Blogs: Shamwari 4 made it to Aiken a couple weeks ago, and Boyd has wasted no time in getting to know him. He posted two videos of Shamwari schooling on his blog yesterday, including the clip below of Silva performing a beautiful extended trot. Click to see another short video of a jump school. [Boyd and Silva Martin]