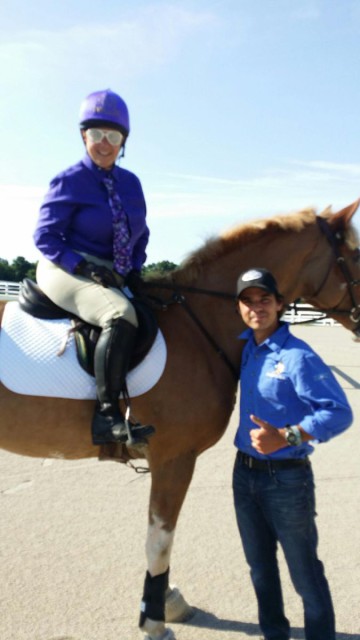 Jackie Gilbertson minding her melon in a Dom schramm clinic at Kate Chaddertons farm in MD. Thanks to Rhiannon Bosma for the photo.

Good morning EN! While it’s a bit of a slow weekend in terms of recognized competitions, Sharon White is hosting her annual Jump! fundraiser at her farm in West Virginia on Saturday. From the sound of things, it’s going to be quite the event- complete with a tiki bar stocked with free drinks, costume awards, and a new stick horse challenge. The mounted portions of the show include show jumping and cross country classes, and there will even be a horse stationed out on the cross country course to help the green beans who need a lead over the more scary fences. All proceeds will go to help Sharon fund her overseas competition trips. Click to find the entry form and more information about the weekend. [Jump! Entry Form]

Mary King tells the Exeter Express & Echo that she’s not quite ready to turn the business over to her daughter just yet. Her 18-year-old daughter Emily has already created an impressive riding resume, as she currently holds the under-21 national and Premiership League championship as well as a junior European individual silver medal. Mary told the paper, “[Emily] wants to be better than me so she is competing and working hard to go far in the sport. I have obviously been competing for a long time and I am waiting for that feeling when I want to just put my feet up. But it hasn’t come so far and I am enjoying it still and as long as I am fit and healthy and have good horses to ride I will compete.” [Express & Echo]

This week on the Eventing Radio Show: a Stuart H.T. preview and David O’Connor. Hosts Jess and Samantha are joined by Stuart organizer Heidi Vahue to talk about the upcoming event, and then David O’Connor joins in to discuss the USEA Safety Task Force. Dee Lee talks about her experience at the O’Connor Event Camp, and finally Dr. Lydia Gray from SmartPak talks about reducing colic risk factors. [Eventing Radio Show]

As we wrote yesterday, The USEA has posted an update on Amy Barrington’s recovery. Amy, a trainer from North Carolina, sustained a traumatic brain injury in September 2013 after falling from a horse while riding at home. According to the article she is doing very well, though still experiencing some issues with speech and vision. Click to read the whole piece and check out of photo of Amy riding again for the first time! [USEA]

Team USA won team bronze and an individual silver at the World Para Equestrian Driving Championships Sandringham over the weekend. The team consisted of Diane Kastama, Virginia (Boo) Fitch, and Bob Giles. Bob also won the individual silver medal at the event. Congrats to all! [Results]

Equine Disease Quarterly indicates that New Zealand has recorded its first case of neurological disease related to equine herpes virus-1 (EHV-1). The journal released a list of equine disease outbreaks reported to the International Collating Center in Newmarket, England, and other sources. The US also reported a significant number of cases of EHV-1 during the same period. [Horsetalk].

Scotland’s Blair Castle will host the European Eventing Championships in 2015, and they have put together an awesome new website for the occasion. The video below is their teaser for the event, and it features some really beautiful shots and slow motion takes. If you’re interested in attending the event, tickets go on sale in August! [Blair Castle 2015]