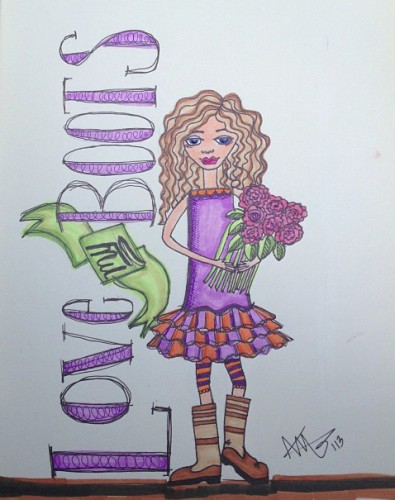 Congrats to Abbie Galie, the winner of Dubarry’s Rolex competition to win a pair of new Longford boots! Entrants were asked to take (or draw) a funny, creative picture to illustrate how much they wanted to own a pair of Dubarry boots, and Abbie drew the piece above, titled “Art Girl Loves her Boots!” Congrats again to Abbie, we are all very jealous of your cool prize. [Dubarry Announcement]

Badminton is upon us! The first horse inspection takes place tomorrow at 4:30PM (local time). From the looks of things it’s going to be quite a weekend with fierce competition. Andrew Nicholson and William Fox-Pitt are both going for the Rolex Grand Slam of Eventing, though Michael Jung is going to do his best to prevent either of them from taking home the title either this weekend or in the future. US riders Clark Montgomery, Colleen Rutledge, and Tiana Coudray are all competing as well. The Badminton organizers are doing a wonderful job keeping everyone updated on the happenings via the event’s official Facebook page, and make sure to keep checking EN for more updates and coverage. [Official Site]

Jock Paget has his eye on a win at Badminton. Currently sitting fourth in the world rankings, he has slipped below the radar while the world focuses on Nicholson, Fox-Pitt, and Jung. He will ride both his top mounts, Clifton Promise and Clifton Lush, this weekend which will be his first time to contest the course. Last year he was sixth at Kentucky, 10th at the Olympics (also taking home a team bronze) and fifth at Burghley for the second year in a row. [Stuff.nz]

Daniel Stewart answers a question about staying focused while riding.  His “Question of the Month” this month deals with how to handle distractions and keep your mind on whats productive instead of what’s destructive, like  previous bad rounds. This is apt timing, as yesterday our own Kate Samuels wrote about her take on mental toughness in eventing. [US Eventing]

The Disciplinary Panel of the British Horseracing Authority banned racing trainer Mahmood Al Zarooni for eight years over the use of anabolic steroids on horses.  Al Zarooni was responsible for nearly 200 horses at Sheikh Mohammed Bin Rashid Al Maktoum’s Moulton Paddocks Stables in Newmarket. The barn was part of the sheikh’s prestigious Godolphin racing enterprise. [Horsetalk]

Ever heard of a Grand Prix Dressage Pony? Now you have. North Forks Cardi, a Welsh Cob stallion that stands at 14.3 hands,  made Grand Prix debut and won the freestyle at the Golden State CDI*** in early April. “Cardi’s” rider Jessica Wisdom met him as a two year old and began riding him at age three. Now, at age 12, the pair has climbed up the competitive ladder together. According to Jessica, Cardi’s compact body actually makes some movements easier. Click to read the full interview and see photos of the newest wonder pony of elite equestrian competition.  [COTH]

Leaving you with a video about miniature horses who have found a career visiting patients at Shands Rehab Hospital in Gainsville, Florida. Thanks for reading EN!