Charlotte is one of Great Britain’s most promising Event Riders, having represented her country on both Junior and Young Rider teams – most notably winning team gold and finishing 4th individually on Little Beau at Blair Castle in 2007.

Charlotte graduated from Edinburgh University in 2011 with a 2:1 in English Literature.

She has been placed consistently, including finishing 9th at Blenheim in 2011 and 5th at Luhmuhlen CCI**** with the homebred Out of Africa (“Zulu”) in 2012.  Despite being a true British rider Charlotte is keen to remember her Scottish roots, and indeed she has been ranked the No. 1 Scottish Event rider in the FEI World Rankings for the last two years.

Supported by the lottery funded World Class Development program she now has her eyes firmly set on the 2016 Olympics.  Charlotte is excited to write for Eventing Nation as she prepares for Badminton just a few weeks away.  Thanks for writing, Charlotte, and thank you for reading.  For more, visit her website.  All photos used with permission.  Click here to read her first blog. 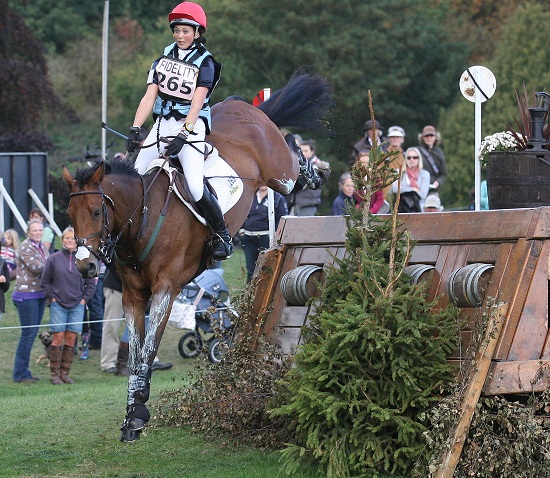 As I write this Zul has just had his last jump with Yogi before we head off to the big B.  He is feeling extremely well, and I am starting to feel a tinsy bit nervous…. I’ve been trying not to think about it too much, and have actually managed to stay relatively chilled I think, but there’s no escaping it now!!  Tomorrow morning he’s going for a final swim, and then we’ll be off –  woohoo – for what will undoubtedly be a seriously exciting week, regardless of how I go.

Finally the sun has decided to make an appearance, and it has been SUCH a treat eventing in the dry!  It started with Belton, which sadly Woody (Longwood) was unable to attend, so I ended up only having Zulu there.  He warmed up beautifully but very quickly, and as a result was slightly over-done by the time we came to do the test, which combined with a couple of ‘frisky’ mistakes kept us away from a really great mark.  Still, I was really pleased with him as he produced some very exciting work, and it’s been a while since he was at a big party.  Similarly, he had a couple of fences down show-jumping as a result of being quite enthusiastic, but the big plus was that we didn’t get any time faults, which proves (thankfully!) that my homework – under Yogi’s magic eye – has paid off.

Since Mark Phillips has taken over the cross-country design at Belton I have had some great rides there.  It’s always a bold track that encourages forward riding, with some tricky questions thrown in, which I think makes it ideal preparation for Bramham or Badminton.  Zul is feeling so much stronger this year, and it’s amazing looking back and remembering how fierce I had to be those two years ago to get our first Advanced clear!  He felt really switched on and well within himself, so I’m really hoping I get the same feeling at Badminton.  However I am going to have to put my foot down there – I can’t help protecting him a little now at the one day events, and I haven’t actually pushed him for the time since Luhmuhlen (as he missed Burghley), so am hoping I haven’t lost my inner speed demon!

Dumbleton had his first outing at Hambleden the following week, which was glorious on several levels.  Firstly it was so sunny I actually put on sunglasses whilst driving there, secondly my lovely friend Becca came to keep me company and cheer us on, and thirdly Dumble was a star.  He is a completely different horse to last year – so much more confident in himself and I think much more comfortable too – which has made the work a lot easier for him.  As a result he delicately sashayed his way around the arena for 28 in the very competitive Open Novice, and followed it up with a super double clear.  I really do love riding him, he’s such a sweet person and thrives on trust.  This weekend though was a true indication of why I am so glad that we have three phases in our sport, rather than just one – again Dumble did a lovely test, this time at Withington, but we got 40.  Okay there were a couple of minor things that meant it wasn’t absolutely perfect, but 12 marks was a bit ridiculous.  Perhaps it was just a reminder that I shouldn’t be complacent!  Eventing is certainly a great leveller.  Once again he jumped a fantastic double clear, and it reminded me of my JRN and Junior days with Little Beau, where we were always the highest climbers, but I would never have changed that – it’s so much nicer going home with a smile.

So we’re off to Badminton tomorrow, and most of all – providing we do actually get there – I will feel so proud that Zul, our little homebred star, who my whole family and team has nurtured so carefully for the last 13 years, is going to be competing at the biggest and most prestigious event in the world.  Who knows what will happen but I do hope that luck will be on our side as I’m sure we’ll both be giving it our best shot.  Feel free to follow the action on twitter – @Charlotte_Agnew!