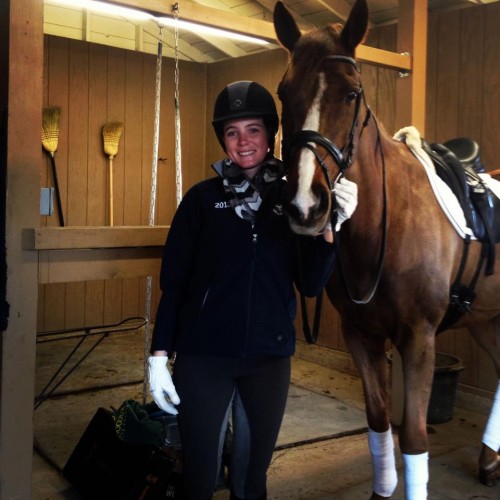 Teresa Harcourt and Bonza Twist of Fate before their lesson with David. Photo via Flying Tail Farms

Good morning EN! The West Coast High Performance training sessions are underway this week, and once again the USEF High Performance Facebook page has been posting updates from the lessons. Yesterday the USEF also posted a link reminding eligible riders that the grant applications for Badminton, Saumur and Luhmuhlen/Aachen are due this Friday. Make sure to check the page for more training session updates (and some of those grant recipients may very well be there this week, so you can get a sneak peak of what’s to come this fall!). Tomorrow’s schedule is as follows:

As Jenni reported yesterday,  Horse and Hound revealed that Kiwi Olympian Blyth Tait has been downgraded to the BE100 level under the new FEI rules. The BE100 level is equivalent to Training level in the US. Don’t like the new qualification rules? Sign the Change.org petition protesting them here. It has over 1,300 signatures so far and is still growing. [Horse and Hound]

British Eventing has named the nine riders that will represent the country during the FEI Nations Cup Series. The list includes the young superstar Laura Collett, Francis Whittlington, Kitty King, and Lucy Wiegersma. Over the course of this year, seven teams of three or four will be chosen from this list of nine to represent Britain at preselected CCIO*** events. At the end of the year the country with the most points will win. [Horsetalk]

New proposals brought up by the FEI mean that ten fewer event riders will go to Rio in 2016. In order to ensure each equestrian discipline has the same number of competitors, the FEI hopes to make Olympic event teams consist of four riders, not five, with one reserve. Under the proposals, an extra 10 dressage riders will be added so that dressage teams also consist of four riders plus a reserve. [Horsetalk]

As you may have read, Lucinda Fredericks suffered a bad fall last week at Tweseldown. She unfortunately broke five ribs and her collarbone, which will keep her out of the saddle for a while. She has released a statement highlighting the importance of remembering to clip your airvest to your saddle every time you go out on course. “If I had remembered I would have possibly walked away with less injuries sustained, it won’t be a mistake I’ll ever make again, I feel very lucky to be alive,” she said. Click to read the full statement on the Team Fredericks website. [Lucinda Fredericks]

The documents supporting this year’s FEI Sports Forum discussions are now available online. The forum will take place early next month, and will include discussions about the proposed changes to international sport horse transportation and the new Olympic team quota. [FEI]

Ever wonder what it’s like to event with your spouse? Listen to this week’s episode of the Eventing Radio show, featuring Leslie and Lesley Law. [Eventing Radio Show]

As she wrote last week, EN’s Jessica Bortner-Harris is putting on a merchandise fundraiser to help finance the general costs and competition schedule of her three-star horse, Win the War. She is selling bumper stickers and t-shirts on her website. Orders must be placed by April 15th. [Support Jessica and Bug]

While I don’t have a video to leave you with today, this may be just as good: 13 gifs of baby horses, courtesy of Horse Nation. Check it out, I promise it will brighten your morning. Thanks for reading, enjoy your Wednesday! [Horse Nation]