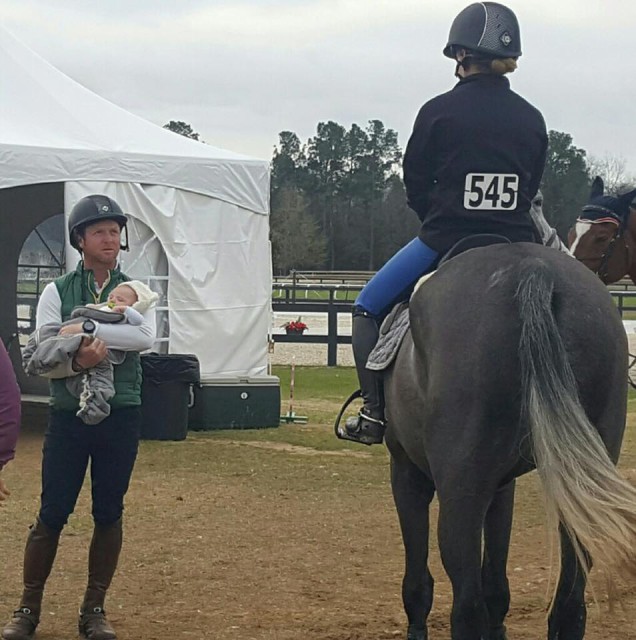 It’s spring (at least it feels like it) which means it’s time for the next generation of eventers to start attending shows. Timothy Bourke was spotted with a tiny auditor in tow as he coached students out at an event last weekend and it surely won’t be the last time we see this tiny spectator this spring.

If you’ve ever thought doing trot sets in two point with your stirrups jacked up was hard, think again. Captain Guy Disney has made history as the first one-legged jockey to win a race under Great Britain’s racing rules. Captain Disney, who lost his lower right leg while serving in Afghanistan, has been racing for a number of yeas after eventually managing to successfully petition for an amateur jockey license. Last Friday, he won a race at Sandown Park to make history. [One-Legged War Veteran Makes History]

If you are a Young Rider or Junior with plans to compete at NAJYRC, mark your calendars. Area declarations are due on March 1st through USEF accounts. All riders for 2017 must submit an Area Declaration if they wish to compete at the NAJYRC Championships held at Rebecca Farm in July. [NAJC/CICOY Declarations Due March 1]

Christina Appling and AB Amelie got to take home the blue in their first ever Intermediate run. Dipping their toe into the water for the first time in the Intermediate Rider division at Rocking Horse last weekend, ‘Emily’ surprised even Christina with a great dressage test and followed it up with typical strong jumping phases to take the win. The pair has been together for nine years and have made it up every level together. [Winner of the Week]

SmartPak Product of the Day: The other day I realized that my schooling helmet, which was once upon a time my fancy show helmet, was purchased around the same time I bought my horse as a five year old. That horse is now fifteen, and I’m thinking that a ten year old helmet (lucky as it may be, since I have never *yet* fallen in it), probably isn’t the best idea to protect my noggin. Enter the new One K Defender, which is ventilated for my sweaty head in the summer and easily cleaned on a daily basis. [SmartPak]