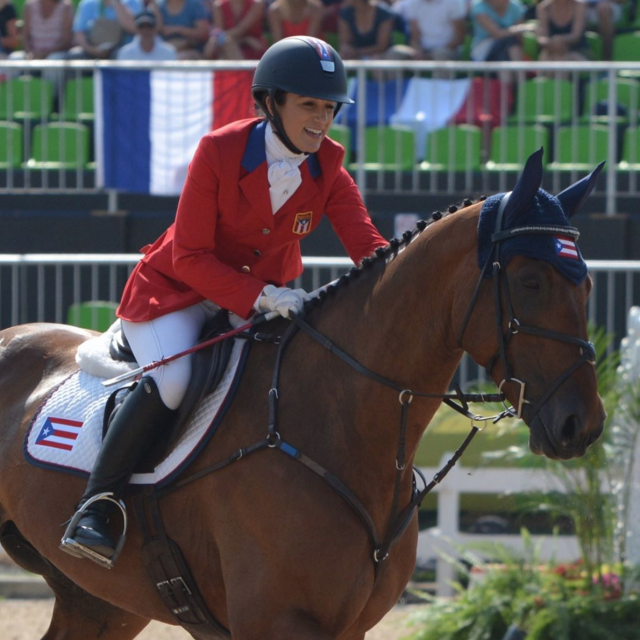 How it feels to complete the Olympic Games! Lauren Billys and Castle Larchfield Purdy complete are based in California but represented Puerto Rico. Photo by Jenni Autry.

I’m feeling pretty emotionally exhausted from the Olympics, and a bit short on sleep too, thanks to the prime time coverage running until midnight on NBC every night. If I’m this tired, I can’t begin to imagine how drained everyone is down in Brazil, getting ready to pack up everything and send it home with the horses. The ups and downs the team involved in Rio has experienced are unreal, and I’m sure they’d all like to sit down on their couch at home for a minute before haring off to the next competition. Especially Phillip, who probably deserves a vacation but instead has five entries at Fair Hill this weekend.

Zimbabwe isn’t a country you would think of when you hear Olympic level event rider. Nonetheless, Camilla Kruger, based in England, not only set the Olympics as her goal, she ended up making the Olympics a full cycle ahead of her actual goal. Originally aiming for Tokyo, her presence at Rio became a huge bonus as she cruised around conservatively and completed a course that dominated some powerhouse countries. [Leading Her Country Into Uncharted Territory]

Meanwhile, Ranco the Chilean chestnut captivated our hearts with his heart. Lobito and his rider Carlos Lobos Munoz ran conservatively around the cross-country, taking all the long routes but ending up with a clear round on Sunday. Competed in South America for most of his career, Ranco and Carlos haven’t had many chances to see world-wide competition but held their own this week. [From the Barracks to the Olympic Games]

Shane Rose is a man who knows how to overcome an obstacle. In his career, Share has overcome broken bones, facial reconstruction, and thyroid cancer. Most recently, he was kicked by a young horse, rupturing a spleen and breaking some ribs. That was fourteen months ago. This weekend, he returned to the Olympic stage. [Tales from Rio: Shane Rose]

Frida Andersen is one of the few who can say they have bred their own Olympic Games mount. Her family bred Herta when she was just a kid, and when Herta was two, the family put both her and her dam for sell, with the intention of keeping whichever horse didn’t sell. Guess which horse sold first? [Tales from Rio: Frida Andersen]

If you’re watching or following the Olympic equestrian coverage, talk about it! The IOC is measuring interest in each sport and as usual, equestrian is on the cusp. Use the hashtags #JointheJourney and #TwoHearts on social media to indicate your interest in eventing, dressage, or show jumping and help let the IOC know that our sport has a huge fan base. [Fans Urged to Support Equestrian Sport]

SmartPak Product of the Day: Mighty Nice is about to get stuffed with grass and carrots and treats while he’s on vacation, and he’s probably going to get at least a few of these Paddock Cakes. If you want your horse to be like Mighty Nice, maybe you should try feeding some of these! [SmartPak]

Video: Here’s Phillip Dutton giving a live 11-minute interview to the NBC Olympics Facebook page — poor Phillip clearly thought the interview was going to be shorter than it was. This link isn’t embeddable but you should click through here and take a minute (or 11) to watch it! 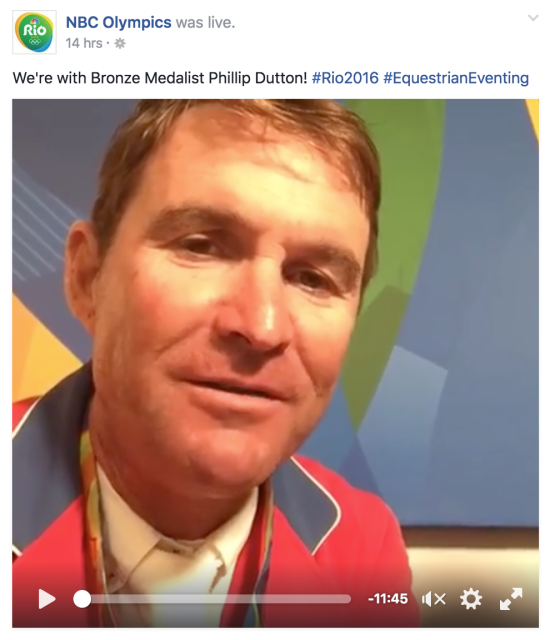