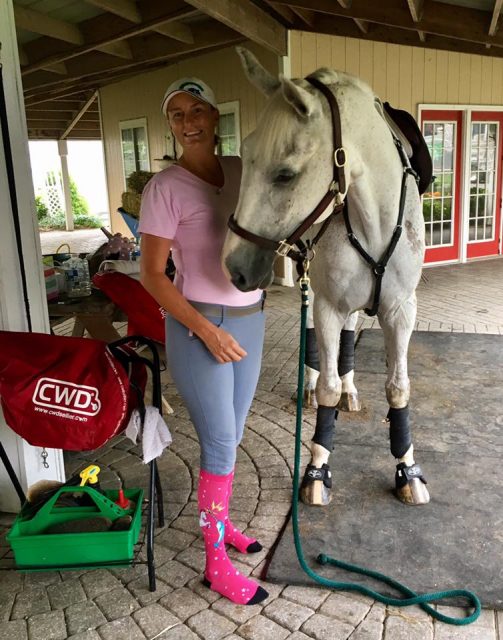 Sara Kozumplik-Murphy has gone full unicorn in an effort to take her real-life unicorn Rubens d’Ysieux overseas to contest the CCI3* at Millstreet. With a fundraiser, schooling jumper shows, and salty unicorn t-shirt sales, she has pulled out all the stops to gain the funding to make Rubens D’Ysieux fly higher and longer than he has before.

The 2017 FEI European Championships are here! The action kicks off today with the first horse inspection at Strzegom in Poland. Will Michael Jung win a fourth consecutive individual gold medal? Or will another nation rise to the occasion and dethrone the Germans, who have won team gold for the last three championships? Listen to EquiRatings’ predictions of the medal winners in the latest episode of the Eventing Podcast. [Europeans Preview Show]

With the fall season imminent, it’s a good time to brush up on the rules. Do you know what the rules require for return to play if you appear injured? What about if you get a concussion? Can you use a medical bracelet or does it have to be an armband? The USEA is here to remind us. [Rules Refresher]

Ian Stark, course designer extraordinaire, is one tough cookie. After falling from a young horse last year, Ian has undergone some ongoing pain that he was told would eventually resolve. As it failed to, Ian underwent an MRI where it was discovered his pelvis had separated. After undergoing a highly specialized operation, Ian is back on his way to recovery, though it may take up to a year to be 100%. [Ian Stark Undergoes Pelvis Operation]

If you’re going to Burghley to spectate, you may be surprised to get a piece of the action. With a riding simulator dubbed the ‘Musto Mare’, you too can tackle iconic Burghley fences such as the Cottesmore Leap. After a brief tutorial on how to ride the ‘mare’, riders will get a chance to ride a six to eight fence course. [Tackling the Cottesmore Leap]

SmartPak Product of the Day: It’s mid-August, which means the sun is beating down as hard as ever. I can feel the weight of it when I ride mid-day on weekends and I’m thankful for my sunstopper shirts to help protect my skin. [SmartPak]