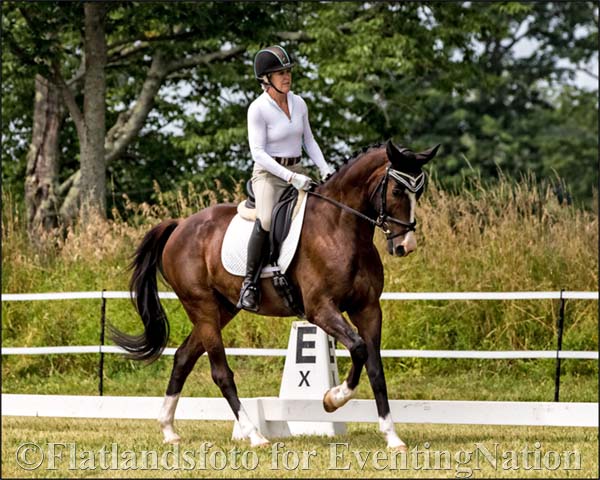 Last June, Nancy Read walked out to the pasture at her New Hampshire farm and found her then 6-year-old Oldenburg gelding, Caribe PCH, had broken his leg in an apparent pasture accident. A career-ending injury at best and a fatal one at worst, a broken leg is a nightmare scenario for any horse horse, but this story has a better than best-case-scenario ending.

Nancy met Baby in 2010 when her sister sister purchased him as a 2-month-old colt from Plum Creek Hollow Farm in Larkspur, Colorado, which imports, breeds, trains and competes German Sport Horses for dressage and show jumping. With offset eyes and buck teeth, the colt found himself for sale, and Nancy’s sister snagged the crooked-faced foal on the cheap, hoping he might still make a good dressage prospect.

As was somewhat expected however, with a sire like Grand Prix show jumper Con Capilot, Caribe PCH loved to jump, so it was only natural that Nancy, the eventer in the family, obtained the coming 4-year-old from her sister.

“The joke in the family is if they don’t like dressage they send them to me,” Nancy laughed. 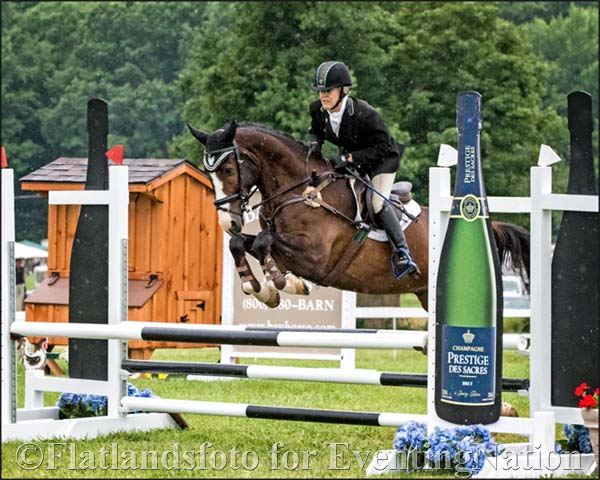 Nancy began his education as an event horse with the help of her friend and trainer Nicole Carroll, who is based in Brentwood, California. Nancy boards her horses with Nicole during the winter months while living with her husband in California from late October to early June. She and the horses travel back to New Hampshire, where she grew up, for the summer months.

It was during Caribe PCH’s first time cross country schooling at Fresno County Horse Park that he earned his barn name. As Nicole was riding him toward a small log, the young horse got distracted by the water behind it, causing him to trip and stumble over the jump. Nancy and Nicole laughed it off as a “Baby Go Boom” moment and the gelding was henceforth known as Baby.

Baby soon found his stride on cross country, successfully progressing to Novice level with both Nicole and Nancy competing him, winning four out of his first six events. But the gelding’s eventing career was put on an indefinite hold last June when Nancy found Baby in his field three-legged lame.

A fracture high up on the horse’s left foreleg was obvious. Feeling instantly sick at the sight of the injury, Nancy called her veterinarian for immediate assistance. She knew they needed to get Baby to an equine hospital for treatment, and she wondered if it would even be possible to load him on a trailer and make it to Myhre Equine Clinic in Rochester, New Hampshire without doing further damage to the leg.

Baby had gone down before Nancy and the vet were able to load him on the trailer, but with some sedatives in his system plus a makeshift cast he miraculously got up, loaded onto the trailer, and safely made the ride to the clinic.

Upon first inspection Dr. Grant Myhre gave the break very little hope of healing enough for Baby to compete again, but the hope was he could be pasture sound. Nancy told Dr. Myhre to do everything and anything he could to help her horse.

It was a rough road to recovery for Baby initially, and Dr. Myhre cautioned Nancy during the first few weeks post-injury that things weren’t looking particularly good. Nancy made frequent trips to the clinic to groom and visit Baby, hoping that a good curry would at least make him feel a little better given that he couldn’t roll while hooked up to a line to keep him from laying down and re-fracturing the healing bone.

Gradually, each day Baby started looking a little brighter. Nancy and Dr. Myhre both gained a little more hope with each passing day that the horse would make a recovery.

Baby was able to be taken off the line at the beginning of September and finally able to return home to Nancy’s farm at the end of that month. The rehabilitation was daunting, but Nancy started slow and diligently, wanting to be absolutely certain that Baby was handling the process well and taking everything slower than even the doctor’s orders.

First came hand-walking, then walking under saddle in November. Nancy incorporated a lot of slow hill work in order to rebuild muscle. Short bouts of trotting were slowly incorporated into the routine, gradually becoming longer. Cantering was finally incorporated in January this year after migrating back to California for the winter. After months on stall rest in the hospital, it also took Baby a long time to get back to normal horse life, particularly trusting people entering his stall.

“Once he started getting fitter and more confident, he started showing he was interested in getting out to shows again,” Nancy said.

Baby’s first outing back was at a schooling jumper show over crossrails just to get him out in a show setting again. Having been more atmosphere than the gelding had seen in seven months, Baby was a little excited and overstimulated, but clearly enthusiastic about being there. His first event back, going Beginner Novice at Twin Rivers Winter HT, was much the same as the normally lazy and laid back gelding bounced his way around the cross country course. 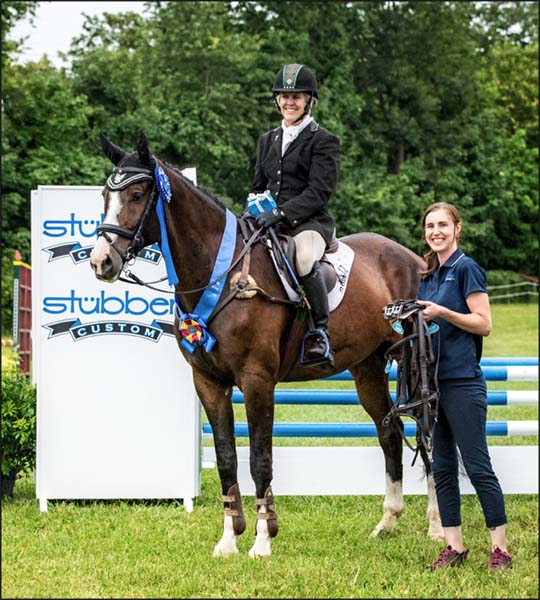 With Baby running so well this spring after his recovery, Nancy decided to make the Fitch’s Corner Amateur Novice Masters Challenge a goal for the summer. The Novice Masters Challenge is open to riders age 40 and older who have not completed an event at Training level or above within the past two years. The class is run over a championship style course with show jumping in reverse order of standing as the last phase.

“The Amateur Novice Masters Challenge was very exciting for me to work towards. To get to jump in reverse order of standing in the evening — when do we get to do that?” Nancy said.

“I’m so grateful to Fernanda Kellogg (Fitch’s Corner owner and organizer) for opening up her farm. It’s a privilege to be able to do this sport in a world where events are dropping and land is disappearing, and the fact that she offers something special for the Novice riders is very sweet of her. It’s very motivating to have something like this to work towards.”

Nancy and Baby won the Novice Masters on a score of 19.2, blowing the competition out of the water and beating his own personal best Novice dressage score by nearly 9 marks. Nancy also took home second in the same class with her other horse, Carolina PCH, on a final score of 27.30.

Despite Baby’s fantastic dressage scores and his continued winning ways, Nancy is quick to stay humble and point out his greenness. There’s still some confidence-building to do on cross country, as there’s still always at least one fence on course that takes him by surprise.

“I actually haven’t had a jumping round yet with him that’s felt totally solid,” she said. “He missed a year due to his injury and he’s still green and still learning. I went to Fitch’s just happy to have a horse that was able and was lucky to have a judge that liked him and we got it done.”

For Nancy, the rewards of potentially progressing up the levels pale in comparison to the enjoyment she finds competing at Novice with her two horses. With Baby, the enjoyment is amplified by the feeling of appreciation she has just to still have him.

“When I go into the arena on him, I’m not even nervous. I’m just thinking ‘I’ve got you and we’ve got nothing to lose’ so whatever happens, it doesn’t matter,” she said.

Nancy and Baby bested their dressage score from Fitch’s Corner with a 17.5 at the GMHA Festival of Eventing in Woodstock, Vermont this past weekend, which they finished on to win their division. Next on the calendar will be a trip to Tryon for the American Eventing Championships.

“I think with these horses you just enjoy the moment,” Nancy said. “To me, it means just as much as when Neville Bardos made a comeback with Boyd Martin. For me it feels the same. I adore this horse and if he can still do a level we’re comfortable at then I’m happy.”

Here’s wishing Nancy and Baby continued success and happiness! Special thanks to Joan Davis of Flatlandsfoto for providing photos from Fitch’s Corner.