It’s Belmont week! And while there will be no Triple Crown fever in the air this year, there are still plenty of fun storylines to follow.

Early odds back Preakness winner Exaggerator, but we’re going to come right out and admit that we’re cheering for Lani, whom Lorraine Jackson over at Horse Nation infamously dubbed “the weirdest racehorse ever” in this open love letter to the horse following his bizarre performances in the Kentucky Derby and Preakness. She recounted both races in painful detail: “If James Franco were a jockey and rode Seth Rogen like a horse, and they left the starting gate of the Preakness, I think their first furlong sprint would have been faster and more majestic.”

With the Belmont’s longer distance and Lani’s penchant for dramatic grand finales, there may be hope for him yet. Lorraine narrates Lani’s late play on the final stretch of the Preakness: “You don’t make a move until the final turn, and then you CAREEN down the stretch, weaving between horses and nearly running people over, left and right and left and right and had that race been 1/16 of a mile longer, I guarantee that your crazy little broken head would have been in the very damn front of the pack, because YOU CRAZY, Lani. Your final placing in the Preakness belies what you nearly accomplished, in spite of being a horse who should probably be institutionalized and living in a horsey straight jacket.”

Best of luck this weekend, Lani, and if doesn’t work out for you out there maybe you can come have a post-racing career as an eventer. We know a thing or two about “insanity in the middle” — you might just be a perfect fit.

Here are three OTTBs who are ready to get started on a new career today!

Meet the lovely and classy Rena Starlight (Star Dabbler – Sistine Light, by Light of Morn), a 16-hand, 2008 mare. Rena’s story begins with a spontaneous detour. Several years ago, New York City resident and film director Victoria Racimo was passing by Lexington on the interstate when she decided to take a peek at the Horse Capital of the World. This impromptu exit marked Racimo’s entry into the world of retired racehorses. A chance meeting with Jeanne Mirabito, founder of Our Mims Retirement Haven for ex-racemares, inspired Racimo to write and produce a documentary about Mirabito’s work, the great racemare Our Mims for which the sanctuary is named, and the plights of unwanted racemares. Then out of curiosity Racimo began following the career of a random racemare, Rena Starlight. Something about the mare captured Racimo’s heart, so much so that when Rena started dropping in class, Racimo, fearing for her wellbeing, spontaneously claimed her.

With no idea of what to do next, Racimo reached out Mirabito. Mirabito found a farm where Rena spent several months being let down until she was ready to transition to a new career. Then Mirabito and Racimo together reached out to the MMSC. An elegant, well-built mare with no injuries, Rena was accepted into the Horse Centered Reschooling Program. Newly arrived at the MMSC, Rena is currently getting “spa” treatment, doing Natural Horsemanship and ground work. Her intelligence is striking, as is her willowy, graceful body. She is the MMSC’s black swan that is sure to dazzle when she is ready to hit the stage. 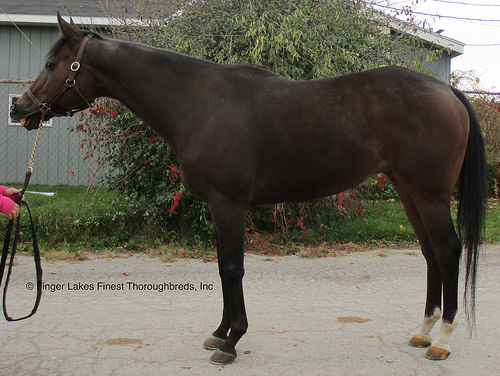 Even on the dreary day he had his photo shoot with Finger Lakes Finest, this gelding’s slightly roaned coat shined, showing off his good care. Brunelli (named after the wine!) comes from a shed row of impeccably cared for horses and had a successful racing career, earning over $105,000 in his 58 starts. More recently he has demonstrated that his heart isn’t in it anymore, even though his legs and body could keep going.

Brunelli is very sound and with a big, reaching trot. He was bred by his trainer’s brother and has remained in the family for his entire life. His trainer refers to him as “the family pet” and you can tell he is very loved! He is described as having an excellent personality — always friendly and pleasant with no stable vices. We are sure the already amazing Brunelli will be just like fine wine, getting better with age, and can’t wait to see his talent will bring him in his next career. 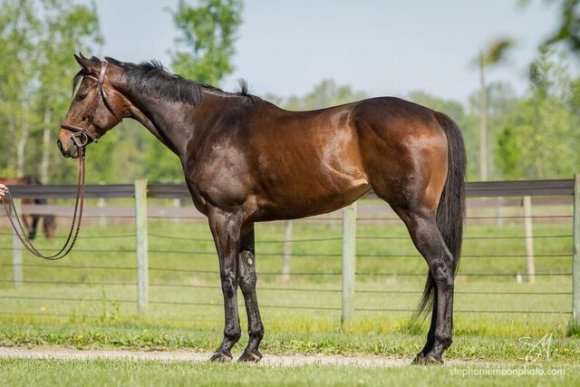 We like the look of this 2012 15.2-hand mare, Survive the Storm (Tropical Storm – Arctic Lights, by North Prospect).

Racing just wasn’t in the cards for “Storm” so she is being given the chance to try her hand at another career she might be better suited for. Her personality is described as sweet, inquisitive and a bit tentative — she is always respectful to handle and will thrive with her own person to trust, for whom will be a great partner and very loyal.

Under saddle Storm is pretty level-headed and straightforward to ride; once she relaxes over her top line she will drop her head and lengthen her step. She has no known injuries, gets along well with the group of mares she is turned out with, and the only vice she has is occasionally swaying from foot to foot at her stall gate when she is anxious.