It’s Derby week! Gosh, that’s weird to say in September isn’t it? But hey, here we are in a really weird year so let’s just embrace the fact that Kentucky Derby has finally arrived. The race is just around the corner at this point, with NBC Sports televising the event including the Kentucky Oaks on Friday and beginning their Derby coverage at 2:30 PM ET Saturday. Post time for the Derby is 7:01 PM.

There is plenty to do leading up to the event to get you in the mood for this very different Derby. Horse Country, an organization that promotes equine-related attractions in Kentucky, has been live streaming farm visits all week on their Facebook page (and you can check out any you missed here) and remaining visits this week include tours of Claiborne Farm, WinStar Farm, and, one of our favorite organizations here, New Vocations Racehorse Adoption! If you’re local to the area, a few farms are offering in-person tours again, but the above live streams are a super way to explore some of these famous properties from the comfort of your own home.

Like the Belmont Stakes, which was run relatively on schedule in June and serves as the first leg of the Triple Crown this year, the Kentucky Derby will run without fans in the stands this weekend, and it was just announced that the Preakness Stakes in October will follow suit as well. But more than just the pandemic will be affecting the Run for the Roses this year, as the wrongful death of Breonna Taylor at the hands of Louisville police has brought Black Lives Matter protests and demands for police reform to the front door of Churchill Downs. While Breonna’s case is finally under investigation, there’s still much more to fight for to demand justice. By all means enjoy the farm tours and races this week, but take a moment to acknowledge your humanity and do what you can to fight against social injustices.

And now without further ado, our OTTB picks of the week. They may not have run for the roses, but they’ve got the potential to be your next best buddy and eventing partner: 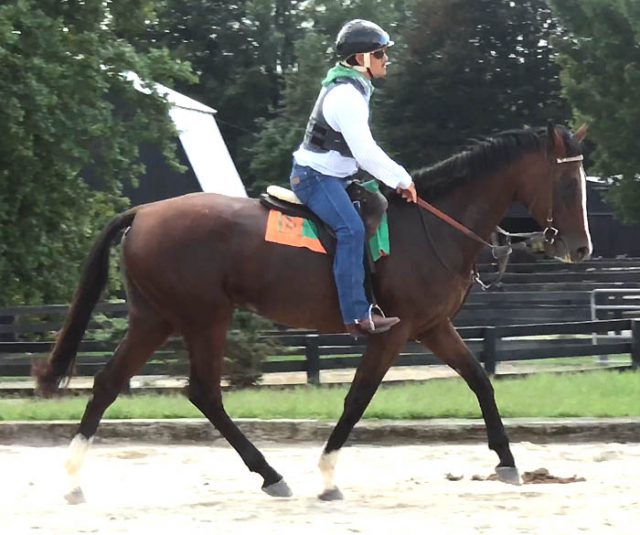 Kissthebutterflies is a recent arrival at Second Stride, so we don’t have much information on her, other than that she last raced in 2017 and “since retiring from racing, she has been shown in eventing.” A previous history of eventing isn’t something we come across on the websites of Thoroughbred-rehoming organizations often, but a quick Google search of her name show that this nice mare has indeed completed a few starter trials in Maryland previously. We’re not sure of her other history, but she looks sound from her videos and like a cute mover. Who knows, she could be a real steal of a deal! 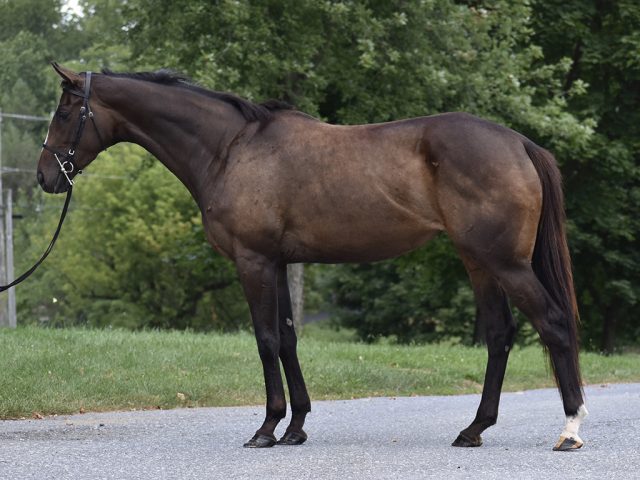 The staff at New Vocations call Orbiting the Moon, a.k.a. Molly, “a star in the making!” This four-year-old may stick a bit on the shorter side, coming in just under 15.2-hands high, but she’s well built and has no problem taking up the 5’11” rider’s leg who is in the irons in her videos. Molly seems to be the whole package: a sweet horse who’s easy to handle and happy to greet you in the barn, and a sporty mare who is a great balance of whoa and go under saddle. Molly retired from racing this summer with no known injuries after 18 starts and $37,455 earned. 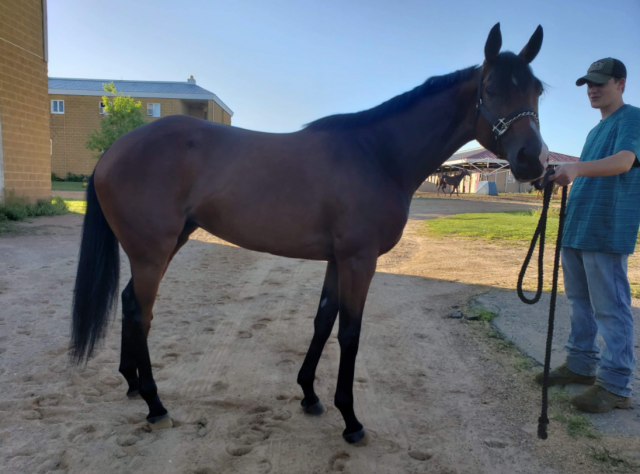 How cute is this face?! Cashmere Bliss has been a good worker, earning $21,550 in 24 career races, but she’s all fitted up with no where to go next since her Trainer/Owner winters in Arizona and Turf Paradise’s meet, which normally runs from October through May, has been canceled. This mare is athletic, smart, and does best when she’s in work so her owner would love to find her a new home and career before she heads South. Cashmere Bliss is entered to race once more at Canterbury Park in Minnesota on Sept. 9, but needs to be bought and picked up by Sept. 10 when her owner heads out.