We really do try to spread the love around to different organizations in our Weekly OTTB Wishlist presented by Cosequin (Have an organization in mind that you’d like to see featured? Email me!), but boy is it tough when there are so many nice horses coming out of one place and in a hurry to find new homes!

Last week we mentioned that the meet at Finger Lakes Race Track in Farmington, New York, would be wrapping up soon (next Wednesday!) and horses who wouldn’t be heading south for their trainers would need to find new gigs. So here we are with another three lovely horses available — all for absolute bargain prices of $1,500 or less due to the end of the meet — through Finger Lakes Finest Thoroughbreds Inc., and there are so many more on their Facebook page still. Come and get ’em! 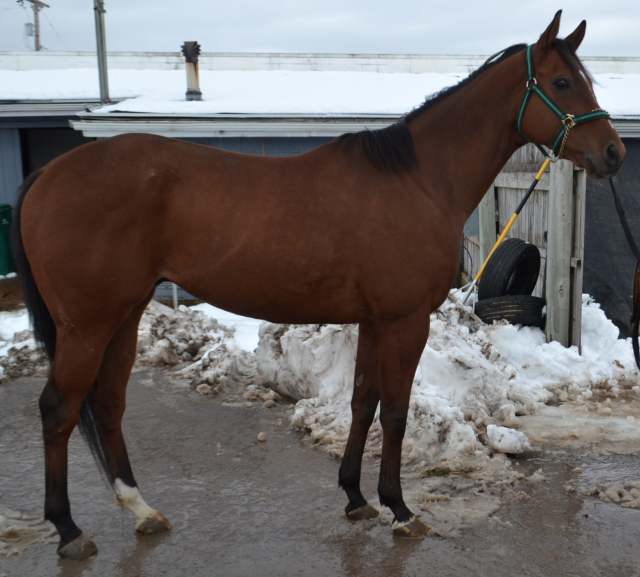 This horse’s trainer told the FLF volunteers that Cats Landing is “the best looking horse he’s had” and we have to agree — he’s a really nice one, indeed! With that lovely uphill build and a great pedigree, we can see this gelding doing really well in a second career as a sport horse. As it is, “Cat” did alright for himself as a racehorse too, steadily finishing in the money and having earned over $116,000 total in 55 starts. This year, though he’s had no reported soundness issues, Cat just doesn’t seem to be showing the same enthusiasm for racing that he has over the past few seasons so his connections would like to see him excel in a second career. Cat seems like the kind of horse who’ll eagerly meet any new challenges you bring him. His trainer says he has the “been there done that” attitude seen among many warhorses, has no stall vices, and is very well behaved. 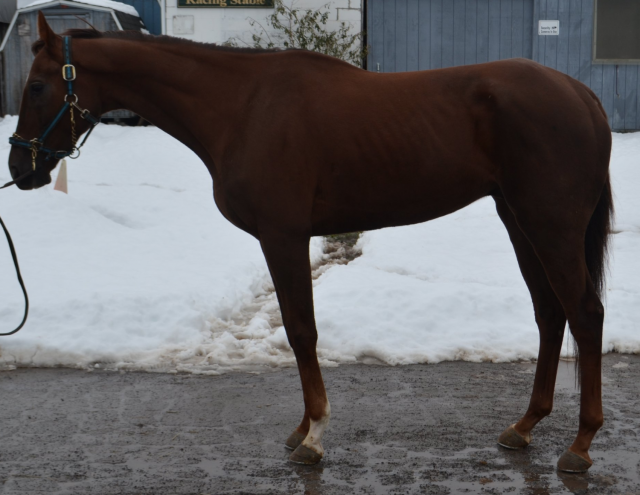 This gentle giant found himself in Pennsylvania this summer with a trainer who then fell on hard times and had to divest of his herd. Mr. McFrosty wound up at Finger Lakes with a trainer who hasn’t had the resources to put into his condition, so he’s currently in “diamond in the rough” condition. He does, however, have a great foundation to make a nice sport horse and with some TLC and elbow grease could wind up being a really handsome guy. Mr. McFrosty has three wins out of his 17 career starts and two of those came earlier this year. That athleticism combined with his cool breeding could make Mr. McFrosty the deal of the century! 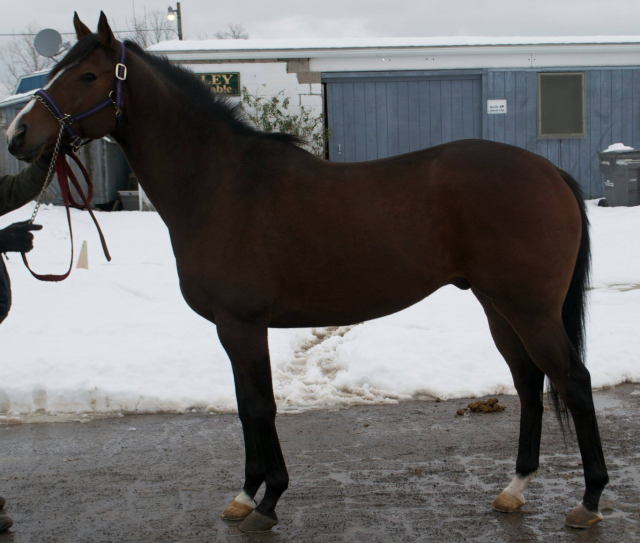 Total Accounting (SLIGO BAY (IRE) – ON ACCOUNT OF ME, BY UNACCOUNTED FOR): 2011 15.3-hand Ontario-bred gelding

Picture the adorable good looks of a pony, but the athleticism of a Thoroughbred and viola — here’s Total Accounting. Don’t let that dashing forelock and mischievous eye fool you too much, he’s been a pretty good racehorse over the years, with $168,000 in 68 starts. This year he hasn’t really been into it, however, but his trainer says he has “no problems at all.” Not only has his sire, Sligo Bay, produced some successful steeeplechasers and eventers, but he’s said to pass on his sweet demeanor to his offspring, and Total Accounting is no exception. Even after being cooped up for a few few days through the recent bad weather, he was nothing but friendly, curious, and well-behaved for his photoshoot!