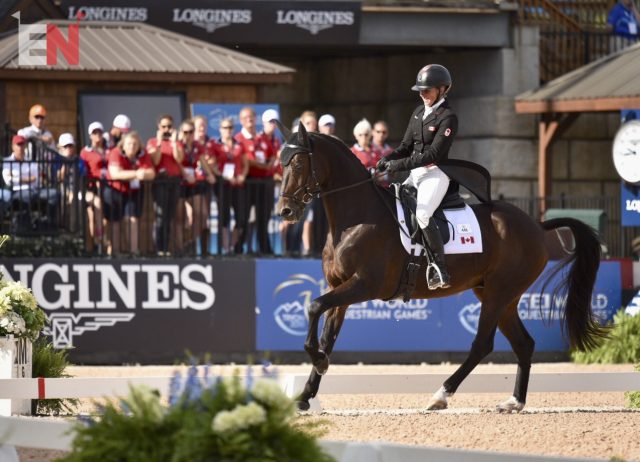 We’re back. We’ve only almost lost one reporter due to heat exhaustion (It’s like really, really hot + humid here). And we’re ready for day 2 of dressage at WEG!

Official kick off time is 9 a.m. with Astier Nicolas and Vinci de la Vigne for France. Click here to see which pairs to keep an eye out for this morning.

ICYMI: Julia Krajewski is sitting pretty over 7 points ahead of the pack. Catch up on yesterday’s reports at this link. 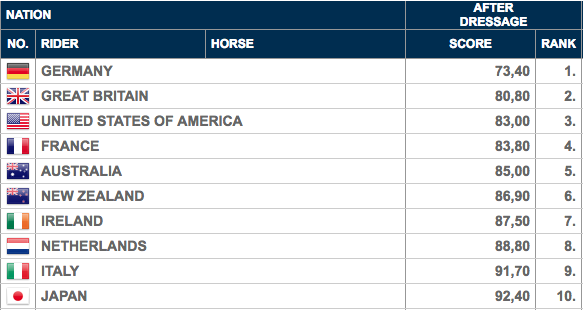 27 combinations have achieved a CCI4* dressage personal best already. This does not include combinations who are making their four star debut (obvs).

4:24 p.m. Raf Kooremans and Henri Z earn a 27.7 for the Netherlands in their first 4* test. These scores are tightly bunched.

4:19 p.m. This is a dreamy walk by Henri Z and Raf Kooremans, and right into a bang on halt.

THE MAGIC NUMBER. An incredible 20 people are already below 29 already at @tryon2018. Yoshi could join them here…..

4:11 p.m. Yoshiaki Oiwa is here fresh off a win at the Asian Games, and ready to rep Japan with Calle 44.

Who’s that bounding into the arena?

It’s none other than Japan’s Yoshiaki Oiwa and the beautiful Calle! 😍 🇯🇵 #Eventing #Tryon2018 pic.twitter.com/EPpxftVXk3

4:04 p.m. The French are defending Olympic gold medalists, and now they’ve got their final rider, Sidney Dufrense in the ring.

This is the best EVER start to a World Games for an Irish team (87.5).
Ireland will sit just outside the top 6 overnight. @TeamIRLEq pic.twitter.com/h8OhHNVbL1

3:47 p.m. Eyes are shifting to the team results as we see these final team representatives. Now we’ve got Sarah Ennis and Horseware Stellor Rebound for Ireland.

3:46 p.m. Jonelle Price and Classic Moet have scored a 30 as the final rider for New Zealand. Equirating’s Sam Watson says points lost in the canterwork for this powerhouse pair.

3:40 p.m These two are on an upward trajectory. Classic Moet looking very correct, trying to stay around those marks of 7.

3:25 p.m. Alright, folks. I know the live scoring website is down for some. Here’s the top 22 ahead of the final group: 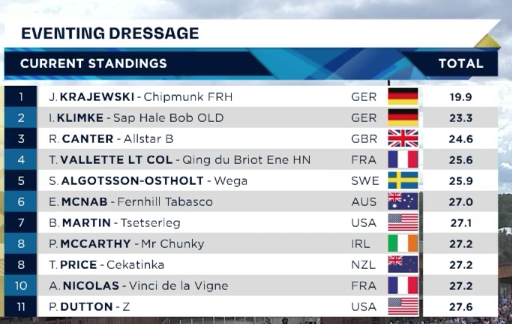 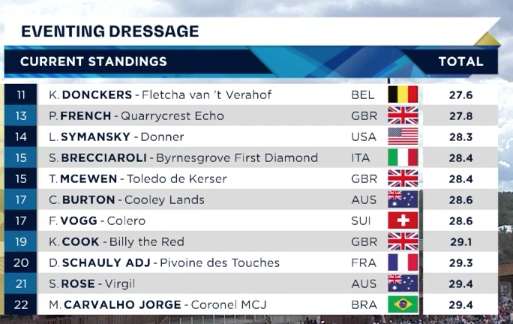 Marcio Carvalho Jorge and Coronel MCJ are the final pair for BRA and has a chance to put up best score for the nation with a 12 month average of 32.7. #Tryon2018

Its out there now! The Germans have made the best EVER start by a team to a World Championships. https://t.co/tENvcacrFJ

3:12 p.m. Aw! Shane reaches up to give Virgil a little scratch on his ears after the test.

3:10 p.m. Shane Rose in for Australia aboard Virgil.

3:05 p.m. Arg — live scoring sites currently down. Will update you as soon as I get the marks.

Rosalind Canter (GBR) and Allstar B can also change the leaderboard up. They owned the best 4* PB in the field of 23.9…up until Chipmunk’s score yesterday. A 12 month average of 25.4 could still have them in the mix near the top. #Tryon2018 @TeamGBR

2:50 p.m. Phillip Dutton and Z post a 27.6 as the final pair for the US! Many teams have one more rider to come, but at the moment US stands in second. 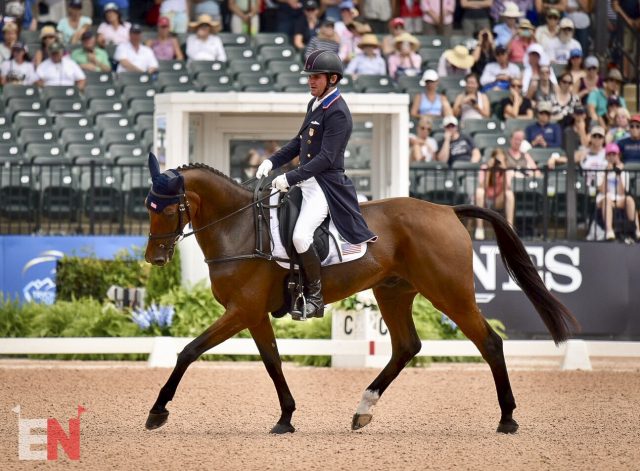 2:48 p.m. Boyd Martin is on the commentary and confirming that Phillip’s bronze medal has made him more competitive than ever.

2:44 p.m. Wow Ingrid and Phillip back to back is too much for my heart!

2:35 p.m. Hard to see on the stream, but Ingrid is giving Bobby quite a few pats throughout the test. So sweet!

2:08 p.m. Nothing but North American love on the live stream! Will Coleman has nothing but praise for all that Selena has done with Woody.

Selena O’Hanlon and Foxwood High could be a big game-changer for the Canadian team score. If they can get near their 4* PB of 26.4 (and their 12 month average of 27.9 says it’s possible) scored at Badminton this spring, they can help regain CAN’s edge. #Tryon2018 @Equestrian_Can

2:03 p.m. 32.5 for Bill Levett & Lassban Diamond Lift after quite a bit of discrepancy from judges.

Lassban Diamond Lift and Bill Levett will try to keep the momentum going for AUS despite being the final individual. This young horse with a 3* average of 29.8 and a 3* PB of 24.1. #Tryon2018 @EquestrianAus

1:32 p.m. Now we welcome Italy’s Simone Sordi and Amacuzzi. Before eventing, Simone was known for as a flat racing jockey.

1:30 p.m. Will Coleman is on the livestream now, saying that the breezes today make the ringside ferns start moving.

1:26 p.m. Lots of expression (and tail swishing) for Dunrath Eclipse in the canter lengthening.

Patricia Ryan (IRL) and Dunrath Ecplise come forward as individuals for Ireland. This is one of the eleven pairs in the field whose 4* average of 32.7 bests their 3* average. #Tryon2018 @TeamIRLEq

Wind is picking up and clouds moving in here @tryon2018 https://t.co/nDSF7ypDpC

1:15 p.m. We now welcome Felix Vogg and Colero who we’ve been lucky enough to have in the states since early this year.

12:02 p.m. Last to go before the lunch break: Louise Svensson Jähde and Waikiki 207 for Sweden.

Rumor Has It N.O.P. has highest number of combined 3/4* starts in the field under Merel Blom (NED). They will need to get close to their 4* PB of 34.0 to help NED achieve more competitiveness. #Tryon2018

Toshiyuki Tanaka and Talma d’Allou for Japan come forward with a solid 12 month average of 31.3 as the horse does his first 4* test. #Tryon2018

11:43 a.m. Even through the canterwork, still trending mid 20s for Thiabut.

France’s Thibaut Vallette and Qing du Briot Ene HN have one of the top two 4* averages in the field, sitting behind only SAP Hale Bob with a 26.6. Look for a potential podium change here. #Tryon2018 @FRA_Equitation

@lynn.symansky.equestrian just rode Donner to his personal best CCI4* dressage score – a 28.3. They currently sit in 7th, but keep an eye on the live scores here: https://bit.ly/2Mreoh7 🇺🇸️🇺🇸️🇺🇸🇸️

11:39 a.m. Another for France, Thibaut Vallette Lt Col and Qing du Briot ENE HN with trot working trending as low as 23.7 in the first parts of the test.

11:37 a.m. 28.4 for Italy’s Stefano Brecciaroli and Byrnesgrove First Diamond, which is currently 9th.

Mr Chunk achieves a 4* PB with @IrishEventer despite taking over as the leader of largest opinion difference from the judges; Largest score of 76.55% from B is 9.14% larger than H at 67.41%. #Tryon2018 @TeamIRLEq

11:32 a.m. Italy’s Stefano Brecciaroli and Byrnesgrove First Diamond are trending in the 24-26 point zone by the midpoint of the test.

AUS and NZL are currently the only nations who have all team riders exceeding expectations with one rider to go. Only SWE can join them in the next session. With only 3 riders, BEL could join them in final session. #Tryon2018 @EquestrianAus @EquestrianNZ

NZL fights back next with Tim Price and Cekatinka who has broken into the twenties more often than she hasn’t in her seven 3* starts. #Tryon2018

10:58 a.m. Lots of cameras coming out for Tim Price who is up next. Spectators seem pretty pumped to see the recent Burghley winner.

Watching Dressage on day 2 with this lovely gentleman! I couldn't ask for more supportive parents♥️

10:53 a.m. Large gust of wind drops a sprinkling of sawdust on the spectators.

And it's an impressive 28.4 penalties after a great test from @TomMcEwen1 and Toledo! pic.twitter.com/yUtp7ZU479

10:40 a.m. The first was a bit sticky, but the changes are getting progressively better through the test for Lara.

10:32 a.m. Hate to see the late final change for Tom, but otherwise a very nice test.

10:28 a.m. Here comes Tom McEwen and Toledo de Kerser — a pair who have a real chance at shaking up the leaderboard. 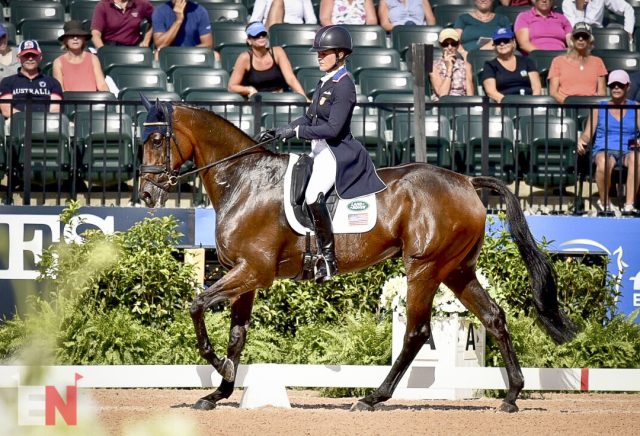 10:19 a.m. Good intention fans misread Lynn Symansky’s quiet signals as waves, and the crowd gets a little excited to see Donner. Luckily for Lynn they did quiet!

.@LynnSymanskyEq 🇺🇸 & Donner looking more than ready for their round in the #Eventing Dressage 💪#Tryon2018 @USequestrian pic.twitter.com/OZGn44foyn

10:13 a.m. This continued jackhammering as background noise during Andreas Dibowski’s test really sets a nice feel around the stadium…

9:50 a.m. Wafting smells of a fire? are swirling around the ring. Not sure if this is restaurant-based or construction-based.

9:43 a.m. An uncharacteristic break to trot in the canter work for Pavarotti, and then a bit of a wild change. Shame the effect I’m sure that will have on her score.

9:42 a.m. As always, Pavarotti is a pleasure to watch in the dressage.

Time for the third round of team scores. This means the team analytics are about to get really interesting. #Tryon2018

9:37 a.m. The crowed loved that test for Pauliina!

Ferro S and Pauliina Swindells (FIN) have improved their recent form, dropping 2.2 points from their overall average for their 12 month average. This is a horse who could break into the twenties on a good day. #Tryon2018

It's a great start to Day 2 of Dressage

9:30 a.m. I’m sitting right on the diagonal, and let me tell you Sandra’s last change was as straight as an arrow.

9:25 a.m. German domination continues today. Sandra Auffarth’s test has a certain “I’ve won WEG before, I’m not afraid to do it again,” kind of vibe to it.

9:20 a.m. On site today? Please join us in using the hashtag #OverheardAtWEG. I’ve already heard so many interesting things… Let’s chronicle it!

Brazil’s Henrique Plombon Pinheiro and Land Quenotte do Feroleto will be making the horse’s first start above 2* for 2018. Their last outing at this level, back in 2017, was a PB of 33.1 but they normally sit closer to their average of 38.2. #Tryon2018

9:16 a.m. Brazil’s Henrique Plombon Pinheiro flashes quite a grin down the centerline to start his test with Land Quenotte Do Feroloto.

9:13 a.m. Oh, dear. Dan seemed to miss a few movements of the test. The judge has rang the bell and he’s back on track.

9:09 a.m. Well done on the first medium trot for Dan Jocelyn and Grovine de Reve. The crowd gives a little golf clap for him. 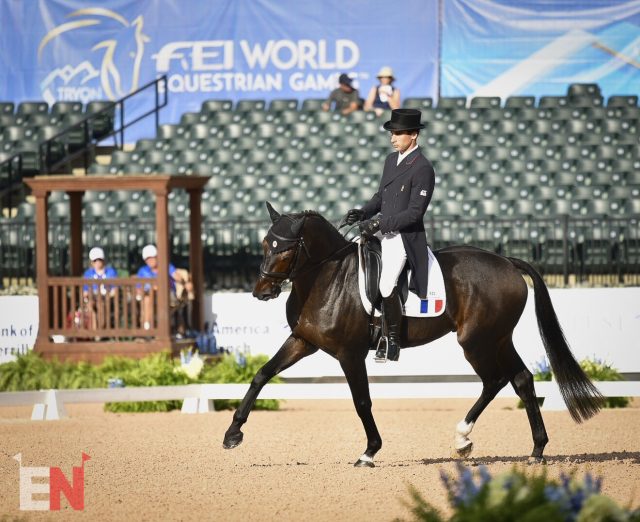 9:02 a.m. Loving the start for this one. Vinci de la Vigne is a young horse, but he doesn’t seem very concerned with the atmosphere.

8:55 a.m. Good morning lovely readers! It’s just barely 9, and we’re already sweating. I know, I know — TMI, but I really can’t understate how humid it is. Yes, it’s hot too, but the combination with the humidity is taking us to an unpleasant part of the heat index. Keep that in mind as you’re watching from home today.