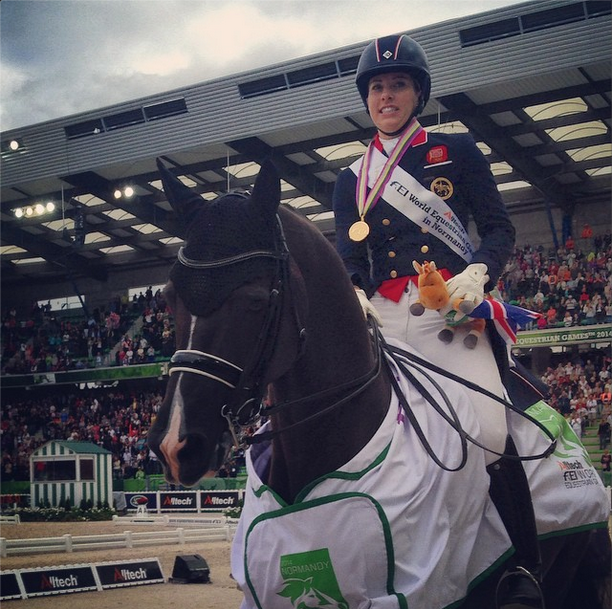 Charlotte Dujardin and Valegro on another victory lap. Photo via the Normandie 2014 Instagram.

Well, well, well – whoever said “the third time’s a charm” must have been thinking of Charlotte Dujardin, who is definitely having a charmed weekend in Normandy. Charlotte and Valegro went to town on their freestyle test today, handily winning the division with a score of 92.161%.

d’Ornano stadium was absolutely packed for the Freestyle competition today, and dancing to music from How to Train Your Dragon, Charlotte did not disappoint the crowd. Neither did the other riders, however, as a full-on performance was put on by all riders today.

Germany’s Helen Langehanenberg, riding, Damon Hill NRW, scored an 88.286% for silver, putting the question in the crowd’s mind that perhaps this was the score to beat. Helen will no doubt be thrilled with her performance today. 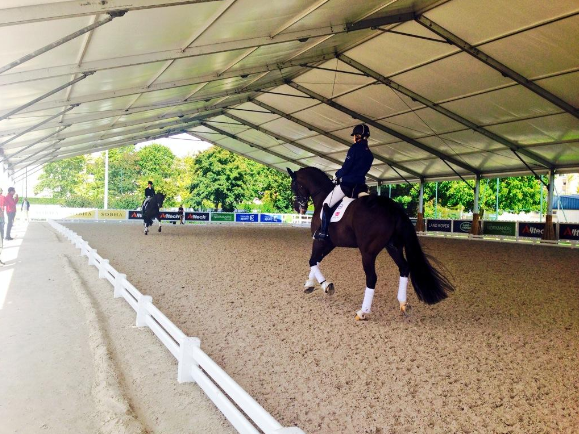 Helen Langehanenberg and Charlotte Dujardin in their final warm-up moments. Photo via Normandie 2014 on Twitter.

Riding for the Netherlands, Adelinde Cornelissen and Jerich Parzival N.O.P. will take home a shiny bronze medal for their stellar efforts. This pair earned an 85.714% to medal with breathing room over fourth placed Kristina Sprehe (GER) and Desperados FRH.

We must also give a warm shout-out to the USA’s own Laura Graves, who laid down an 82.036% with Verdades to finish in fifth overall.

The U.S.’ other pair, veteran Steffan Peters with Legolas 92, finished their weekend in 10th place overall on a score of 77.321%.

The Para-Dressage riders also held their freestyle competition today. In the Grade IV competition, Belgium’s Michele George and FBW Rainman took home the gold medal, scoring a 78.650% to scrape out the win over Great Britain’s Sophia Wells and Valerius, who were close behind in silver on a 78.050%. The Netherlands’ Frank Hosmar and Alphaville N.O.P wound up with bronze after scoring a 75.950%.

In the Grade III competition, Sanne Voets and Vedet PB N.O.P., representing the Netherlands, are new owners of a gold medal after scoring a 77.450%. Germany’s Hannelore Brenner and Women of the World will take home silver on a score of 76.200%, and Annika Lykke Risum (DEN) and Aros A Fenris round out the podium with a score of 73.050%.