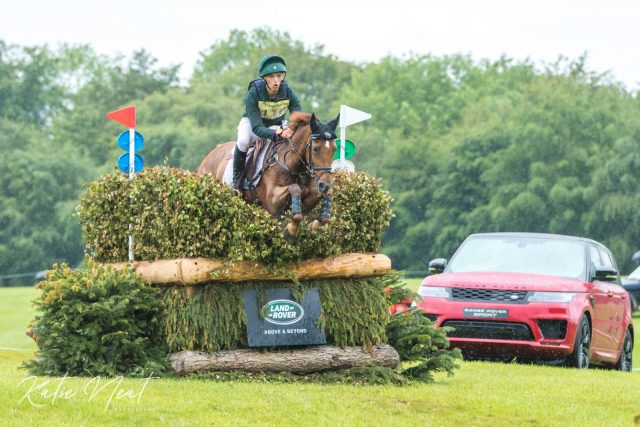 A second team has been announced for the forthcoming FEI European Championships, to be held at northern Germany’s Turniergëlande Luhmühlen from the 28th of August through the 1st of September. As team silver medallists at last year’s World Equestrian Games, Ireland have secured their qualification for next year’s Olympic Games in Tokyo, and they certainly haven’t been resting on their laurels since then. The announcement comes just days after the Irish team took silver at their home Nations Cup at Camphire, while Sam Watson won his second four-star of the year with Imperial Sky.

Five riders and six horses have been named to the Irish squad, of which five combinations will ultimately travel to Germany and four will be named to the team. Congratulations to:

[8/2 update: Tony Kennedy and Westeria Lane will replace Clare Abbott and Europrince on the squad after Europrince picked up an injury. Irish eventing team manager Sally Corscadden announced, “Stepping up to join the squad will be U25 rider Tony Kennedy and his experienced horse Wisteria Lane. We are very fortunate to have a combination that have already successfully completed Luhmühlen this year finishing a very credible 14th. Tony was a member of the bronze medal winning Young Rider (U21) team at the Strzegom Europeans in 2015 alongside teammate Cathal Daniels. This is a great opportunity for Tony to debut on a senior team.” The updated squad is Cathal Daniels riding Rioghan Rua, Sarah Ennis riding Woodcourt Garrison, Ciaran Glynn riding November Night, Tony Kennedy riding Westeria Lane and Sam Watson riding Imperial Sky. [Horse Sport Ireland]

“This year has been about building on our success from the 2018 World Equestrian Games in Tryon, where Ireland won Team and Individual Silver Medals and became the first Irish sports team to secure Olympic qualification for Tokyo 2020,” says High-Performance Eventing Director Sally Corscadden. “The bar in European eventing is set very high, so we are sending experienced combinations to represent Team Ireland at the Europeans. We can be full of confidence going to Luhmühlen with four-star international wins earlier in the year from European squad member Sam Watson, and a great team result last weekend at our home Nations Cup in Camphire.”

Just one combination on the list contested last year’s WEG – Cathal Daniels and his feisty mare Rioghan Rua finished 26th individually, and have since finished sixth in the Event Rider Masters at Chatsworth, before going on to win Bramham’s under-25 CCI4*-L. Both Sam Watson and Sarah Ennis featured on the team at Tryon, though on different horses – Sam rode Ardagh Highlight, while Sarah rode her long-time partner Horseware Stellor Rebound.

The team will be accompanied by a full bevy of support staff, including Grant Wilson, who takes over as showjumping coach from Ian Fearon. The Irish team will be aiming for its first European Championships podium finish since 1995, when they took team bronze and individual gold (Lucy Thompson and Welton Romance) at Italy’s Pratoni del Vivaro.