EN’s contest from our sponsor OCD and Doc’s Products Inc. invites you to share your rehabilitation stories with us. We’ve had some wonderful entries so far and entries are still open through May 31, so don’t forget to send your story to [email protected] for your chance to win an awesome prize pack from OCD. 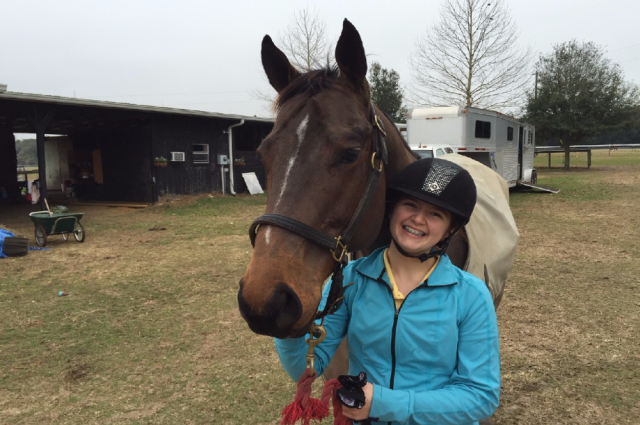 Welter Weight is a Kentucky-born OTTB. He only had three starts but his placings were quite impressive, having finished twice in second and once in third.

My trainer Alex Green, who owns Dry Ridge Farm in Loudon, Tennessee, bought “Wellie” from Stone Street Stables when he was four in 2014 and sold him shortly thereafter to one of her working students. From day one, Wellie was a calm, lazy, easy-going thoroughbred. He wasn’t wild, hot and spicy. He just went out, did his job in the ring, and sat happily in his stall munching hay.

Last year in January of 2015, I met Wellie in Ocala, Florida while Alex was down there training for the winter season. I had been horse-shopping for a while but none of the horses I looked at seemed to fit my criteria. I was looking for a horse that was calm, level-headed and would get me going up the levels. I needed an awesome first horse to get me around cross-country safely, take me through show-jumping without a hitch, and be able to pull off a nice dressage test. I never had a “first pony” when I was little, so I was looking for an experienced eventer.

When we heard about Alex, we gave her a call and she said “I think I have the perfect horse for you.” Within one short week in Ocala, I went from being horseless to owning the perfect horse for me. He was just amazing. I could take him for a gallop and then he would come right back and be able to collect himself for dressage. He was everything I was looking for in a horse and more.

He had run Beginner Novice and placed top 10 at his first recognized show, but Alex suggested having him do an event at Novice. Hannah Horton, his owner and Alex’s working student for the winter, ran him Novice and he finished on a score of 39.5. He was jumping brilliantly and was showing lots of potential. 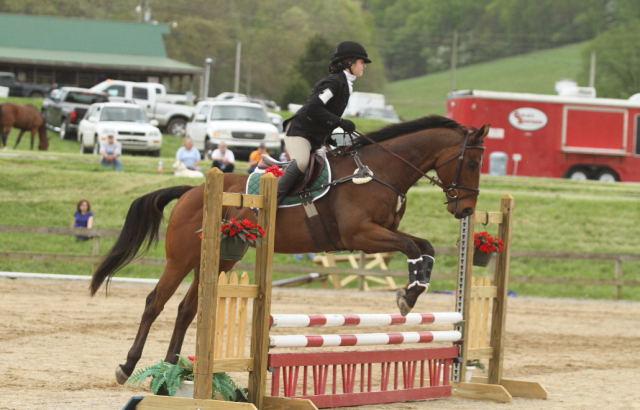 Welter went back to Alex’s in August 2015 for more training and some tune-ups. When the winter rolled around, it seemed like a good idea to send him to Ocala again. He could continue being ridden and trained by a pro and be able to do some shows down there with me. He schooled 3′ with Alex in a jumper show at Longwood and was showing a lot of athleticism. We had planned to go down to Ocala where I could get coaching, compete at Beginner Novice and gain experience.

Our plans would change when I got a call from Alex on Sunday afternoon, in the last week of January. She had said the weekend before that his fetlock had been bothering him mildly; he was put on stall rest for a few days and was soon back in action with no problems. On that Sunday afternoon, Wellie had rolled, stood up wrong, and I heard the dreaded words NO horse owner, trainer, eventer or rider wants to hear.

Dr. Phillip Hammock, our’s and Alex’s vet, had just diagnosed him with a torn oblique sesmoidean ligament in his left hind fetlock. It wasn’t just partially torn; it was torn completely. Would he have to be retired? Be put on stall rest for a year? Would he be able to jump or show again? Was this the end of his career? I had so many questions, and our amazing vet, Dr. Hammock, did his best to answer my flurry of them. He immediately administered PRP (platelet-rich plasma) and put him on stall rest and minimal turnout.

Welter had gone from jumping 3′ to being on stall rest. He was a sweetheart and patiently sat in his stall as he watched all the other horses be ridden, go to shows and jump around. He didn’t start cribbing, stall weaving or trying to bust out. He was the best horse on stall rest and stayed calm in his paddock. My farrier, Greg Dortch, did a wonderful job of keeping and continuing to keep Wellie’s feet in perfect shape and was a huge asset in keeping Wellie comfortable and on the road to recovery. 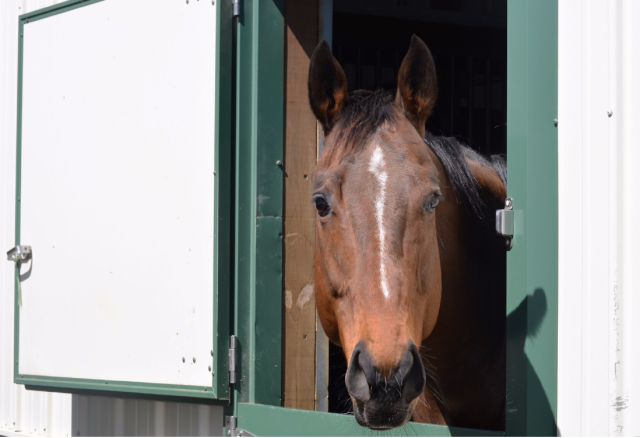 Alex headed back to Tennessee in March and Wellie settled in to a life of stall rest. Dr. Hammock was scheduled to re-ultrasound him at the end of March. On March 26 I received a call from Alex. This would be the deciding factor of the outlook of his injury. The suspense and constant wondering would end here. There were only two answers: either he would be healing and recovering, or he was not healing as planned and needed more stall rest — a setback for both of us.

It turned out that his ligament was healing beautifully, and we couldn’t believe the miraculously fast recovery time. It was amazing. We were all ecstatic and thrilled beyond belief. Dr. Hammock administered another PRP to be on the safe side.

Welter is on a rehab plan of being walked for several minutes each day and can now be on turnout. He is progressing wonderfully, and we hope that he continues to progress. Our plan is, fingers crossed, to start him back over poles in June.

Welter’s injury was a huge setback to my pre-planned event schedule I was hoping to accomplish. Cold water had been thrown on all of my hopes for the season. But putting it all in perspective, owning a horse isn’t all about winning the ribbons, coming in first place, and flying through life without a problem. To me, it’s about the love for your horse, doing what is best for them, and sticking it out with them through all of THEIR setbacks.

Welter has always been a fighter. On the racetrack, I know he fought to come in first every time; in the show ring, he tries as hard as he can to please me and try be just as perfect as he can to make me happy. Things were looking dim with his injury but Wellie proved that he is a fighter, a winner, and knows that he has a very important job.

And as he recovers, I’m not going to rush him and try to get to the first show as fast as I can. I plan on taking my time, and letting him tell me when he is ready to make the next move. He has a heart of gold and throws his whole heart into his job of eventing. Welter is a fighter and knows he has a rider waiting for him whenever he is ready. He is a fighter, because he is pulling through this injury, and he’s a champion because he has won the battle.

I can see the light at the end of the long tunnel, and I know in the long run, we have won the fight and I can’t wait to see what the future has in store for both of us. Whether it be lower-level or upper-level, I will be content just to canter Wellie again for the first time.

I want to give a HUGE thanks to Alex Green for the constant care, watching after, and hugs he has recieved from you. Also, for helping him recover and bringing him back into work. I want to thank Dr. Hammock for the promptness in diagnosing Wellie, the concern and help we received from you in getting Wellie back in action. And Greg Dortch, thank you for shoeing Welter and keeping his feet in wonderful condition so he is ready to go event.

And a final quote that I think was meant for Welter Weight, “When life gets tough, put on your BOXING GLOVES!”