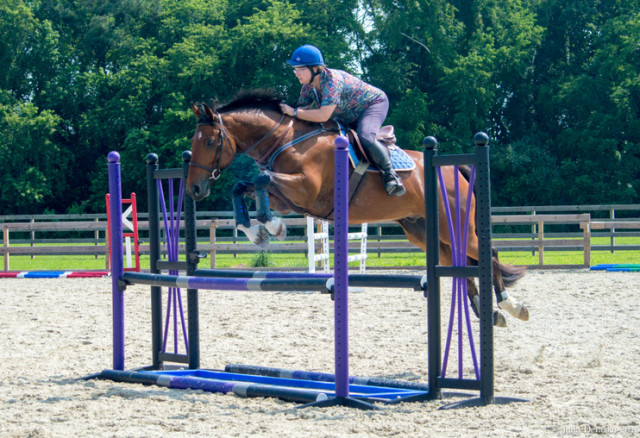 Get riding! Photo by Julia Deraska.

There it goes … another Olympic three-day event, with its beautiful horses from all over the world, the gutting disappointments, and the surprising outcomes — some expected and some delightfully welcomed and richly deserved. You’re a fan, you watch all this stuff, stalk on social media, log in and help crash servers, because everyone wants information and pictures.

We cheer, we fans, and we know when it looks right and good and when it’s not so good. We feel for every gravity-grabbed rail. We sigh for every run-by, slide-out, stop, circle, half-effort or sad fall. I gasped with horror at Lauren and Veronica’s crashing fall and felt an immediate flattening of our hopes that the Americans might finally have the good world class result we are long overdue.

Sadly, no American team finish was in our cards, but we had the good fortune of two of our best going forward into show jumping on some really keen horses we’ve been cheering for a while. We saw Blackfoot Mystery go as an Intermediate horse and Mighty Nice, too, and watched how they were developed and created by their riders, Boyd Martin and Phillip Dutton.

So, when the team dream died, we all let ourselves cry in our beers a little and then we just said, we have four years ’til the next one so let’s get cracking. And while we know Lauren and Clark and all the others will be doing the same thing — putting aside the pain of defeat and getting motivated to get the next four years planned out.

What are you doing in the next few years? Here’s some of our “Olympic” four year plans:

“Do the Novice Three-Day.”

“Have a competitive derby horse”

“Working on my fitness, then starting on dressage year-end awards for next year!”

“Go to a recognized event.”

So there you go. Who among us is not inspired by the beautiful dressage of Ingrid and Michi, and the steady riding of the entire French team, and the absolute wizardry of Phillip and Boyd on cross-country, the heartbreak of Sir Todd? Did you go out and get on your horse at night after sneaking peaks at video the last two days at work? Yep, so did I. We only have three years, 11 months, and 29 days left to go! Get riding!