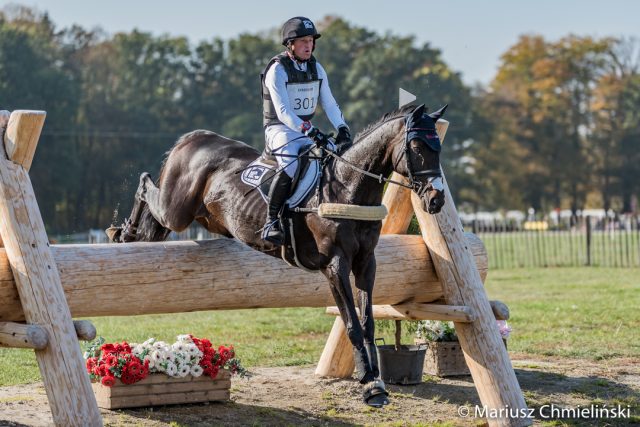 Michael Jung and Lennox 364 at Strzegom. Photo by Mariusz Chmieliński.

It may have seemed like a quiet start to the fall season for Germany’s Michael Jung, who missed out on the 2018 FEI World Equestrian Games due to an injury to fischerRocana FST — though he still made the trip to Tryon to coach Pawel Spizak.

But the reality is Michael has been just as busy as ever. This past weekend in Poland, he took the win in the Strzegom CCI3* with Lennox 364 — Michael’s first major win since Kentucky CCI4* last year and his first CCI3* win since the Blair European Championships in 2015.

Lennox 364, a 10-year-old Hanoverian (Sunlight xx X Heather’s Pride, by Heraldik xx) owned by the Jung family and Erich Single, has been making a comeback from an injury and primarily campaigned this season at CIC* and CIC2* level with Michael’s student Isabel English.

Michael took the ride back in the Nations Cup at Waregem last month in preparation for Strzegom, which was Lennox’s first time back at CCI3* level since finishing fifth at Saumur last year. Lennox led Strzegom after dressage on 25.6 and slipped to second after cross country with 4.0 time penalties added. He then jumped one of five clear show jumping rounds yesterday to clinch the win on 30.0.

“Lennox did a very nice dressage test; he’s a super mover,” Michael said. “I had a great feeling about our ride in the cross country. He’s in a super condition; he jumped everything very easily. The show jumping is not his best specialty, but it went really well. He was really strong and gave me a great feeling. I’m very happy that he’s back after his injury.”

Michael also finished second in the CCI3* with Maria Stein’s Corazon, an 8-year-old Hanoverian (Casillas 2 X Skyline, by Sir Donnerhall) who made her debut at the level. The mare added just 4.8 cross country time penalties to her dressage score to complete on 31.3.

“I’m so proud of little Alfie. At 8-years-old he jumped his socks off around a tough show jumping track with a very tight time to have the very last fence down,” Gemma said. “Obviously I’m personally gutted not to have won, but I’m so pleased with this lovely young horse who couldn’t have tried harder for me all week.”

Strzegom’s October Festival is always a banner weekend in Poland, and this year saw a record 420 horses compete with riders representing 22 different countries. Michael also won the CCI* B section on 28.0 with Go For S, a 6-year-old Hanoverian mare (Grey Top X  Landana, by Colon xx) owned by Faye Füllgraebe.