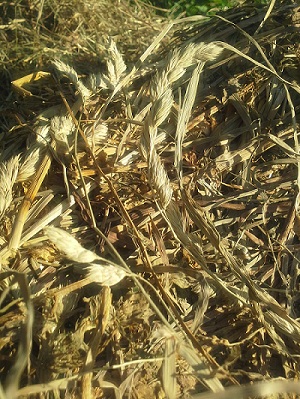 In Part I of the series, we covered the whats and whys of getting forage into a bale.  Last week, Part II explained several varieties of hay and what to look for when you buy.  Now, let’s delve into the numerical side of things: Hay Analysis.

What is hay testing?  Why should hay be tested?  Hay analysis can be used to quantify nutritional value or “feed value” of your hay.  Knowing this nutritional value can help a horse owner develop a balanced ration for their animal, filling in gaps with additional calories, proteins, vitamins, or minerals that may be lacking in the horse’s forage.  Analysis can also be used to grade different lots of hay, to determine which to buy and which to avoid.

How to sample:  using a thin, sharp metal probe and drill, a representative sample from 10-20 bales should be taken.  Insert the probe deep into the short side of the bale (12″)  to get a core sample; empty the contents into a large ziploc bag.  Add in core samples from at least 10 other bales, chosen at random– don’t just find the good ones.  Shake the bag and mix the samples well.  Send this off to a lab for analysis; contact your local agricultural extension agent for suggestions, or see this list of certified forage testing labs (NFTA Certified Lab Facilities – PDF).  Some universities offer testing for free or at very low cost; other professional labs will be more expensive, or charge by the depth of results desired.

You will receive results in the form of a printout sheet; a complex array of abbreviations, acronyms, and numbers.  It can be overwhelming, like trying to read a racehorse’s past performances or trying grasp qualifications for an FEI event.  Here’s an example analysis sheet– I’ve highlighted a few of the terms for discussion. 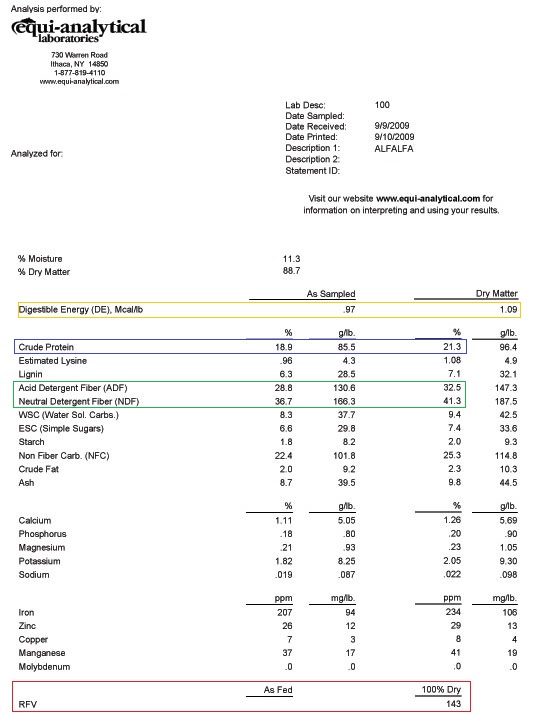 DM = Dry Matter.  Forage contains some amount of moisture, even when dried in a bale.  Live, fresh growing grass is 70-80% moisture; fully-cured hay is generally around 10% moisture.  “DM” is everything in the hay that is not water (protein, fiber, minerals, etc). Percent dry matter is 100- %moisture.  On an average bale of hay, you would expect it to be about 90% DM.

As Sampled refers to the nutrient content on an “as fed” basis, including the moisture content.  100% Dry Matter basis is the easiest way to compare feed values, as moisture content can vary among forages (particularly when accounting for fresh pasture).

DMI = Dry Matter Intake.  This is the amount of dry matter a horse will consume.

–
DE = Digestible Energy (Mcal/lb or Mcal/kg).  This is the calories the horse will consume per pound or kilogram of hay.  An average horse in light work may have DE requirements of 20.5 Mcal/day.  Hay may range from 0.76 to 0.94 Mcal/lb or higher of DE (as fed).  As an example: if a bale of hay has a DE of 1.0 Mcal/lb, the horse in light work must consume 20.5 lbs of that hay to meet his caloric needs.

TDN = Total Digestible Nutrients.  This is a measure of the total digestible nutrients (good stuff) in the hay, including its energy value; this can be used instead of DE or along with DE.  TDN is calculated from subtracting the %ADF.  It may range from 40-55%.  Higher quality hay will reflect with higher TDN.  (Higher number is better)

CP = Crude Protein.  This is the total protein concentration in the hay; as mentioned in Part II, grass hay will average 8-10% crude protein, while alfalfa can be up to 20% or more.  A higher % protein is not always better, as it depends on your horse’s needs (growth, maintenance, pregnancy, etc) and consumption.  Protein can be converted to use as an energy source, but it’s an inefficient metabolic process; excess protein will be excreted in urine by the kidneys.  (You may notice a strong ammonia smell in your horse’s stall if he’s being fed excessive protein.)  Most average sport horse rations (grain and hay) are balanced around 11-12% protein.

ADF = Acid Detergent Fiber.  ADF is a subset of NDF, measuring cellular fiber.  As ADF increases, the digestibility and nutrient availability of the hay decreases.  Good quality forages will have a lower ADF.  When you see ADF, think “digestibility.”  (Low number is better.)

RFV = Relative Feed Value.  RFV is not particularly useful in balancing a ration, but it can be used to compare various forages when selecting hay to purchase.  It combines estimates of digestibility and intake to produce a number reflecting the estimated overall quality of the hay.  For reference, full-bloom alfalfa has an RFV of about 100; early-bloom alfalfa will be higher than that (perhaps 120 or greater).

The Hay Market Task Force of the American Grasslands Council has developed a chart to grade hay on a quality standard system.  Most grass hays will naturally fall towards the “4” category, while alfalfa/grass mixes will grade out a 2 or 3.  Top-quality straight alfalfa will make it as a 1 or Prime.

NSC = Non Structural Cabohydrates.  NSC has become a buzzword lately in equine nutrition; high NSCs in a horse’s ration has become associated with risk of colic, laminitis, and ulcers.  Horses with Cushing’s disease, EPSM, or insulin resistance do best with a lower NSC in their diet.  Grass hay is generally lower in NSC compared to alfalfa (15% to 20%, respectively).  Not all labs offer NSC analysis.

Hopefully this helps clarify some of the confusion about hay analysis.  Keep in mind that the analysis is only as good as the sample provided; the larger the representative sample (20 bales or more) the more accurate it is likely to be.  There will always be some variation among bales, even from the same field.  However, having some values to use as a guideline can be very helpful in selecting what hay you buy, and in knowing what grain or supplements to provide for your horses.